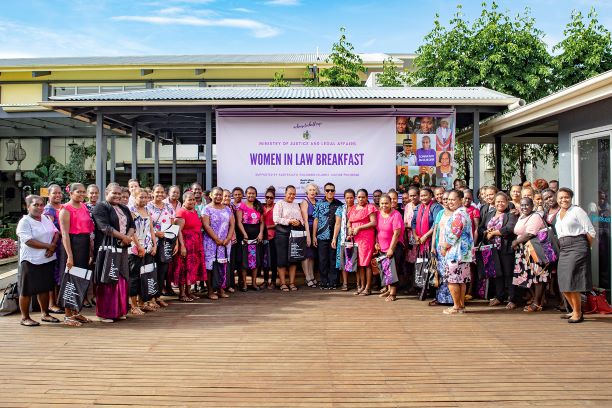 Close to 130 women attended the inaugural Women in Law breakfast hosted by the Ministry of Justice and Legal Affairs (MJLA) today.

The event held to acknowledge and celebrate the contribution of women working in the Solomon Islands justice sector, was the first of its kind, the Minister for Justice, Hon. Makario Tagini, said in his opening address.

“This is the first time for the Ministry of Justice and Legal Affairs to host a special event to mark the occasion of International Women’s Day. I think it is very timely that we do so and reflects my commitment as Minister for Justice to improving gender equality throughout the justice sector,” he said.

Representatives from across the justice sector, including National Judiciary, Attorney General Chambers, Office of the Director of Public Prosecutions, and Law Reform Commission attended the breakfast.  RSIPF, CSSI and other ministries and agencies which work closely with the justice sector were also represented, as well as NGOs and members of the diplomatic corps.

The justice system has traditionally been seen as a male dominated area, the nation’s first female High Court Judge, the Hon. Justice Maelyn Bird observed in her keynote address. 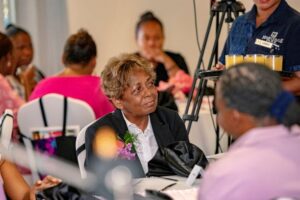 “However, we are seeing more and more women coming to the justice sector, in a range of different roles, including lawyers, administrators, and judicial officers” she said.

“Increasing the participation of women in the justice sector, including at senior levels can make an important contribution to the goal of gender equality,” according to Justice Bird.

The justice sector also has a fundamental role to play in addressing one of the key impediments to gender equality, and that is the prevalence of sexual and family violence. Justice Bird said.

‘Step by Step’, a video introducing the Justice Sector Gender Equality and Social Inclusion (GESI) Strategy, an initiative of the Ministry of Justice and Legal Affairs was screened at the Breakfast.

“The GESI Strategy reflects our aspirations for a robust and independent justice system which is accessible for all people in Solomon Islands, regardless of one’s gender, age, disabilities, socio-economic circumstance,”, MJLA Permanent Secretary, said Dr Paul Mae,  said. 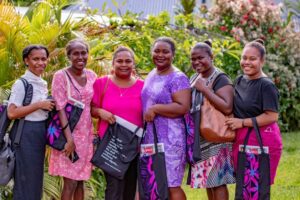 “Including interviews from senior people in the justice system, and everyday people, the video brings home the very real challenges that so many Solomon Islanders, in particular women and children, face in seeking protection through the justice system” said Dr Mae.

“These are the challenges that the GESI Strategy is seeking to address. ”

The event was supported by Australia’s Solomon Islands Justice Program, which is funded by the Australian Government.

The Deputy Australian High Commissioner, Sally-Anne Vincent said Australia’s GESI support for the development and role out of the Justice Sector GESI Strategy sat alongside the support Australia also provided to the effective implementation of the Family Protection Act.

“These investments are grounded in a shared commitment by Australia and Solomon Islands to the importance of an effective and efficient justice system, which is accessible to all people, regardless of one’s gender, age, disabilities, socio-economic circumstance,” she said.