Part 1 of this series provided the background and the rationale underpinning the suspension of SINA as a Trade Union.

The government unequivocally stated that ‘it fully supports all its nurses that are working and serving the people of this country, regardless of where in the country they work, and what role they play, in the provision of nursing services to all the citizens of our country’.

This message was re-emphasised by the Prime Minister in his National Address to the nation yesterday afternoon.

We also asserted that the actions by SINA to pull its members from their rostered duties in defiance of our laws was not a coincidence. It was a planned strategy aimed at bringing maximum pressure on the government at a time the country was expecting an increase in the Covid-19 cases in the country, with the sole purpose of obtaining concession from government at the time it is most vulnerable from the Covid-19 threat.

The Prime Minister announced yesterday we have 5 new cases of Covid-19. The results were delayed because the swabbing teams were not available to do the swabs. These actions delayed the diagnostic work by the laboratory which further delayed the availability of the results which then led to further delays in taking appropriate actions to isolate those patients that were positive.

The consequences of actions taken by SINA in withdrawing the services provided by its members had compromised the process that were established to protect the country from Covid-19.

Part 1 closed with the question, ‘are our Nurses and Nurse Aides really paid as poorly as SINA would have us believe?’

Part 2 of the series provides some idea on the costs to government of the current scheme of service that had been approved by the government for all its Nurses and Nursing Aides in the country.

The information is presented in very summary form for brevity. The sharing of this information has been discussed with the Ministry of Public Service.

The government is proud to be able to share this information to inform the public how much the government values its nurses, and how much it is investing to remunerate and retain its nurses.

While the country  may not be able to remunerate our nurses as well as other countries, within the Solomon Islands Public Service, our Nursing profession stands tall in how the government recognises and remunerates them.

The government believes our nurses deserve the packages they receive under their scheme of service. By the same token, the government hold nurses accountable to be faithful to their calling and to respect the Nurses Pledge in what they do.

The Nursing Scheme of Services comprises the base salary plus five other category of allowances including (i) special duty allowance, (ii) multi allowance, (iii) danger allowance, (iv) risk allowance and (v) posting allowance.

The following table presents a summary of the ‘total taxable gross package’ based on one salary point per level from Level 3 through to Level Super Scale 1. Its purpose is simply to show how the base salary changes when all the allowances are added. The calculations are based on Tier 1 figures. They therefore represent the lowest levels a nursing staff could draw in each salary point.

The table shows the gross fortnight, and gross annual packages for the nursing profession and it also show the gross annual package the majority of Public servants receive for the same level, based on base salary alone (as they do not have the 5 allowances). The last column shows the % difference between the annual gross package received by the nursing profession above the equivalent package received by much of public servants.

The Nurses have been extremely well looked after by the government. Their allowances are unequalled by much of the public service. The risk allowance caters for airborne diseases such as Covid-19 for which Nurses have already been receiving a fortnightly allowance, many without even facing such risks.

It was against this scenario that the government had bent over backwards to accommodate the various dangers, risks, inconveniences etc. faced by our nurses to agree on a Scheme of Service that puts our nursing profession in the country on a pedestal that is unequalled by much of the public service. This made it exceedingly difficult for any reasonable government to once again be forced to pay even more allowances. There is no other level 3 Officer in the Public Service that receives a fortnightly package of $2.212.51 and an annual package of $57,525.26. This package is equivalent to the annual  gross package for a level 8.5 officer in the public service. Yet this is for a level 3.1 Nursing Aide.

As SINA chose to hold the government and the people of this country at ransom, and tried to pull at the heart strings of the general public to make the government look bad, it is time we move away from baseless allegations and emotions to facts, and therefore the government has a duty to inform the people of this country that it has invested in our nursing profession and it believes the nurses deserve their pack ages, but to keep on asking for more at the expense of the rest of our citizens is against their Nursing Pledge and uncalled for.

The government hopes the nursing profession can now move forward with its mission of serving the people of this country. 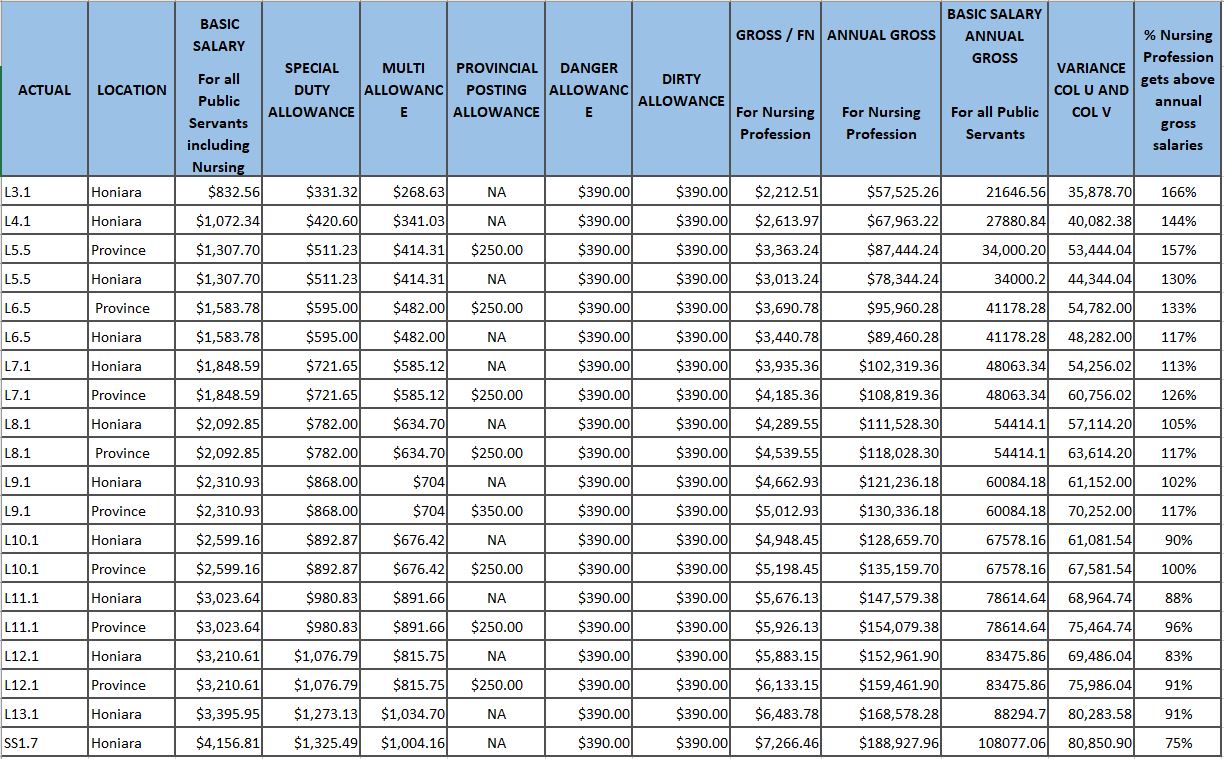