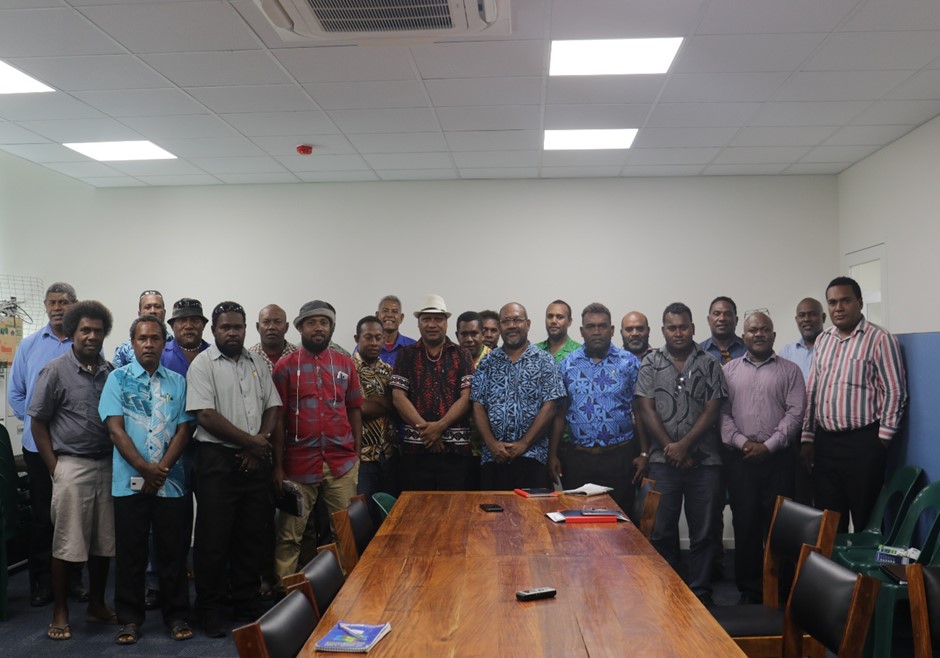 SUIDANI AND DELEGATION GET CLARIFICATION ON ISSUES

The National Government through the Officials from the Ministry of Provincial Government and Institutional Strengthening (MPGIS) met with Suidani’s 18-man delegation comprising Ministers of the Provincial Executive and Assembly members and Officials to find ways to sort out differences in opinions on issues affecting the Province.

Permanent Secretary of MPGIS Dick Stanley Pirione said the initial dialogue last Friday will not immediately solve the issues raised by Suidani in the media but to find a better way where leaders can continue to support each other in pursuit of policies and issues confronting both the National and Provincial Governments.

Mr Pirione said the concerns and issues raised by Suidani must be addressed in a holistic way because it will also have impacts on other Provincial Governments and that should be considered as the best way forward.

“Any province wishing to carry out such Programmes need to seek legal advice and should be properly guided on how to carry out its responsibilities,” he added.

On the issue of the protest in Auki on 7th September, explained that protest march is deemed illegal because organizers do not get permission from relevant authorities under the Procession and Public Assembly Act Cap 29 before proceeding with the protest.

Pirione further explained to Suidani and his delegation that the use of MPG Assets such as vehicles to transport protestors to work against the National Government is deemed illegal and unlawful.

PS Pirione further explained that the Malaita Provincial Secretary, Fredrick Fa’abasua was recalled on the grounds under clause 2 of his contract and General Orders section 106(1).

Premier Suidani further denied any involvement with last week’s peaceful march. “I ordered the government vehicles with Malaita province security officers to ensure safety of all involved in the march. I want to ensure the march is peaceful,” said Premier Suidani.

On the referendum, Suidani said his intention was to seek legal advice from the Attorney General’s office once they complete a sort of community poll on who is for and against the proposed referendum.

As a way forward to ease current tensions and work together going forward, it was agreed; some of the issues confronting Malaita are beyond the jurisdiction of the Ministry of Provincial Government and Institutional Strengthening in which case, the Ministry will liaise with the Government to see how these issues can be addressed.

Further dialogue involving Malaita members of Parliament and MPAs are encouraged to pave a way forward so that issues that can potentially benefit our provinces and Solomon Islands can be discussed amicably. Continuous dialogue will be brought to the attention of the Caucus and Cabinet.

The Permanent Secretary has advised Premier Suidani that the request for PS Fa’abasua to remain at Auki will be discussed with relevant authorities. Mr. Fa’abasua is advised to remain at Auki awaiting further advice either from the MPGIS or the Ministry of Public Service. In the meantime, his recall still stands.

The meeting itself paved a positive way forward for the MPG and the MPGIS.