Mrs Pauline McNeil centre with member of MHMS Senior Executive Management and all stakeholders showing the Healthy Settings Policy and its Implementation Guidelines after the launch at Mendana Hotel.

The Permanent Secretary of the Ministry of Health and Medical Services (MHMS), Mrs Pauline McNeil has this week launched the National Healthy Settings Policy, a key product from the Health Promoting Village Project implemented in 15 communities since 2016. Six (6) in Guadalcanal and 9 in Makira Ulawa Provinces since 2016. 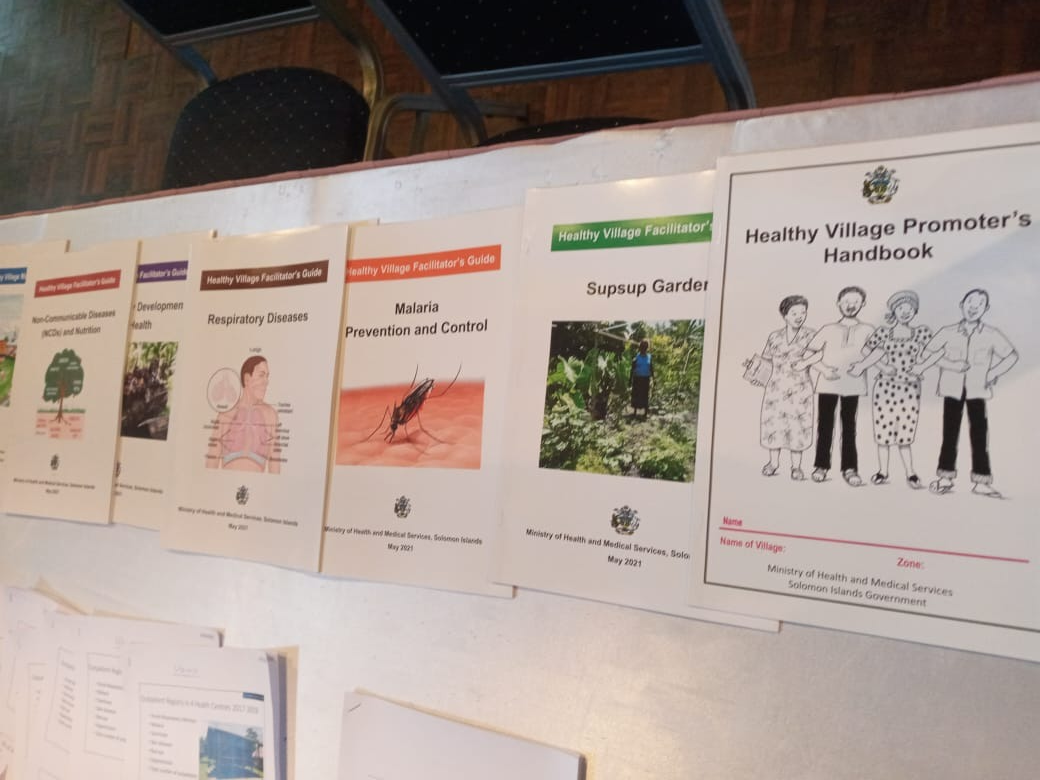 Some of the policy and technical guidelines for health promotion in various settings eg market, workplace, village, school, etc

Launching the policy, Mrs McNeil thanked all those involved in the project describing the success as another milestone.

“I salute you all with thanks for the job well done in developing these well informed and evidence-based policy documents, a milestone indeed in health’s efforts to move the country towards the healthy islands visions established among all Pacific countries in 1995, which Solomon Islands was part of”.

The five years project, which was implemented by the Ministry in partnership with JICA who provided the financial and technical support, will come to an end in June. 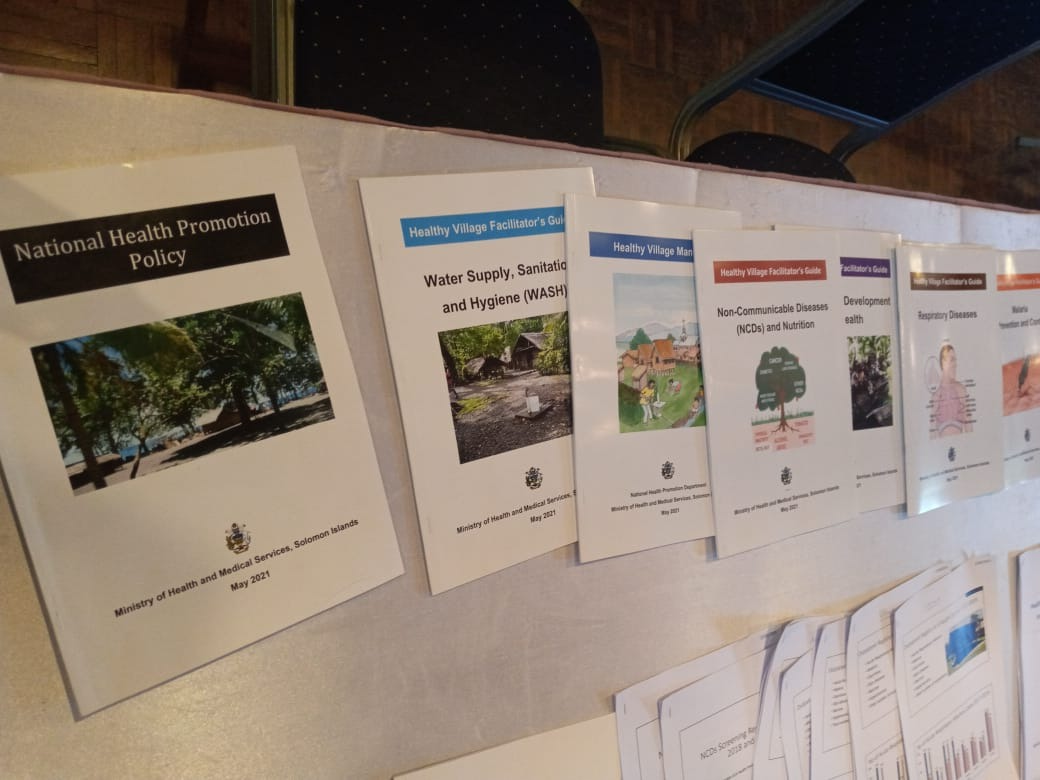 Some of the policy and technical guidelines for health promotion in various settings eg market, workplace, village, school, etc

“Now that the project has come to a closure, the MHMS will ensure that the project’s objectives will roll out into the Health Promotion Divisions Annual Operational Plans jointly with other key stakeholders and ministry partners”,

“Thanks to the government and people of Japan for the support in the past years and despite the end of your support, the package of policy documents, technical guidelines, tools and materials including the healthy village manual produced from this project will greatly enable us to upscale to other communities in other provinces and ensure its sustainability”, stated Mrs McNeil. 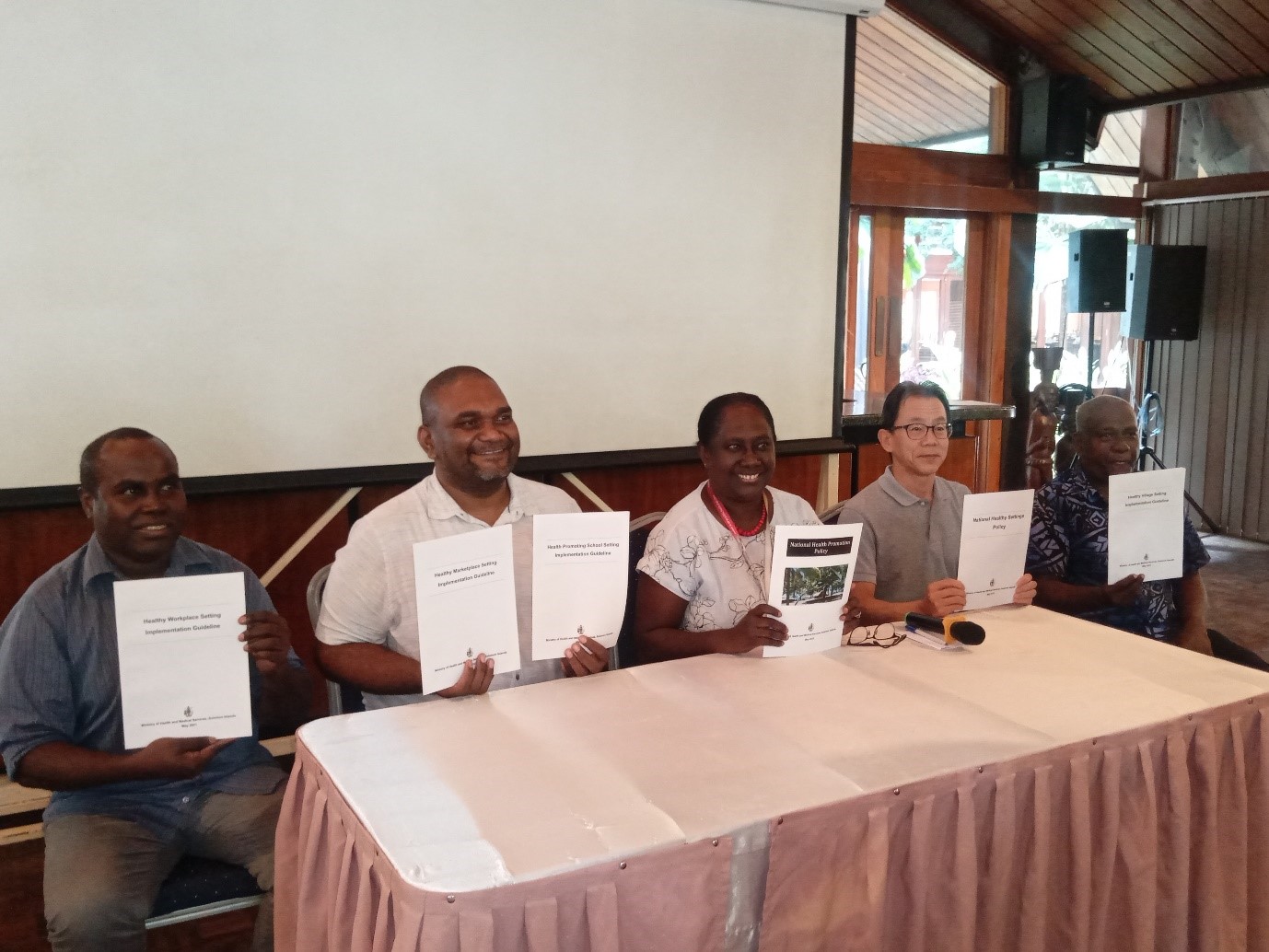 Health PS and Deputy Secretaries with Representative from JICA showing the policies at the launch.

She explained that these important documents advocate for partnership with relevant government ministries, non-government organisations, and across health sectors and various levels of governance within health.

“Therefore I call for strengthening and expansion of partnership, cooperation and collaboration as these has proven to be important key ingredients towards the success of implementing the Health Promoting Village Project”, highlighted Mrs. McNeil.

The documents produced from the project are very relevant towards the fulfilment of the Ministry’s National Health Strategic Plan 2016-2021-pillar number 2, which is building strong partnerships and Health’s Role Delineation Policy (RDP) which recognizes the healthy islands initiatives as a way forward to address community welfare and health for the general population.

The policy was launched during the third meeting of the National Healthy Settings Coordinating Committee, which consists of stakeholders from the key government ministries including the Ministries of Provincial Government, Education and Human Resources Management, Women, Children, Youth and Family Affairs and Infrastructure Development, SINU, as well as churches and JICA.

The Ministry of Health through its Health Promotion Department in tandem with these Committees will continue to take the lead with upscale of the project and eventually to all provinces. .