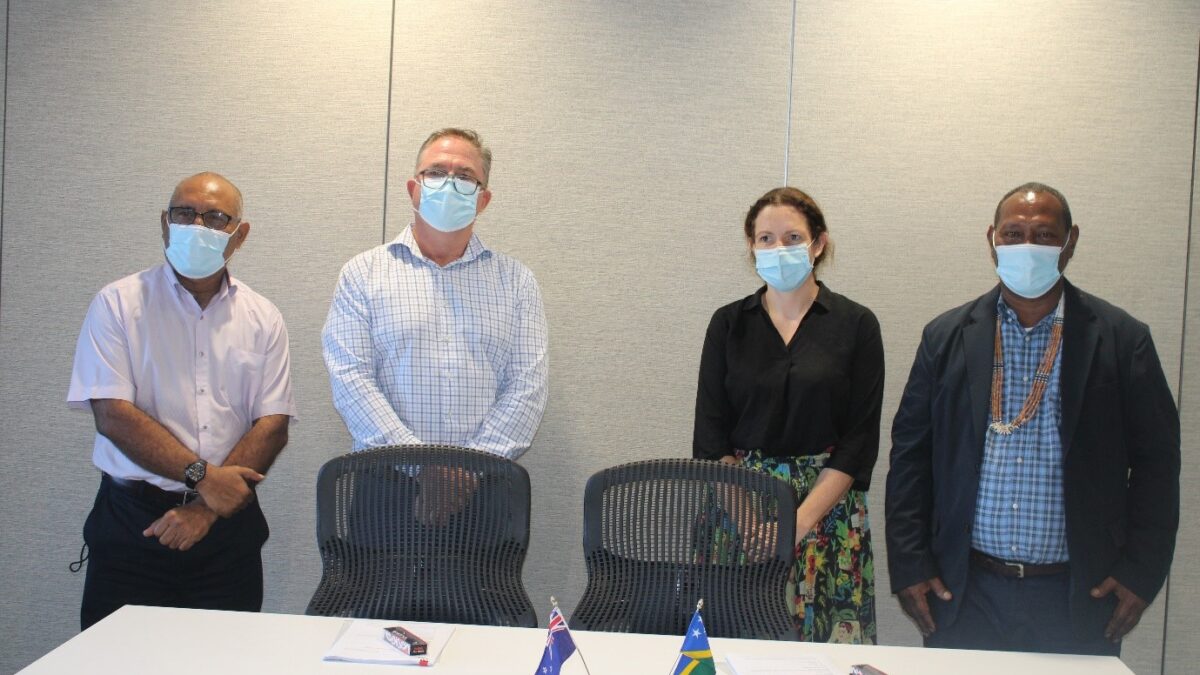 The Minister of Fisheries and Marine Resources (MFMR) Hon. Nestor Giro has praised the signing of a new contract between Aotearoa New Zealand and John staff International Development (JID) on 25 November 2022 at the New Zealand High Commission office.

JID’s CEO Mr. Darren Morgan, and New Zealand Deputy High Commissioner to Solomon Islands, Kate Bradlow, penned their signatures to formalize the agreement that was witnessed by a delegation from the Ministry of Fisheries and the Bina Harbour project team led by the Minister of Fisheries Hon. Nestor Giro, his Permanent Secretary Dr. Christain Ramofafia, and representatives of the International Finance Corporation, and New Zealand’s Ministry of Foreign Affairs and Trade (NZ MFAT).

JID was selected to manage the Bina Harbour Project Office after a competitive tender process, led by NZ MFAT and MFMR over the past few months.

Under the contract agreement, JID will provide technical management and coordination of the Bina Harbour project for the next five years. The project office will be based in Honiara initially alongside the MFMR, and working closely with communities in Bina through an office to be established in Auki.

The Project Office will drive the Bina Harbour development forward over the coming years, coordinating between partners, commissioning design and feasibility work, and liaising with all key stakeholders including the Solomon Islands Government and Malaita Provincial Government. The Minister said the signing marks a great step forward for the project.

“The signing marks a major milestone in Government’s determination to make the best use of our God-given tuna Resources by attracting investment in processing our tuna resources, in our country, by our people, and thus capturing more of their value for generations to come”.

He went on to note that MFMR has made remarkable progress with the project through the work of its Project Management Division over the past two years, and the longer work of the community engagement and land settlement team, both supported by the New Zealand through the Mekem Strong Solomon Fisheries program.

Hon Giro said, “The Solomon Islands Government believes that the Bina Harbour Project holds out the promise of satisfying the long frustrated goal of bringing real development to Malaita, and our country, by sparking economic growth, providing jobs and livelihoods, and enhancing social equity”.

He went to note that the Government is very appreciative of the strong, long-term support that New Zealand has provided to the Bina Harbour Project, including the financing of numerous technical studies, support for the present Bina Harbour Project team, and support for the Bina Region Arrangements for Governance (BRAG) unit within the Ministry that will safeguard the interests of the Bina and Langalanga communities that hold rights over the land, water source and harbour access required for the project.

Hon. Giro in his closing remarks offered his best wishes and noted his high expectations of JID on behalf of the Government and MFMR.

“I welcome you, JID on behalf of the Government and MFMR and I wish you well in this great endeavour. We know you have a strong track record of delivering complex projects in the region and we trust you will make the best use of your skills and experience to support and manage the Bina Harbour project.”