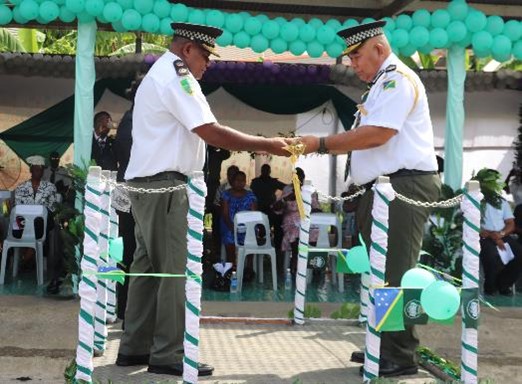 Commissioner Gabriel Manelusi retired from active service after serving the Solomon Islands Government under the Ministry of Police National Security & Correctional Services (MPNS&CS) for  a total of 37 years; 34 years with RSIPF and 3 years with CSSI as a ‘Commissioner’. 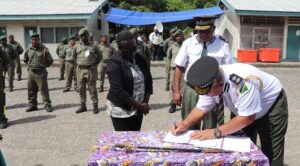 Commissioner Mactus Forau signs the handing and taking over certificate as witnessed by Permanent Secretary Qalokale.

Gabriel Manelusi joined the RSIPF for more than three decades, before he downs his sky-blue uniform, which he wore during his 34 years with the RSIPF and puts on the jungle green uniform as the new Commissioner of Correctional Service Solomon Islands in May 2019. He then retired from active service on November 2022.

In his final speech, outgoing Commissioner Manelusi said, it has been a great honour of my professional career to serve as your Commissioner since taking up the role on 10 May 2019.

“I wish to acknowledge the Solomon Islands Government and all government ministries, Hon. Minister of MPNS&CS Anthony Veke,  Permanent Secretary and her ministry staff, provincial premiers, lord mayor, counsellors and provincial assembly members, constitutional post holders, diplomatic missions, business houses and companies, church leaders both SICA and SIFGA, NGOs, traditional leaders, women leaders, youth leaders, people with disabilities, media, farmers, fishermen, all inmates across our country, incoming commissioner, executives, commandants, directors, ranks and files, CSSI families and all our good people of SI. I thank you all for your great support, consent, cooperation and prayers during my leadership for three (03) years as a Commissioner of CSSI”.

“May I also record special thanks to the Australian Government for all your support. ICRC, SIRC, UNDP, Churches, Service Providers for your great support to CSSI during the height of COVID 19. All your support result no death recorded in CSSI, thank you so much”.

“While there will be challenges ahead, I believe that CSSI is more than capable of dealing with any issues it confronts”.

“I believe that it has regained the trust and confidence of the community and such strategic initiatives such as the peacebuilding, prevention, rehabilitation strategy will ensure that our service delivery continues to improve to our inmates and our people”, says Manelusi. 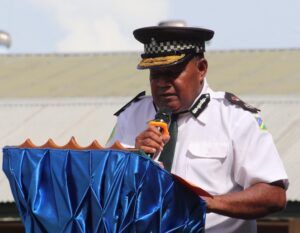 He urged Correctional Officers to maintain a high sense of discipline and standard and extend the same cooperation and support to the incoming Commissioner.

Guest of honour Permanent Secretary MPNS&CS Services Mrs. Karen Galokale says, it is an honour indeed to represent the Minister MPNS&CS and be part of the parade this morning to bid you farewell, Commissioner Manelusi.

“You took the helm of leading the CSSI in mid-2019. Looking back, you came from RSIPF, a policing background. Regardless of that background, you stood firm and provided that professional leadership in leading the correctional services to another new height”.

She said you have made remarkable contributions to the Correctional Service with regard to these important policies and projects. Today, I may not mention all you your achievement, but as the Secretary, responsible for correctional services and representing the government, I am so confident to say that the Correctional Services of Solomon Islands has achieved a lot under your leadership.

Meanwhile, incoming Commissioner Mr. Mactus Forau says, “I salute you for the good work and the strategic frameworks that you have established and embedded in to the organisation, I will continue the good works to elevate CSSI to new heights and levels”.

“Thank you for your tremendous dedication and leadership to CSSI and to where it is today”.

“I wish you and your family Gods blessings and best wishes on your next endeavour”.

The ceremony successfully ended with presentation of gifts and cultural entertainments by correctional officer’s ethnic groups.