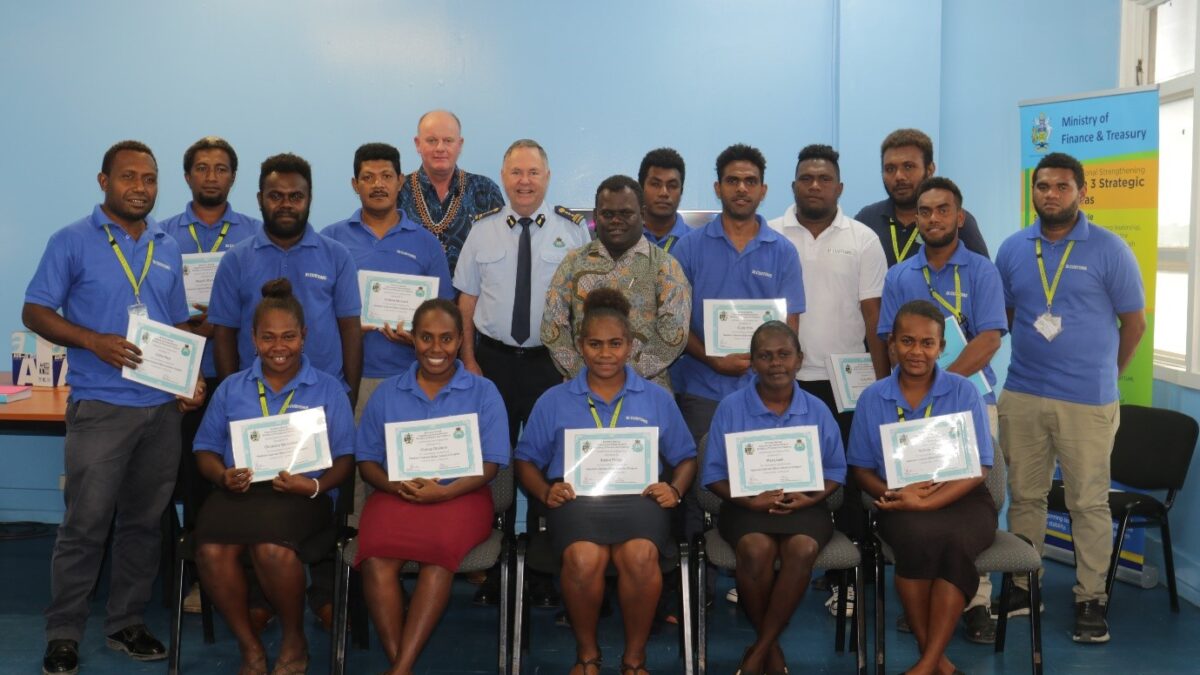 PS Dentana together with Customs Comptroller Mr. Sutton and Facilitator Stuart Millan in a group photo with the fifteen officers who have completed the induction program last Friday.

Fifteen new Customs Officers have been awarded with a Certificate of Completion, last week, following a 4 months intensive training.

The new officers were recruited under the graduate program of the Ministry of Finance and Treasury, in accordance with the Public Services recruitment guidelines.

Speaking during the graduation ceremony, Permanent Secretary of the Ministry of Finance and Treasury Mr. Mckinnie Dentana noted the efforts of everyone involved in implementing the reforms and was pleased with the achievements to date.

“During the last twelve (12) months, the Ministry of Finance and Treasury had embarked on major reforms, especially in the Customs and Exercise Division and within the Inland Revenue Division”, said PS Dentana.

According to PS Dentana, there are three components of the Customs and excise reports.

These include the strengthening of the Division’s management, identifying institutional and systematic weaknesses and taking corrective measures, staff recruitment and training and capacity upgrading of the Division infrastructures.

The Permanent Secretary congratulated the 15 new Customs Officers and strongly encouraged them to uphold their integrity and professionalism at all times.

PS Dentana also confirmed that the recruitment of the new Customs Officers was very timely in terms of collecting the necessary revenues to finance the Government 2021 Budget.

Since Monday this week, all 15 new Officers have been deployed to various sections within the Customs and Excise Division.

Mr. Dentana took the opportunity to convey his gratitude to the Australian Government through the Australian Solomon Islands Resources Facility for their continuous support towards the modernisation and reform exercise within Customs and Excise Division.

He noted that a well- resourced organisation equipped with adequate staff with the necessary knowledge and skills is vital for not only the Custom and Excise Division, but also the nation as a whole.

The Ministry of Finance and Treasury through its Customs and Excise Division is fully committed to protect government revenue and ensure the accountable and transparent implementation of government policies in the interest of economic empowerment and national stability and development.