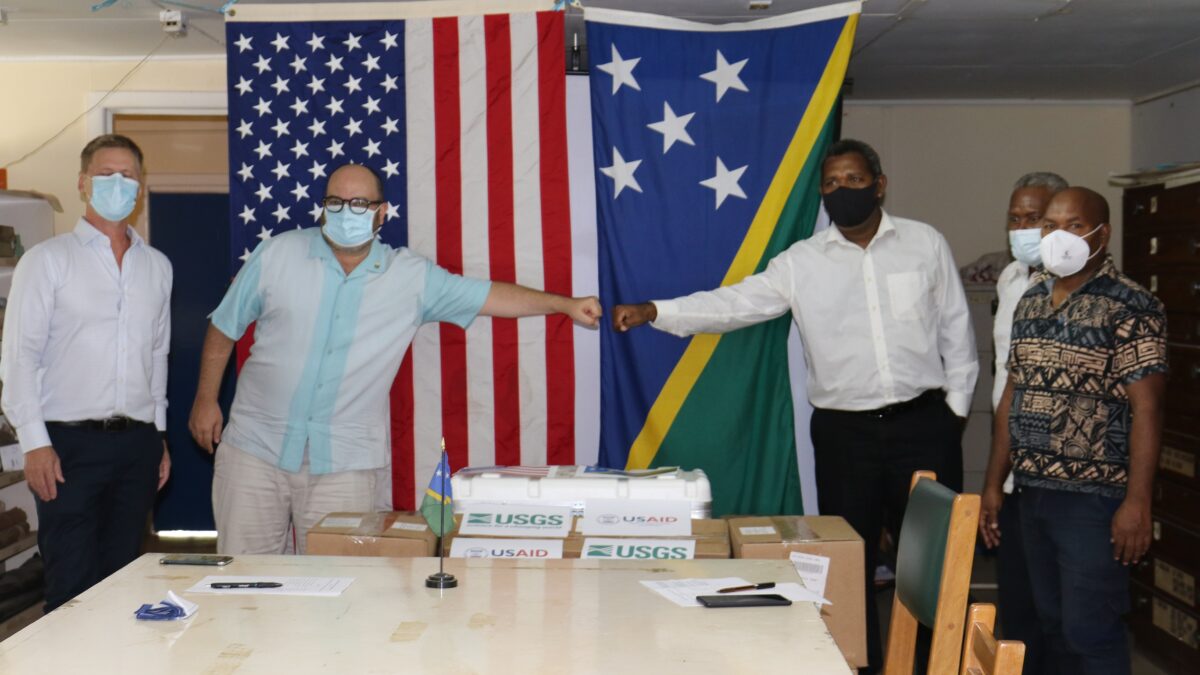 1. Permanent Secretary of the Ministry of Mines, Energy and Rural Electrification (MMERE), Dr Chris Vehe Sagapoa, on behalf of the Solomon Islands Government thanked the US Government for their timely support to bolster the Geological Survey Division efforts in monitoring of Savo volcano. 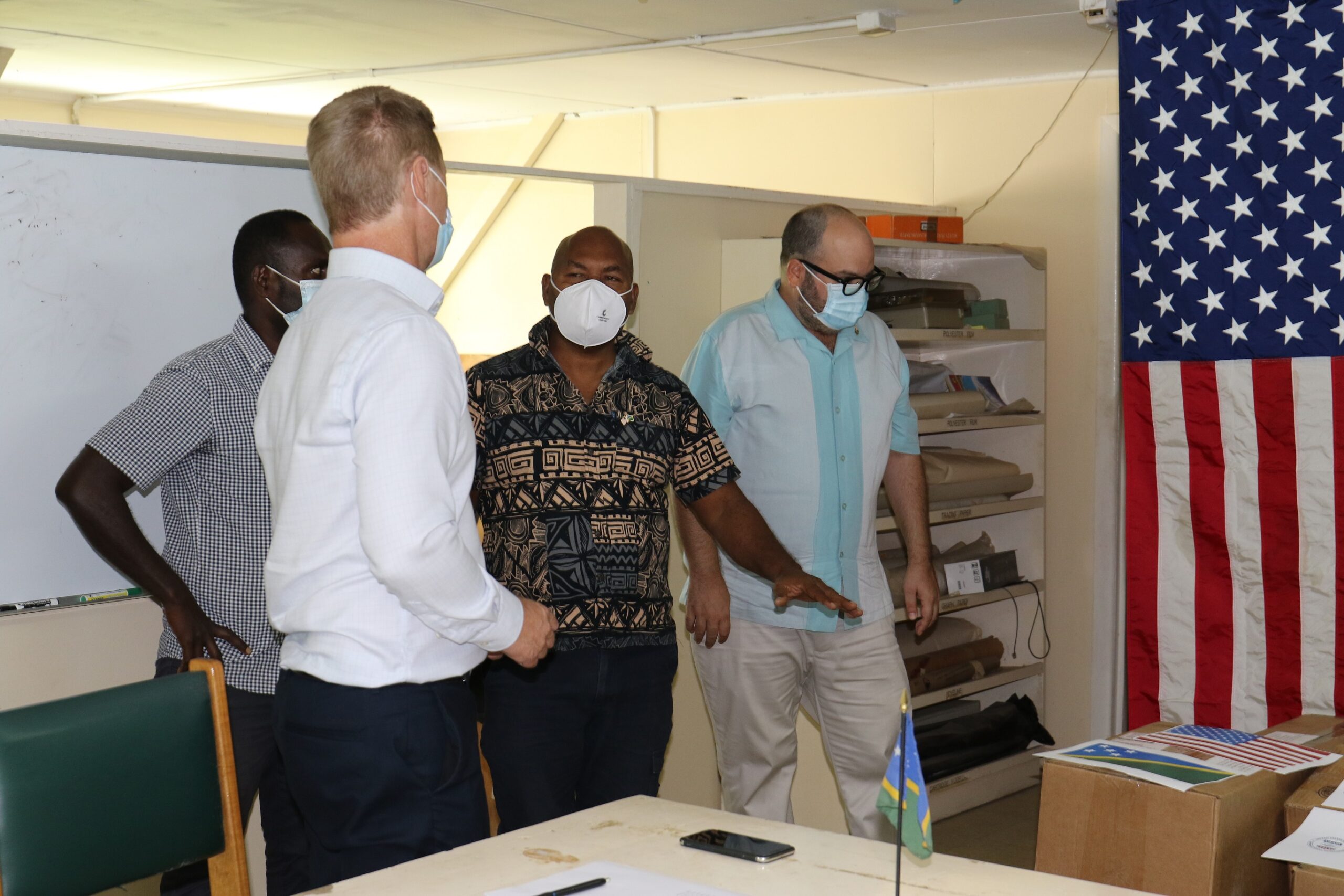 2. Chief Geologists Mr. Thomas Toba says his team will travel to Savo Island to install the system once the COVID-19 situation in the country improves. 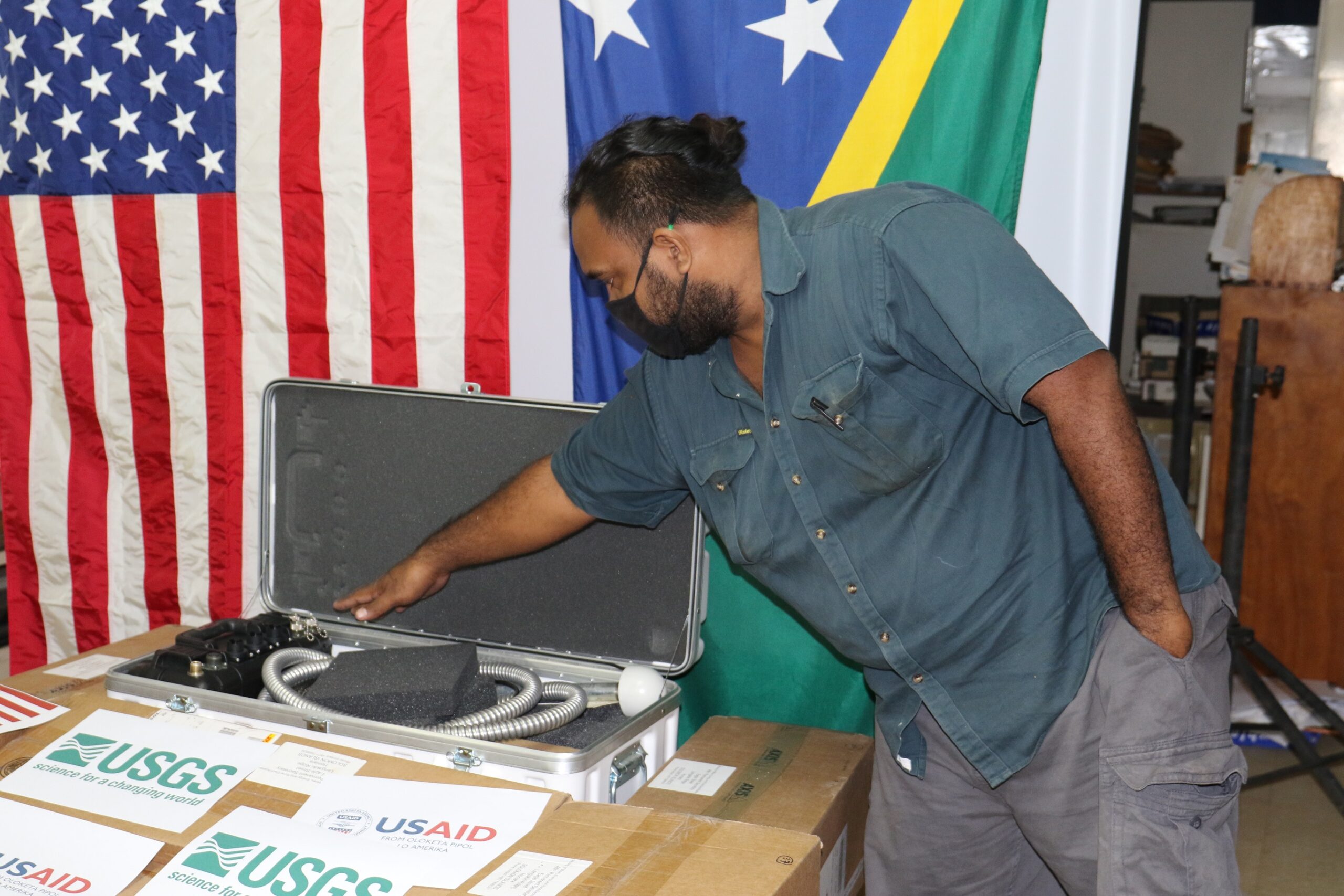 3. Geophysics Officer at the Geological Survey Division, Jack Ben Gwali, going through and explains the state-of-the-art equipment which costs USD90, 000.

United States Government has stepped in to support the Solomon Islands Government Geological Survey Division by handing over sets of volcano monitoring equipment.

The state-of-the-art equipment with a total cost of USD90, 000 will aid in improving the seismic monitoring of the active Savo Island Volcano, Central Islands Province.

During a short ceremony today, Permanent Secretary of the Ministry of Mines, Energy and Rural Electrification (MMERE), Dr Chris Vehe Sagapoa thanked the US Government for their timely support to bolster the Geological Survey team’s effort in monitoring of Savo volcano. On top of that is the potential training opportunity that this relationship perhaps source from United States Geological Survey (USGS) in the future.

Dr Vehe said the hand over event not only is a graceful one to the Ministry but it also highlight the historical relations USA had with the Solomon Islands.

“The Savo Volcano has been under monitored since 1960’s with limited resources, capacity and competency in the Seismological section.”

Dr Vehe also thank agencies such as USGS, United Nations Development Programme (UNDP), National Disaster Management Office (NDMO) and other regional geological networking such as Melanesian Volcano Network (MVN) group, New Zealand Geological & Nuclear Sciences group in New Zealand for being part of the correspondence chain which resulted in a successful purchase and arrival of the equipment in the country since last year.

“Now that the equipment is here, rest assured our people on Savo and surrounding communities in the Central Province should be comforted and develop elevated confidence on our Seismological team plus National Emergency Organizing Committee (NEOC) on monitoring, information sharing and making informed decision to deal with potential disaster hereafter.”

Director of the U.S. Embassy Office in Solomon Islands, Russell Comeau, in response said they are honoured to continue supporting the country with scientific expertise by way of donating the monitoring equipment upon receiving the request.

“This equipment will help unravel the mysteries behind volcanic eruptions as data collected will be shared with scientists around the world to protect humankind.

“The donation also represents another tangible demonstration of the friendship between the US and Solomon Islands, one which started many decades ago,” Mr Comeau remarked.

US Consulate Office representative, William Pryor, who also attend the handing over ceremony said they are looking forward to work in close collaboration with the geological team.

Chief Geologists Mr. Thomas Toba briefed that his team will travel to Savo to install the system once the COVID-19 situation in the country improves.

He also extend his sheer acknowledge towards the US Government for the crucial equipment which will augment those existing 5 monitoring systems in the provinces.

Reports of the increased volcanic seismic on the island in July 28th 2021 has prompted the Government issuing alert notice to those identified in the impact areas.

From recorded history and traditional accounts, the Savo Volcano is known to be active in the late 1400s, 1500s and the last eruption could have happened around 1830-1845. Past and recent scientific studies also determined that the Savo Volcano could become active again after 200-300 years of being dormant which is present years.