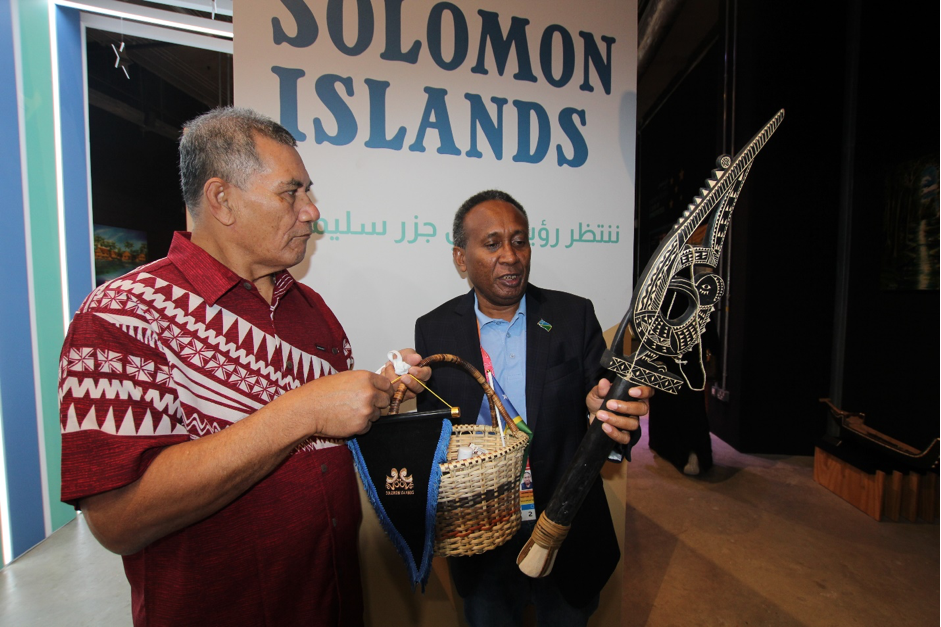 The Prime Minister of Tuvalu Honourable Kausea Natano paid a visit to the Solomon Islands Pavilion on Tuesday 9 November.

Prime Minister Natano was greeted by Deputy Commissioner General and Pavilion Director Mr Dennis Marita who first reciprocated the visit with a traditional chant from his province of Makira before taking PM Natano on a brief tour of our Pavilion.

Prime Minister Natano said that he was familiar with some of the cultural artifacts on display, especially the few from the Western Province of the country as he was also present in the Solomon Islands when Independence was attained on July 7, 1978.

DCG Marita said that PM Natano’s visit to the Solomon Islands Pavilion had further reinforced a sense of bondage especially in our efforts to mitigate the effects of Climate Change and where Tuvalu amongst other Small Island Developing States (SIDS) and being the planet’s fourth-smallest nation, are facing extinction because of climate change as a result of rising seas and deadly storms that have reportedly started to swamp the islands, and fears are growing that Tuvalu will be uninhabitable or may vanish entirely within a few decades, and so we all need to collaborate more in supporting each other and to have a unified voice to champion our concerns”.

DCG Marita also presented a basket filled with SolTuna and Kokonut Pacific products as a token of appreciation for PM Natano’s visit.

Prime Minister Natano was returning to Tuvalu after attending the High-Level Segment of the Twenty-Sixth Conference of the Parties to the UN’s Framework Convention on Climate Change (COP26) in Glasgow, Scotland.