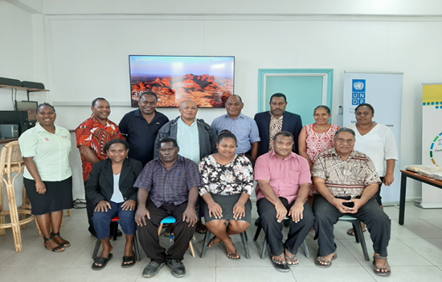 This workshop was organised by the TDP a division within the Ministry of Commerce Industry Labour and Immigration (MCILI).

The TDP is an office independent in its operation as the Administrator of the TDP Act and other related labour laws within its ambit. It is a quasi-court which deals with trade dispute matters, unfair dismissals and redundancy issues. These are important labour matters which affect Solomon Islands and its workforce.

The importance of the workshop for Panel Members and TDP court users is threefold.

Firstly, this workshop allows for Panel Members and court users to educate themselves about the function and the requirements and expectation of the Panel of them during court hearings.

Thirdly, it is aimed at preparing all parties to fully utilize processes in place to properly assist the Panel and court users.

The activities prepared covered all relevant procedures and processes from the beginning of a matter to its completion. This is important so that all stakeholders appreciate what the TDP is and can assist satisfactorily in dealing with labour issues whether it be from an employee or employers point of view.

The Panel requires a well-informed membership and fully armed and equipped labour representative to be able to deal with issues brought before it.

A total of nine participants attended this workshop representing the employers, employees, a union representative, and also Labour Division officers.

The workshop was officially opened and closed by the Deputy Secretary (Hunter Masuguria) of the Ministry of Commerce Industry Labour and Immigration.