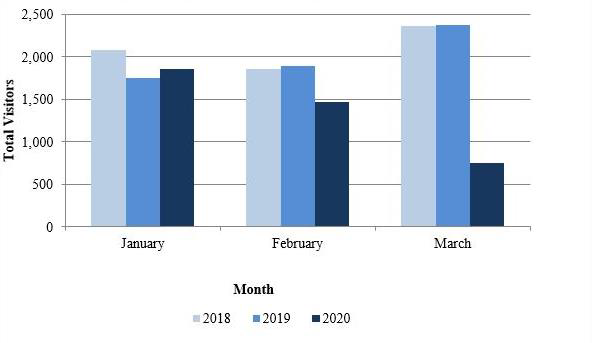 Tourist arrivals fall 48.6 per cent due to COVID-19

The number of tourist arrivals in Solomon Islands fell 48.6 per cent in the first quarter of 2020 due to impact of coronavirus (COVID-19) pandemic worldwide and in our region, the Solomon Islands National Statistics Office said, Wednesday 3 June.

Government Statistician Douglas Kimi while releasing the International Arrivals statistical report said a total of 8,340 arrivals were recorded in the first quarter. “This is a decrease of 48.6 per cent compared to the previous quarter (4th quarter 2019).

“Compared to the same quarter a year ago, a decrease of 29.6 per cent was noted,” Mr. Kimi said. Visitors from Australia, biggest source of tourists, tumbled 41.0 per cent to 1,626 in Australian visitors compared to the fourth quarter of 2019 figure 2,757.

“Arrivals by country of residence for the first quarter 2020 showed that Australians remain the largest group of visitors to the Solomon Islands with 39.9 per cent, however, there was a decrease of 41.0 per cent to 1,626 in Australian visitors compared to the fourth quarter of 2019 figure 2,757. The next largest group of visitors were from Other Asians with 10.3 per cent, followed by Fiji 9.7 per cent, Papua New Guinea 7.8 per cent, New Zealand 6.9 per cent, Other Pacific 5.6 per cent ,United State of American 5.1 per cent and Japan 2.5 per cent.

“Visitor arrivals by month showed that January recorded the highest number of arrivals in the first quarter of 2020 with 1,857 visitors followed by month of February with a total of 1,471 visitors and March the least with 752 visitors.

“First quarter 2020 recorded a total of 1,405 tourists and they spent an average of 14.3 days in the country. Australian residents still made up the highest proportion of tourists with 42.3 per cent for the quarter and stayed in the country for an average of 15 days. Residents from Other Asia made up the next largest group of tourists with 8.5 per cent, followed by Other Pacific 8.4 per cent, Papua New Guinea 6.0 per cent and United States of America 5.8 per cent.

“The most common reason for visitors visiting the Solomon Islands during the quarter was for Holiday and Vacation with 28.1 per cent followed by visiting for other Reasons 25.0 per cent, Business and Conference 24.3 per cent, Visiting friends and relatives 16.3 per cent and Transit & Stop over 6.3 per cent.

“Visitor by Occupation showed that the “Other occupation” category made up the largest percentage of occupations with 41.7 per cent during the quarter followed by “Professional and Technical” 30.3 per cent, No work 11.4 per cent, Administration and Managerial position 9.1 per cent, and Production and Related work 3.1 per cent.

“The most popular carriers during the quarter were Solomon Airlines who carried 53.2 per cent of total visitors, followed by Air Niugini 20.4 per cent and Virgin Australia 16.4 per cent.
Meanwhile, arrivals by country of residence to Munda for first quarter 2020 showed that Australians recorded the largest group of Visitors with 81.5 per cent followed by visitors from New Zealand with 7.5 per cent and Other Asians with 3.5 per cent of the arrivals.

Mr. Kimi also advised that it highly likely that tourist arrivals will continue to decline in forthcoming quarters due to impact of the COVID-19 (Coronavirus) worldwide and in our region.