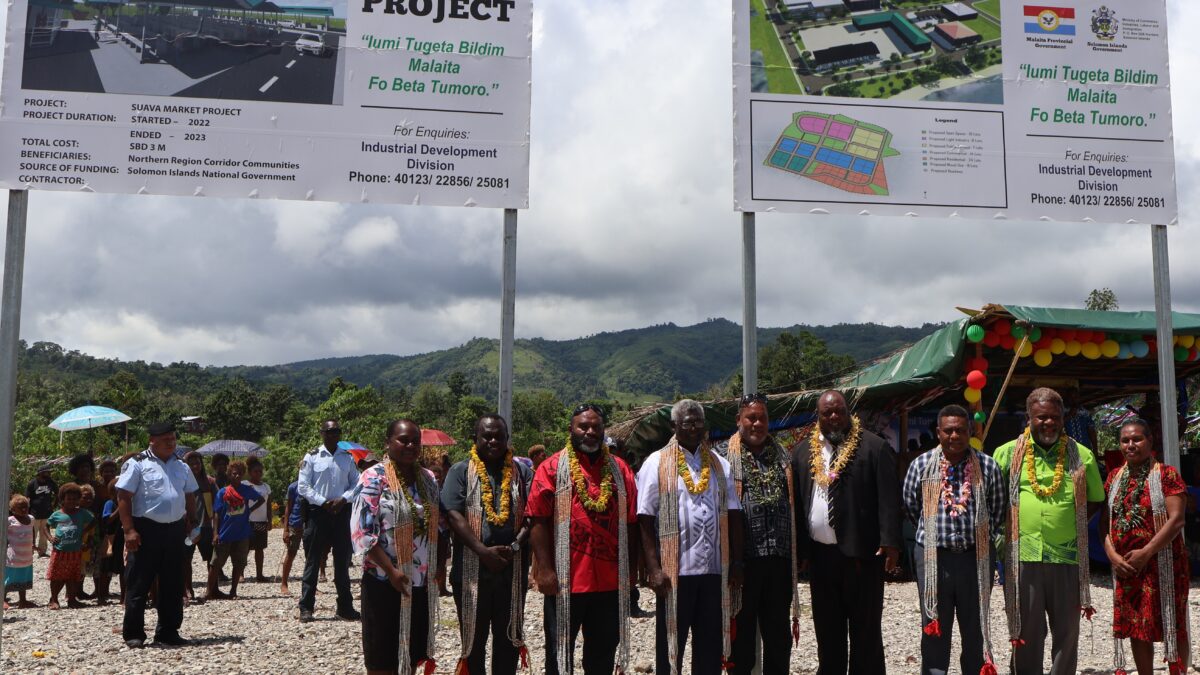 12 years of spell after the Suafa Bay Economic Growth Centre was signed between the National Government, Malaita Provincial Government and the Kwanai Trust Board has ended, with the prioritization of the project by the national government resulting in its groundbreaking ceremony this morning.

To be precise, the Growth Centre’s Memorandum of Understanding was signed on 7th June, 2010 with clear objectives to conduct assessment, survey and valuation on the demarcated area at Kwatonaere for development of the economic growth center.

In today’s historical ceremony, the government’s seriousness to walk-the-talk was clearly manifested in the highest level of attendance.

The Head of the Government, Prime Minister, Hon. Manasseh Sogavare, MP, led a delegation consisting senior government ministers and officials to Suafa Bay and materialized the initial steps that will one day soon see a full-size growth centre at Suafa Bay.

A purchase agreement for the said project was signed on 20th December 2011 where a 5.8 million transaction was done for the 10.6 hectares of coastal land.

In this morning’s ceremony, Prime Minister Sogavare stated, with a population of almost 26 Thousand, a market house will directly benefit rural communities around Suafa Bay.

“The ground breaking ceremony today officiates with an investment of 3 Million dollars to construct a new market which will directly benefit our rural communities with a population of 25, 955 residing along the northern region hinterland and coastal geographical locations,” PM Sogavare explained.

Prime Minister Sogavare expressed, DCGA recognized the Market Building Infrastructure as an important component of the Economic Growth Centre to encourage the growth of economic activities in the Northern Region Corridor.

Once it is complete, the people of North Malaita will have a designated public space including stalls for rural market vendors. Benefits will include clean healthy, hygienic and safe environment.

In the bigger picture, the Economic Growth Centre will be the pull factor especially for employment, trade and investment as well as catalyst for positive spiral of industrial and commercial growth.

This morning’s ground breaking ceremony attests to a new era in history to move forward in partnership and unity between the National Government, Malaita Provincial government and the landowning groups.

This partnership will unlock the development gateway into Malaita’s Northern region corridor.

“Let us from here onwards, stand firm with our strong vision to work together for the better development of current and future generations,” he underlined.

Prime Minister Sogavare assured the people of North Malaita, that through peace, unity, love and kindness, the national government, provincial government and rural people will thrive together to develop Malaita.