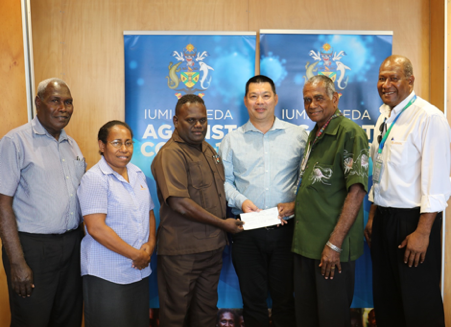 David Quan, Centre, handing over the cheque to PS Makini and SPM Rodgers surrounded by members of Solomon Power board and Acting Chief Executive Officer

In his opening remarks during the brief handover at the Ministry of Finance and Treasury yesterday, Secretary to Prime Minister Dr. Jimmie Rodgers thanked Solomon Power for contributing towards bringing our students from Philippines home safely.

Speaking on behalf of the Oversight Committee Chair, Dr. Jimmie said, the tentative indicative figure of the Philippines repatriation is more than 6.5 million dollars.

He adds that figure is unbudgeted for, which is why the Government appreciates contributions from Solomon Power, Solomon Islands Ports Authority, and the Solomon Forestry Association.

Handing over the cheque of 1- million dollars, board Chairman, David Quan of Solomon Power admitted, his board in its recent meeting was talking about the unfortunate plight of our students in Philippines.

That is why Solomon Power contribute towards this course without hesitation.

“So, in that respect, our contribution is 1-million SBD. It also covers some contingencies in relation to the flight on 27 Oct, said Chairman Quan.

Mr. Quan added, Solomon Power supports the PM’s usual closing statement in his COVID addresses, “We are one people, one nation, one country.”

Meanwhile, the Permanent Secretary of the Ministry of Finance and Treasury, Makini Dentana confirms, his Ministry will facilitate the transfer of payment for the third hotel where our students will be accommodated.

“As soon as the invoice is received, we will transfer the payment to the hotel where our students will be accommodated,” he said.

He adds, from the Central Bank of Solomon Islands, CBSI, the government had made prior arrangements to clear the transfer of pesos from the government account to the hotels.

The Government will be appropriating the 1-Million dollars in its revised budget to be tabled in Parliament to ensure the contributions by Solomon Power, SIPA and SFA are recognised in the budget he explained.

The Solomon Power Ltd’s contribution will help the government meet the accommodation and meal cost of a third hotel for an extended stay of 35 days until the scheduled departure of 27 October 2020, as well as to support more than 60 bus hires to support the transfer of students from their accommodations to the designated hotels and to take the students to the airport during their scheduled departure dates.