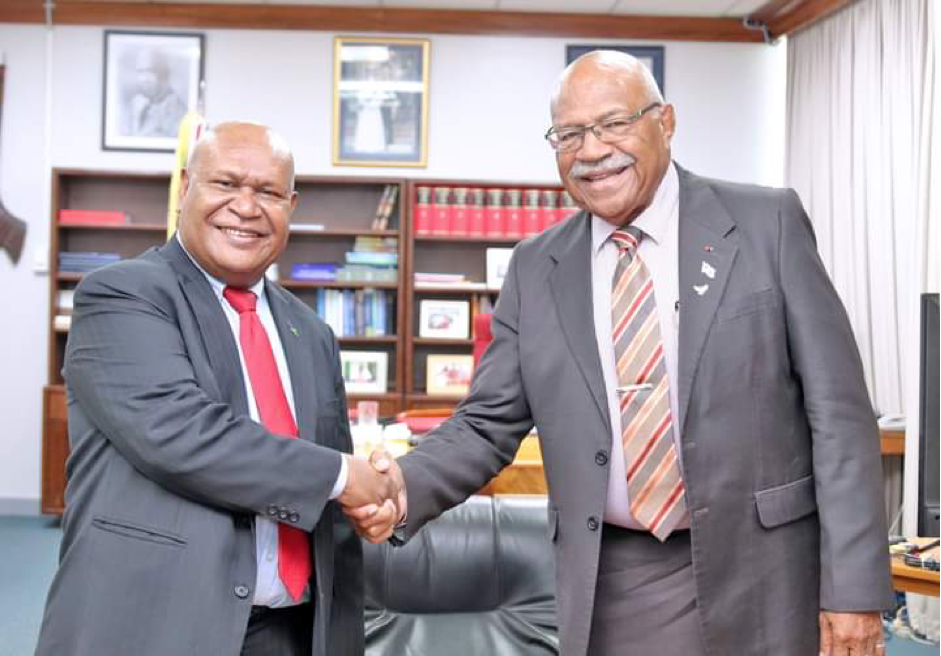 High Commissioner Ma’ahanua took the opportunity to raise areas of cooperation to deepen Solomon Islands and Fiji relations in the sectors of education, health, air services and security.

He reaffirmed Solomon Islands commitment to the construction of its Chancery to further enhance deeper collaborations with Fiji.

He also expressed appreciation and commendation for the presence of the Republic of Fiji Military Force in Solomon Islands who have contributed significantly to building a peaceful and law-abiding community on hotspots in East Honiara.

High Commissioner Ma’ahanua noted that both Fiji and Solomon Islands are members of the Melanesian Spearhead Group and work to advance the two countries interests in the subregional group could serve as a conduit for building a stronger Pacific family.

On the regional front, High Commissioner Ma’ahanua assured Prime Minister Rabuka of Solomon Islands’ support in his role as Chairman of the Pacific Islands Forum and that Solomon Islands stands ready to continue working with Fiji in the global, regional and sub-regional front in advancing areas of common interest such as climate change, oceans and sustainable development, trade, investment and people to people connectivity.  To this end the High Commissioner also commended the position taken by the Government of Fiji to resolve the USP issue.

High Commissioner Ma’ahanua took the opportunity to provide a brief update on the preparations for the upcoming 2023 Pacific Games and said Solomon Islands looks forward to welcoming the Fiji contingent to Honiara in November.

Prime Minister Rabuka in response extended his gratitude to High Commissioner Ma’ahanua for the opportunity to meet and discuss areas of cooperation.  He said Fiji and Solomon Islands enjoy friendly relations as neighbours with a common historical heritage, but more so through the close and deep people to people ties the two countries have.

He assured that in his role as incumbent Chairman in Office of the PIF Summit will work with Solomon Islands and other Pacific countries to address common challenges and the fulfilment of the collective vision of the 2050 Strategy for the Blue Pacific Continent.  He assured that he will work to advance the interests of the Pacific family and to renew regional solidarity and unity.