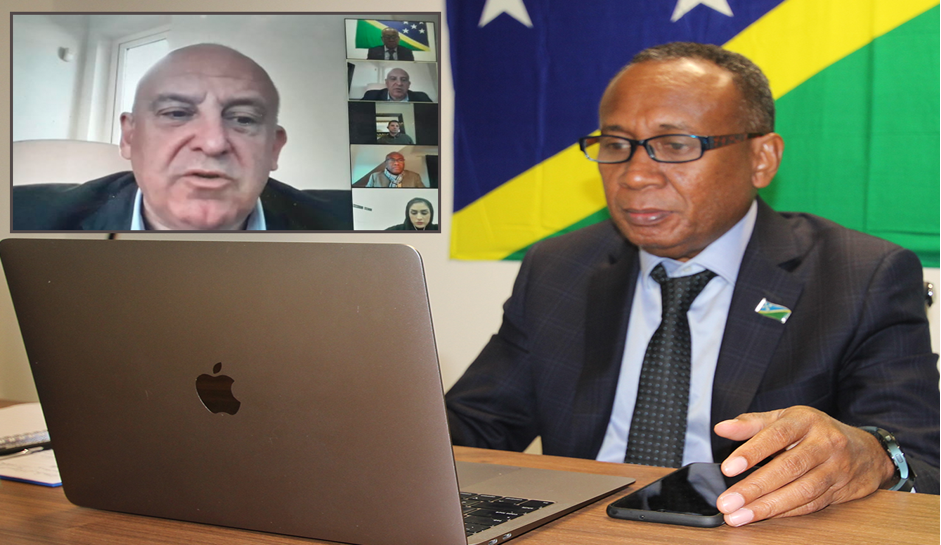 Discussions have commenced further between the Solomon Islands Government and Israeli pharmaceutical company CODE PHARMA on the prospects of introducing an innovative new drug which now appears to have the potential to revolutionise the fight against the Coronavirus.

Code Pharma has scientific evidence and has claimed that in a successful phase 1 clinical trial, the affected patients were back on their feet within 48 hours without side effects.

The zoom meeting held on Thursday 11th November, 2021 was coordinated by Deputy Commissioner General for Dubai Expo, Dennis Marita, and Alaa AlShimmari, Economic Manager of the Israeli Pavilion at the Dubai Expo.

Code Pharma explained that the drug is now in its second phase clinical trial however, a lot of countries have already approved its use in their respective countries due to its effectiveness in curing serious cases of COVID19.

Its trials in Brazil have seen patients with serious cases of COVID19 were back to normal in 2 to 3 days. Codivir is a pill and taken orally. It has no side effects and is effective in patients of all ages.

Code Pharma Chief Scientists explained the data acquired from relevant laboratory tests and clinical trials and will furnish all details to health authorities in Solomon Islands after an MOA is signed between the two parties.

Dr Bainivalu in his response stated that Solomon Islands is still COVID free and the drug may not yet be used until there are COVID19 cases, however, the health authorities in Honiara will be interested to know more about this as an alternative option to vaccines and a standby option should there be cases and community transmission.

Code Pharma Ceo Zyon explained that countries will not lock their borders forever due to economic and social reasons and when borders are reopened the tendency for community transmission is always there and as such this drug may come to play a ‘safety net’ for Solomon Islands and even a double barrier defence against COVID19. This may be the answer to getting our lives back to normalcy.

Alessandro Rosso mentioned that there were some countries who were COVID free but then start to get community transmission once their borders were opened. Grenada in the Caribbean is an example of such but Codivir was able to bring their COVID cases under control.

Commissioner General Mose and DCG Marita echoed the importance of having a life-saving drug against COVID19 in place and on standby in the event of community transmissions and the slow progress of gaining herd immunity through vaccination programmes.

Follow up talks will be held within the coming weeks with relevant parties within the Solomon Islands Health Sector and the COVID19 Oversight Committee for further progress on this matter.