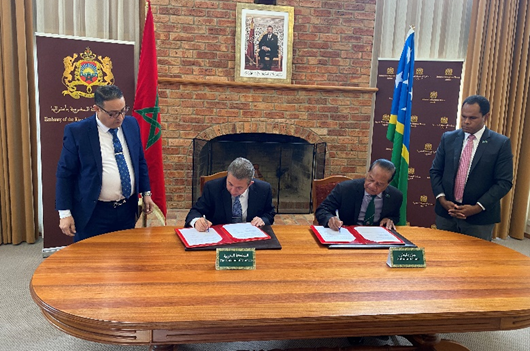 The two MOUs are on diplomatic training and the establishment of a political consultation mechanism and the Agreement was on the Visa Exemption for Holders of Diplomatic and Special Passports.  Both countries have pledged to further strengthen their partnership in diplomacy through training and exchange of internships and have regular consultations on regional and international issues of common interest.

“It’s a historical event today since these are the first MOUs our two countries have entered into since we established diplomatic relations in 2011.  But like any MOU these are ‘expressions of intent’ which we and officials of our two countries will now have to sit down and discuss how best to translate these good intentions into actions so that something concrete is achieved.” Mr. Sisilo told his colleague Ambassador Medrek after signing of the MOUs.

“I could not agree more.  In addition, perhaps we should convene a zoom meeting between our Ministers and officials in 3 weeks’ time to discuss some deliverables that need not wait until COVID-19 is over.  For example, diplomatic training which can be done online.”  Ambassador Medrek suggested.

Mr. Sisilo agreed and would discuss the idea of a zoom meeting with the Ministry of Foreign Affairs and External Trade in Honiara.

The Kingdom of Morocco, in Northern Africa, is a constitutional monarchy (with a King) covering 447,000 square kilometers with a population of about 30 million and Casablanca perhaps its most famous city.  Islam is an important part of everyday ritual life in the Kingdom.