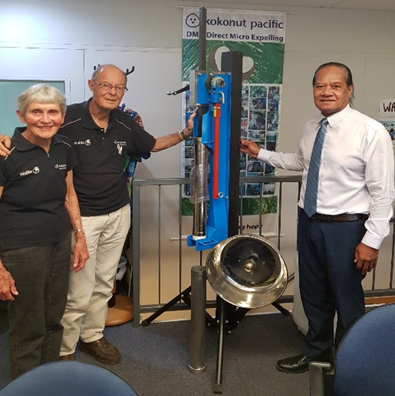 There at the factory Mr. Sisilo and his Deputy, Mr. Walter Diamana, met Dr. Dan Etherington, Founder and Director of PKA, his wife Maureen and son Richard.  Dr. Etherington invented the Direct Macro Expelling (DME) machine, which crushes dry coconuts into very pure, natural, virgin oil within an hour of cutting them open. 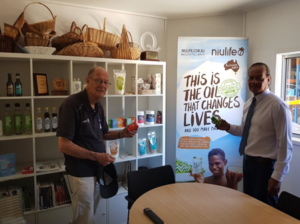 Dr. Etherington showing some of their final products from coconut oil

“The famous virgin coconut oil is a product of this DME which can grate up to 200-1000 dry coconuts a day and freshly squeezed within an hour of opening them.   Alongside virgin coconut oil, there are also other by-products ranging from snacks, animal feed, soaps and cosmetics.” Dr. Etherington explained while showing Mr. Sisilo the DME machine that is transforming the coconut industry and people’s lives in Solomon Islands.

“All this means the people in the rural areas now get 4 times more from what they get from copra.  The money is used for school fees, transport, food and medicine.  In addition, the meal remaining after cold pressing the virgin coconut oil is highly nutritious eaten fresh or used in baking. The balance is fed to livestock providing both income and valuable animal protein.” Dr. Etherington added.

Mr. Sisilo and Dr. Etherington also discussed the sustainability of having the DME on very small islands and very isolated communities.  Both agreed this would require a feasibility study on the extent, to which the supply of dry coconuts can be sustained, as coconut is food for many, and also transportation costs and the level of demand/market etc.  In addition, the destruction the Rhinoceros Beetle has and is causing on coconut trees could end any such ventures if the beetle finds its way to the outermost islands.

“Coconut is our tree of life.  In addition, people want to work and they have plenty of coconut trees.  Unlike mangoes and pineapples, which are seasonal, coconuts, are all-year round.  And thanks to the DME, permanent rural jobs have been created to add value to one of the many products our tree of life is richly blessed with.” Mr. Sisilo said when thanking Dr. Etherington and Kokonut Pacific Australia in joint venture with Kokonut Pacific Solomon Islands for empowering and bringing hope to the lives of rural communities, especially women and youth.

In August 2006, Kokonut Pacific Solomon Islands won the Ryutaro Hashimoto Asia Pacific Forum for Environment and Development (APFED’s) first prize/Gold Award for its project “Rehabilitating a rural economy with virgin coconut oil production.”  It was only 2 years old then and with 13 village-level virgin coconut oil (VCO) units in four Provinces.  Now there are almost 100 such units in almost all the nine provinces.