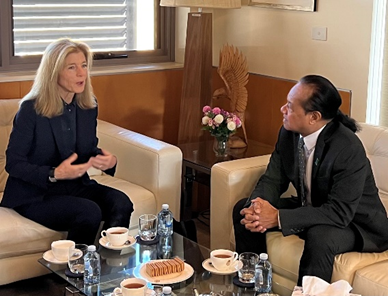 Sisilo and Kennedy during the courtesy visit in Canberra

Within a week of her arrival in Canberra, the new US Ambassador to Australia, Caroline Kennedy, on Monday this week paid one of her first courtesy calls on Mr. Robert Sisilo, Solomon Islands High Commissioner to Australia.

Being new, and at a time of tensions and geo-strategic rivalries between the US, Australia and China on Solomon Islands and the region, she hit the ground running but in a more and keen listening mode.

“Maybe because Solomon Islands is not under her remit (the US Embassy in POM is), she listened more to know more on what the US and Australia are doing in Solomon Islands and the region.” Mr. Sisilo, also a former Solomon Islands Ambassador to the United States said.

The proposal to put a US Embassy in Honiara and the US/Pacific Island Countries Tuna Treaty are some of the notable developments Mr. Sisilo drew to her attention.

There are also the Millennium Challenge Corporation’s (MCC) threshold programme of $20 million to boost economic growth and USAID’s funded SCALE’s $25 million programme to unlock economic opportunities and increase trade in the long term.

On the return of the US Peace Corps Volunteers Mr. Sisilo, a former beneficiary of the programme, was very appreciative and thankful.

“More than 700 Peace Corps volunteers were in the country since the early 1970’s but left in 2000 because of the ethnic unrest.  In fact, one of my teachers at primary school was a Peace Corps volunteer thanks to your late father and former US President, John Fitzgerald Kennedy, who in 1961 established the Peace Corps Volunteers to assist developing countries in education, health, cooperatives etc.  It was his idea, his baby.”  Mr. Sisilo said.

Ms Caroline Kennedy, under the Obama Administration, served as US Ambassador to Japan from 2013 – 2017.  She played a critical role in the commemoration of the 70th anniversary of the end of World War II.

She will be in a high-powered US delegation that will arrive in Honiara over the weekend for the 80th Anniversary Celebrations of the Battle of Guadalcanal.