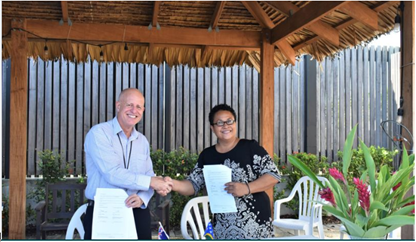 The Solomon Islands Coconut Rhinoceros Beetle (CRB) project, funded by New Zealand Aid Ministry of Foreign Affairs and Trade (MFAT) and delivered by the Ministry of Agriculture and Livestock (MAL) has undergone a variation to extend the life of the project for another year through to June 2023.

The parties to the variation wish to continue working together to respond to the Biosecurity Emergency caused by the Coconut Rhinoceros Beetle. The new strain of CRB, CRB-G is attacking coconut and oil palms in all provinces of the Solomon Islands and is leading to a decrease in production levels of coconut fruits, and in significant infestations, to the death of the palms. This strain is difficult to control, and manual labour is required to keep numbers down while New Zealand MFAT works with other partners (SPC and AgResearch) to find a new virus or fungus that will target and kill the beetle in large numbers.

The New Zealand High Commissioner also mentioned in his speech, that they would continue the support the work through the NZ Aid Programme.  This means that activities that are yet to be started in prioritized provinces can be completed this year through visits from MAL Biosecurity Staff and the Coconut Industry through awareness, sanitation and clean-up demonstrations.

The MAL wishes to ensure that farmers that are experiencing the effects of CRB are aware of the control methods to be used and be able to mobilise to actively combat the CRB by cutting down dead or dying palms, killing any beetles or larvae found, burning the logs and keeping gardens and areas of manure/compost clean.