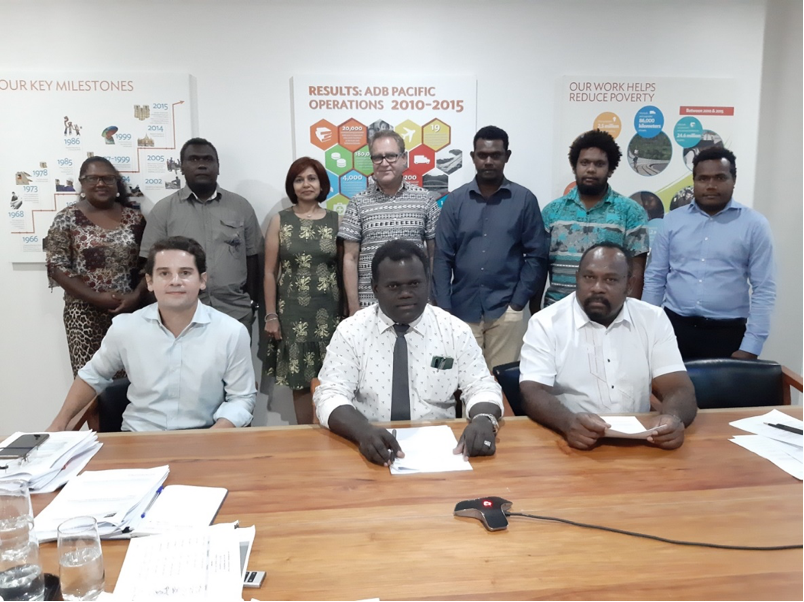 PS Dentana (front centre) with SIG and ADB officials who took part in the negations.

The Solomon Islands Government through the Ministry of Finance and Treasury has concluded the loan and grant negotiation with the Asian Development Bank (ADB) in Honiara on Thursday, 28th January, 2021.

This is for the proposed Land and Maritime Connectivity Project.

As is set out in the Government’s National Transport Plan 2017–2036, the guiding principles for priority investments in the transport sector serves as the policy framework for the project.

The project will support the Government’s initiative to improve connectivity, efficiency, and disaster resilience of transportation network in Solomon Islands.

The proposed investment is US170.71million dollars and the Ministry of Infrastructure Development (MID) will implement the project over 8 years.

The project will rehabilitate and upgrade 35 kilometers of urban and rural roads in Honiara and the surrounding regions of Guadalcanal Province, construct 2 wharves in the rural region, and rehabilitate and improve the old International wharf in Honiara Port.

This project will further enhance the long-term partnership and engagement to support the Government in the transport sector.

At the conclusion of the negotiation, Permanent Secretary of the Ministry of Finance and Treasury, Mr. Mckinnie Dentana highlighted the importance of key infrastructures that are included in the project, especially the Central Market to White River Main Road major rehabilitation work.

Permanent Secretary Dentana conveyed to the Bank the desire of the Government to bring forward this project in 2021 as the country is preparing to host the 2023 South Pacific Games.

The Permanent Secretary also conveyed to ADB that the advance implementation of the project is part of the recovery initiatives of the Government, “as these major projects will help to stimulate domestic business activities and growth.”

The ADB officials assured the Government delegation that bidding process will commence in February, to ensure that work on key infrastructures to commence later this year.

Permanent Secretary Dentana led the Solomon Islands delegation at the negotiation together with Deputy Secretary of the Ministry of Infrastructure Development, Jimmy Nuake and key officials from both Ministries including the support of the Solicitor General.