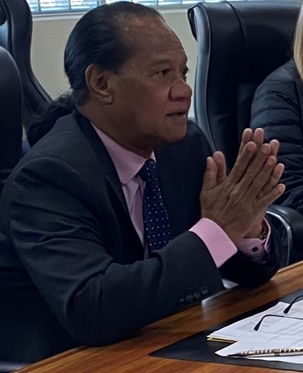 SI WANTS ITS STUDENTS TO PAY LOCAL FEES IN AUSTRALIA

Solomon Islands High Commissioner to Australia, Mr. Robert Sisilo, strongly believes more students from Solomon Islands and other Pacific countries will study in Australia if they pay the same local fees like Australians and others with permanent residency status.

Unfortunately, they don’t and instead pay the same tuition fees like other international students which start at around $25,000 (Australian dollars) per year of study.

“We currently have 40 students in Australia, 14 are funded by Australia and 26 by the Solomon Islands Government.  Many more would be here if only they pay local tuition fees instead of the prohibitively expensive international student fees.” Mr. Sisilo told the Canberra Pacific Roundtable of Pacific Nations in Australia with the ACT Government’s Commissioner for International Engagement and the Department of Foreign Affairs and Trade.

The Roundtable, held on Wednesday this week, focused on the activities Solomon Islands and other Pacific Island Countries are planning post COVID-19 pandemic and how the ACT Government and the business community can assist moving forward.  It identified climate change and its impact as another activity that deserves serious consideration.

“Australia’s commitment over the weekend to a net-zero 2050 target is a very important step forward and I commend the Prime Minister for taking this to the COP26 UN Climate Change Summit in Glasgow next week.  But there are some countries that have come up with more ambitious targets for 2030 and I would urge Australia to also do the same.” Mr. Sisilo said.

These two key areas, education and climate change, are part of the ACT Government’s international engagement strategy to explore and create opportunities for possible partnership with Solomon Islands and other Pacific Island Countries.  The others are tourism, defense, renewable energy, health and sports.

The Commissioner for International Engagement, a co-host of the Roundtable, was established to reach out and engage internationally to fulfill the 2050 Vision for Canberra “to be recognized as one of the world’s great innovations, creative and art cities while remaining the world’s most livable city”.  The first Roundtable was held in 2019 and this was the second.