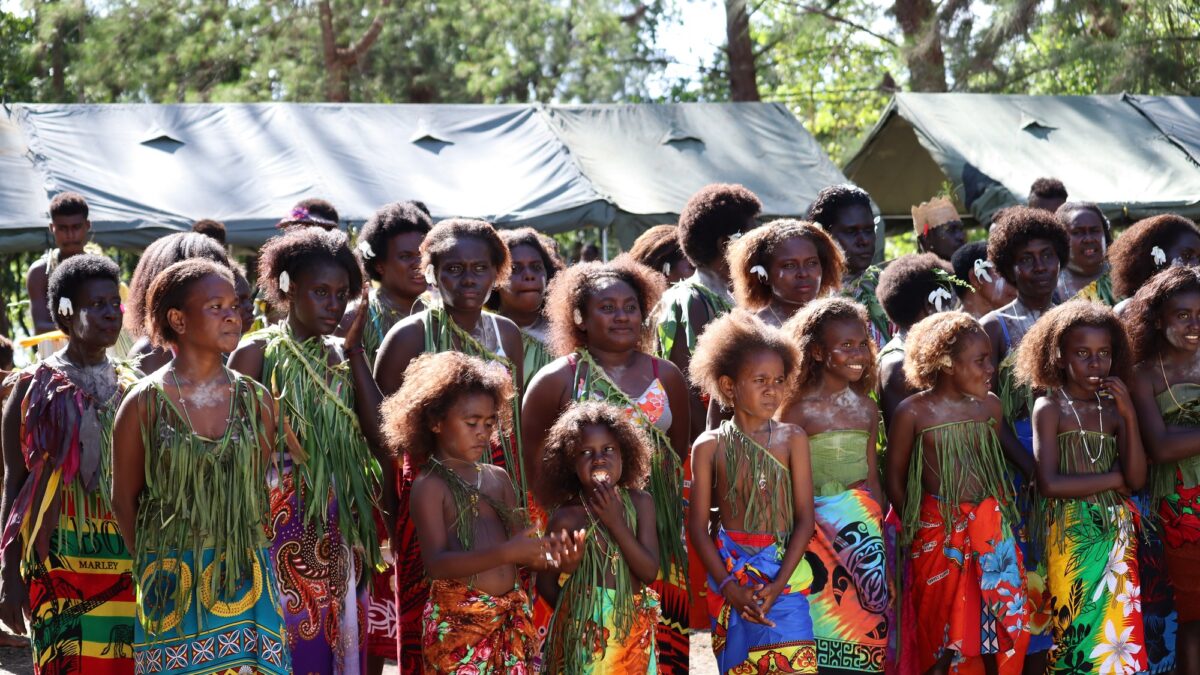 The historic groundbreaking ceremony at Lofung in the Shortland Islands, Western Province Wednesday this week now fulfills the long time wish and desire of people residing along the Western Border region for a robust, structured and established border security management approach.

The ceremony marks the beginning of the construction of the Western Border and Patrol Boat Outpost at Lofung, a historic site on the Island of Alu which was used as a Police Operations Base during the Bougainville Crisis and other policing establishments.

Prime Minister Manasseh Sogavare and Australian High Commissioner to Solomon Islands Dr, Lachlan Strahan travelled to the Shortlands with a high level delegation including Ministers, Members of Parliament, Provincial Premiers and senior Government Officials to officiate the ceremony in the presence of excited Shortland Islands Chiefs and people.

The Australian Government exclusively funded the multi-million dollar Border and Patrol Boat Outpost which was designed to feature environmentally sustainable elements and will be appropriate to regional conditions. It will also include a wharf capable of replenishing Guardian-Class patrol boats, accommodation buildings and storage facilities.

Prime Minister Sogavare described the ceremony as an “exceptional day for both the people of Shortland and Solomon Islands as a whole.

“Today we stand witness to the beginning of a momentous occasion, the ground-breaking ceremony of the Border and Patrol Boat Outpost project on Lofung Island.  I trust that we all appreciate and agree that the security and welfare of communities along the Solomon Island and PNG border is of paramount importance,” he said.

“As such, it is my desire that we continue to strengthen the security and welfare of our people along our borders. This project will go a long way in achieving this, and will ensure that our communities continue to prosper in an environment where we co-exist peacefully with our brothers and sisters across the border,” the Prime Minister added.

The ceremony highlights the start of the DCGA’s response to the long time cry of the people of Shortlands for a strong border security, which was also resonated by people of Choiseul and Malaita Outer Islands.

With the start of the project, Sogavare proudly announced that the Government is now addressing that concern head on.

“We will no longer rely heavily on border police posts. With the establishment of the Border and Patrol Boat Outpost, I am pleased to announce that we are now moving towards a more robust, structured and established border security management approach,” he said.

Prime Minister Manasseh conveyed his appreciation to the Government of Australia for its unwavering support to fund the multi-million dollar project.

“I wish to give thanks to the people and government of the Commonwealth of Australia for their unwavering support-describing Australia as “a friend that has never faltered in their support for Solomon Islands”.

Sogavare described the friendship between Australia as one that is not only built on trust and friendship, but one that is cemented by our friendship and recognition of mutual understanding.

“We are two nations not separated by oceans, but, are joined by the waves of peace, cooperation, prosperity and mutual respect,” he said.

The Prime Minister also conveyed his appreciation to the Member of Parliament for the Shortland Constituency, Honorable Christopher Laore for his political support and desire in moving the project forward.

Sogavare outlined that the project is one that will have lots of benefits to communities along the borders.

The is not only established to provide security, but it is also to ensure people enjoy the economic and cultural benefits that come from living at the border.

“We share a border with a country that we are culturally connected to and we cannot stop these relations purely because of international rules. However, it is equally important that as a sovereign nation, our relationship is monitored and done, in such a way that our safety and wellbeing is being protected and not compromised,” he said.

The border outpost, according to Sogavare is NOT intended to stop the traditional border relations between Bougainville and Solomon Islands.

The Traditional Border Crossing Agreement between SIG and PNG still remains intact and respected. However, the outpost is to ensure that border all residents enjoy the border relation in a safe, regulated and peaceful manner.