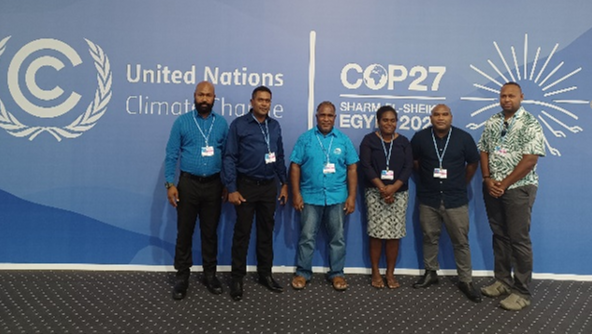 Solomon Islands delegation that attended the COP27 pre-sessions from the 30th October to the 5th November at Sharm El Shiekh International Conference Centre.

SHARM EL SHEIKH COP27 MUST DELIVER ON ITS PROMISES FROM PARIS 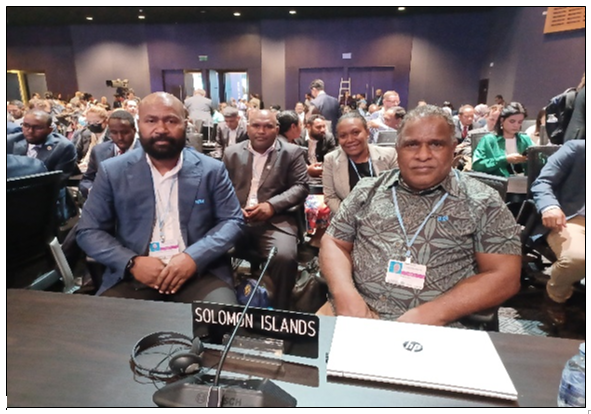 Some members of the Solomon Islands delegation at the Opening Plenary of COP27 at Sharm El Shiekh International Conference Centre.

Prior to the Conference, technical sessions were held from 30th October to 4th November 2022 for developing country parties from negotiation groups such as the Least Developed Countries (LDCs), Small Island Developing States (SIDS) and the Group of 77 and China. The sessions were held to look through the different agendas, seek consensus and support and networking as well as prepare officials for the main conference.

According to Deputy Secretary Technical Mr, Chanel Iroi, some of the key priority issues for Solomon Islands which were thoroughly discussed during the technical sessions last week includes the following:

Other issues which are relevant for Solomon Islands at COP27 are Capacity Building, Agriculture, Gender and Oceans.

On the Sunday 6th of November 2022, the Sharm El-Sheikh Climate Change Conference was opened. Speaking at the opening, Sameh Shoukry, Egyptian Minister of Foreign Affairs and COP27 President said: “We’re gathering this year at a time when global climate action is at a watershed moment. Multilateralism is being challenged by geopolitics, spiraling prices, and growing financial crises, while several countries battered by the pandemic have barely recovered, and severe and depleting climate change-induced disasters are becoming more frequent.

COP27 creates a unique opportunity in 2022 for the world to unite, to make multilateralism work by restoring trust and coming together at the highest levels to increase our ambition and action in fighting climate change. COP27 must be remembered as the ‘Implementation COP’ – the one where we restore the grand bargain that is at the centre of the Paris Agreement.”

Also speaking at the opening of the conference, the new UN Climate Change Executive Secretary, Mr. Simon Stiell, asked governments to focus on three critical areas at COP27. The first is a transformational shift to implementation of the Paris Agreement and putting negotiations into concrete actions.

The second is cementing progress on the critical workstreams of mitigation, adaptation, finance and loss and damage, while stepping up finance notably to tackle the impacts of climate change.

The third is enhancing the delivery of the principles of transparency and accountability throughout the UN Climate Change process.