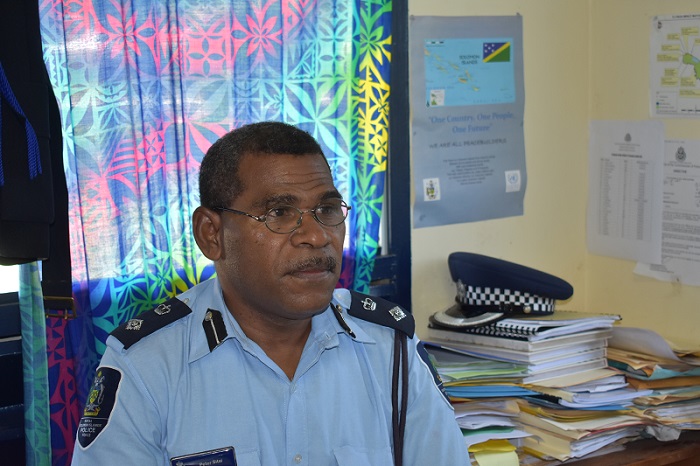 Senior RSIPF officer encourages colleagues to be devoted to their duties

Despite being the most senior police officer in his province, he walks the several kilometres from the cops land near the Ngorangora airport to and from work every day at the Kirakira Police Station in the Makira Ulawa Province.

Provincial Police Commander (PPC) Makira Ulawa Province, Superintendent Peter Sitai, strongly believes that, “The prosperity of a nation depends on people who devote themselves to serve their nation.”

Superintendent Sitai, 49 years old from Pihuru Village in East Makira has his own reasons for joining the police force

“After completing my formal education in the 1980s, I was thinking of securing a job to help with law and order in my own community. My community needed to uncover the causes of crime and how to prevent crime. I wanted to become a police officer to help keep my community and the rest of the Solomon Islands free of crime,” says Superintendent Sitai.

Since his recruitment into the RSIPF in 1990, Superintendent Sitai served in various departments and provinces before being promoted to his current rank of Superintendent.

“Things happen in the life of every individual, families, tribes and the nation for a reason. It’s not a mistake. It’s part of God’s plan for us as individuals and as a nation,” says Sitai as he ponders over the actions of a minority of officers in the RSIPF that disobeys the Force’s Code of Ethics and professionalism.

He continues, “God sometimes wants talk to us and teach us his people about what we are doing which is not right in His eyes. We are just humans and very much bound to make mistakes but do not let your failure overtake your journey in life. Do not be a prisoner of your past mistakes. It might be just a lesson we can learn from and not a life sentence.”

“A police officer must have patience, understanding and respect when dealing with members of the public. We have taken the Oath to serve our country Solomon Islands. This includes good customer service to satisfy what the public expects from the police as a professional police force,” says Superintendent Sitai

He points out, “Being a police officer is not easy what more being a provincial police commander. There are many challenges I have to deal with at work as well as in my own family. But going through challenges makes me learn and become strong in my duty as a sworn police officer.”

“Let us build the trust that our people have put on our shoulders and not allow the distractions of life to sway us from what is in our Oath of office. If we cannot maintain the trust and confidence that the people of this country have in us. Then I think we are in the wrong place,” Superintended Sitai reminds his colleague officers throughout Solomon Islands.

“It’s tough but we need to put God as leader of our life. He will direct us during such difficult times through His Holy Spirit and give us his knowledge and wisdom. He will also give us courage to perform our duties as police officers serving our nation.”

One further advice for his colleague officers, “As police officers we must help each other. Let us share our experiences and knowledge as a way of developing our capability within the RSIPF. Let us share our challenges and find ways of coming out of the valleys of life.”

“A policing service is essential for any government of any country. It deals with law and order. Without law and order, nothing will be possible in terms of development in our country. Police officers play an important role in the development of any country. There are temptations during our daily duties but always put God first and you will stay out of trouble,” Superintendent Sitai tells his colleague officers as he looks forward to another walk from Kirakira Police Station to cops land near Ngorangora airport, the gateway into the banana land.