Officers of the Royal Solomon Islands Police Force (RSIPF) in Honiara today (16 November 2021) farewelled their colleague officer the late Police Inspector Silas Sario Tuaviri during a funeral service at the Holy Cross Cathedral after he passed away on 12 November 2021.

Speaking at the funeral service RSIPF Assistant Commissioner (AC) National Operations Ms Evelyn Thugea says, “I am lost for words, to describe the sadness all of us are experiencing now, let alone a great loss of one of our own in the RSIPF. The RSIPF would like to let the family and relatives know that the organization were deeply saddened by the sudden and untimely passing on of the Late Police Inspector Tuaviri.”

Late Tuaviri had served in the RSIPF and the Solomon Islands Government through Policing for 30 years. He started when he was 22 years old.

At 20, the Late Inspector Tuaviri was employed by the Melanesian Holdings, as the Chief Engineer of the Private Vessel (PV) Kopuria in 1988. He ended his career with the Melanesian Holdings in 1990 and took his oath to serve in the RSIPF on 15 March 1991, making his way up to the ranks from police constable, to police sergeant, police staff sergeant through to police inspector.

On 5 November 1989, Late Tuaviri applied for an engineering post on the RSIPF Patrol Boats. He was unsuccessful however, that did not discourage his inspiration to join the RSIPF Maritime Patrol Boats. On 16 October 1990, he once again applied to be enlisted into the RSIPF, stating “I’d like to join the Police Force, to enforce and keep Law and Order in our country” – Late Inspector Tuaviri was a man of his words. He was accepted on 25 October 1990 and started his career with the RSIPF as a Police recruit.

On 24 January 1991, late Tuaviri was allocated with Force Number 036 and accepted his appointment, as a probationary Police Constable on 31 January 1991.After joining the RSIPF he spend most of his time in the Police Maritime department  the job he loved until he was called to rest.

From 1995 to 1997, he took up supervisory engineering roles and was posted to RSIPV Savo as a young engineer.  As a young energetic man, his commitment and dedication to duties paid off as he received his Police Sergeant promotion from the Police Commissioner on 15 April 1997. In 1998, as an Engineer, he was posted from Engineer, RSIPV Savo to an Engineer position on RSIPV Auki.

In 2000, he was posted to join RSIPV Auki as fourth Engineer and later posted as second in charge Engineer of RSIPV Auki on acting basis the same year. On 1 May 2001, he was promoted to Police Staff Sergeant within the RSIPF Maritime Division, and became the permanent post holder as second Engineer of RSIPV Auki. On 30 July 2010, Late Inspector Tuaviri was one of the RSIPF Maritime officers who was upgraded to Class 4 Engineer.

On 18 July 2017, he was promoted to Police Inspector as Chief Engineer, RSIPV Auki, the position he held up to the Official Decommissioning of RSIPV Auki on 4 March 2021.  His role as Chief Engineer RSIPV Auki did not stop there. He was part of the RSIPV Auki crew who travelled to Australia in March this year for the handing back of the over of RSIPV Auki and taking over of the New Guardian Class Patrol Boat RSIPV Taro.  Unfortunately, late Inspector Tuaviri could not complete the training and could not join the RSIPV Taro crew back home due to illness.

Late Inspector Tuaviri undertook relevant Maritime courses from various institutions both internally and overseas during his career. During his past 30 years with RSIPF Maritime Division and RSIPF Organisation. Serving in the RSIPF for three decades showed the dedication and commitment he had for his job, upholding his statement whilst applying to be enlisted into the RSIPF and high regard and respect he had for his Oath to serve.

AC Thugea says, “The RSIPF values Inspector Tuavari commitment to his job, his passion to his specific work area, as far as persistence to keep studying without letting anything or anyone become a barrier and he will be remembered for what he was to the organization and his colleagues.”

“Serving his people, his organization and his country for 30 years signifies a true and loyal Solomon Islander. He gave his time, efforts and service to this country, protecting lives and properties, and contributing in his own area of work. Creating a peaceful and safer environment for our men, women and children of all ages and race, to move around and enjoy life in a safe environment.”

“The sudden passing away of Late Tuaviri is a huge loss for the Maritime Division and the RSIPF but most especially his children, family, relatives and people of Kulele village in South West Guadalcanal. I salute him for his service.  He will be long remembered by members of the RSIPF. May his soul rest in Eternal and Blessed Peace with the Lord. 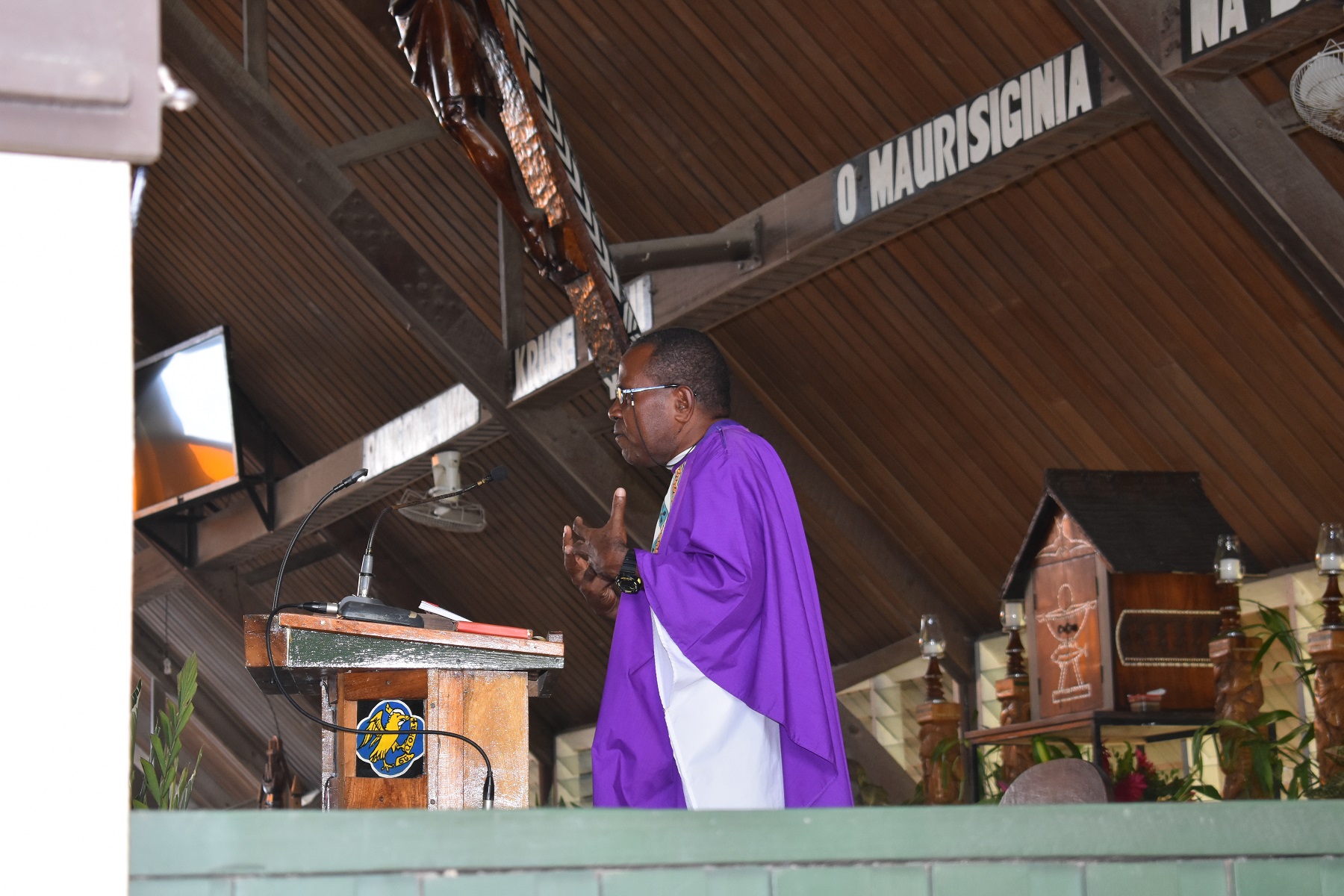 Vicar General of the Archdiocese of Honiara, father John Galvin giving his homily during the funeral service 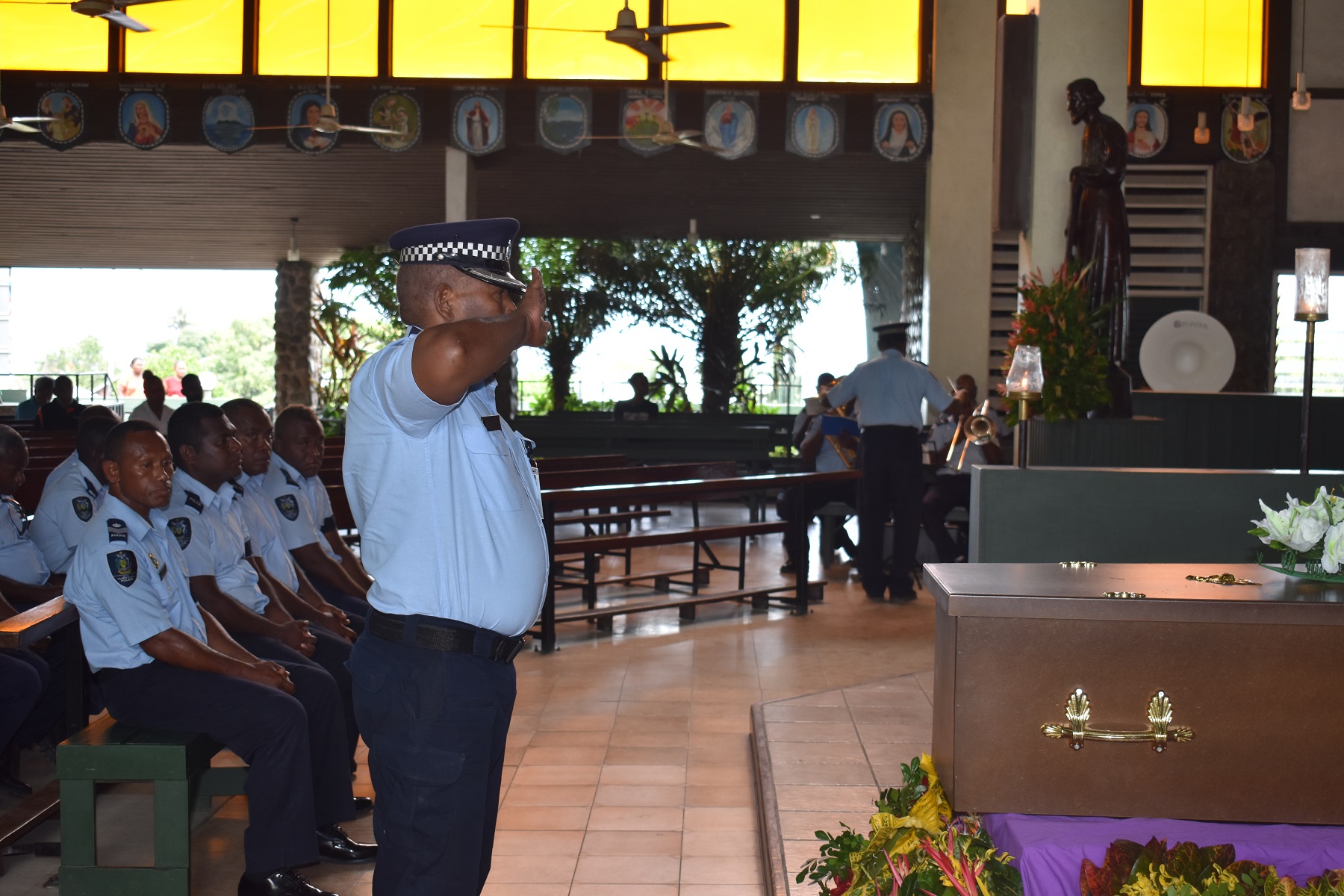 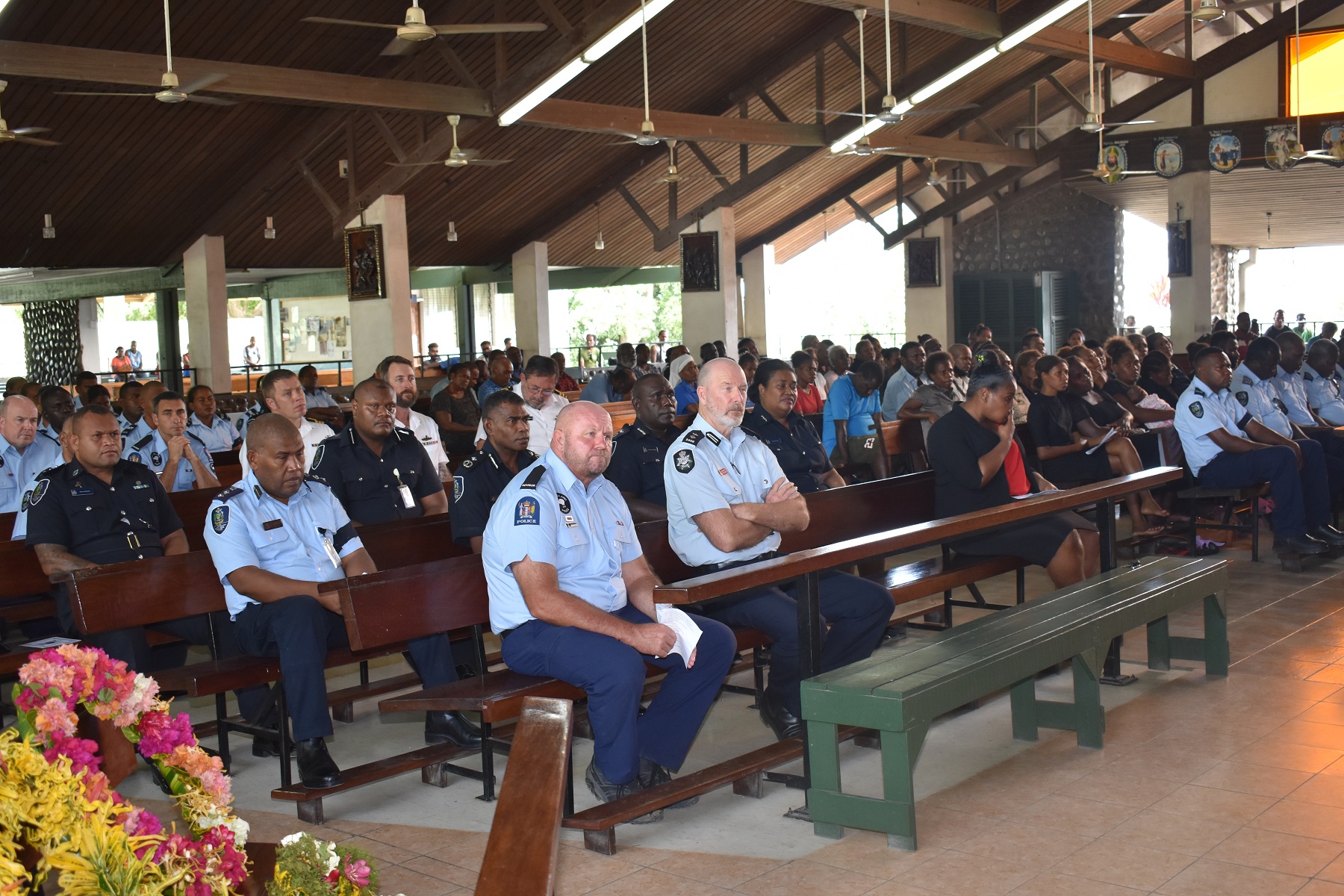 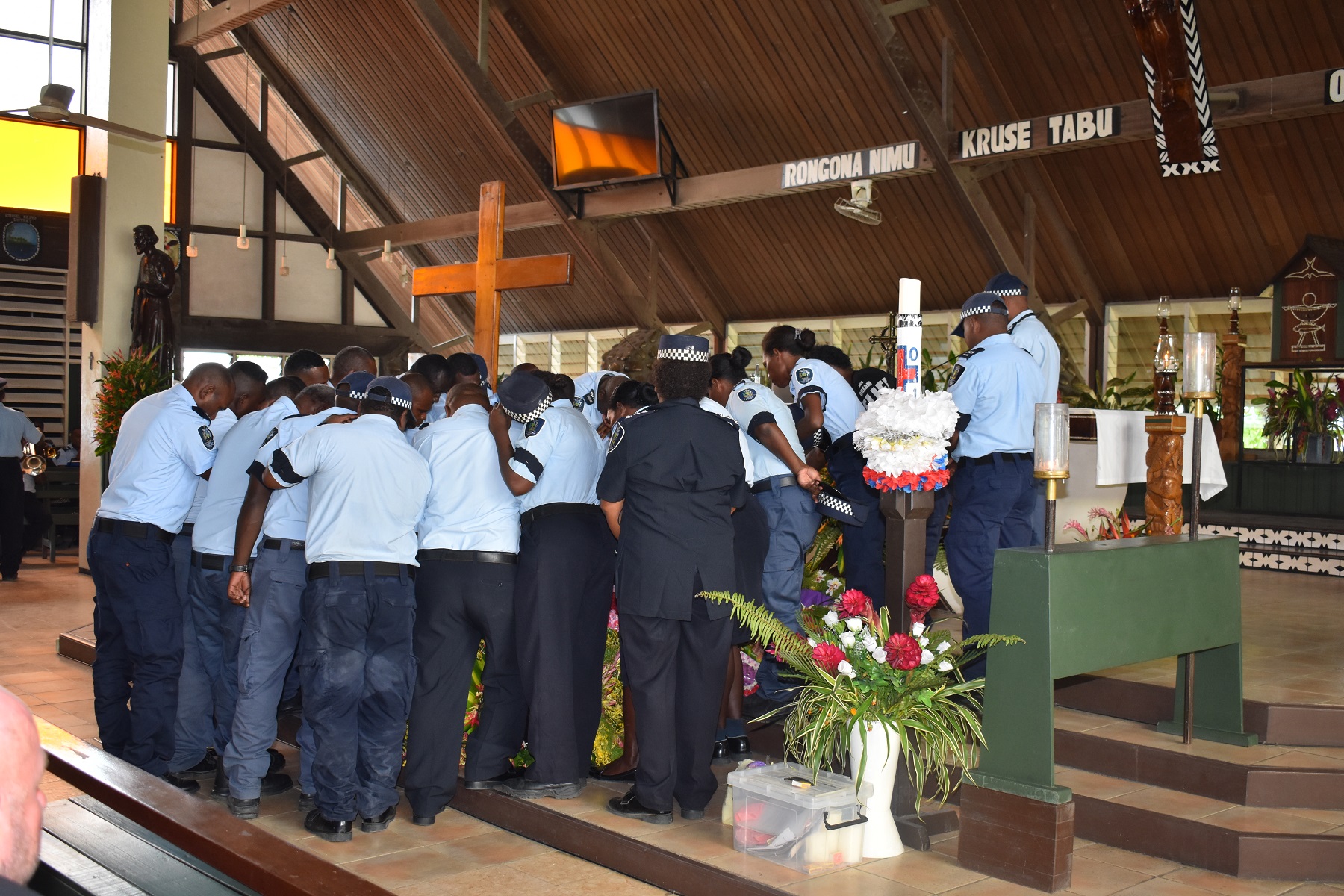 Officers of the RSIPF make their final respect to late Tuaviri 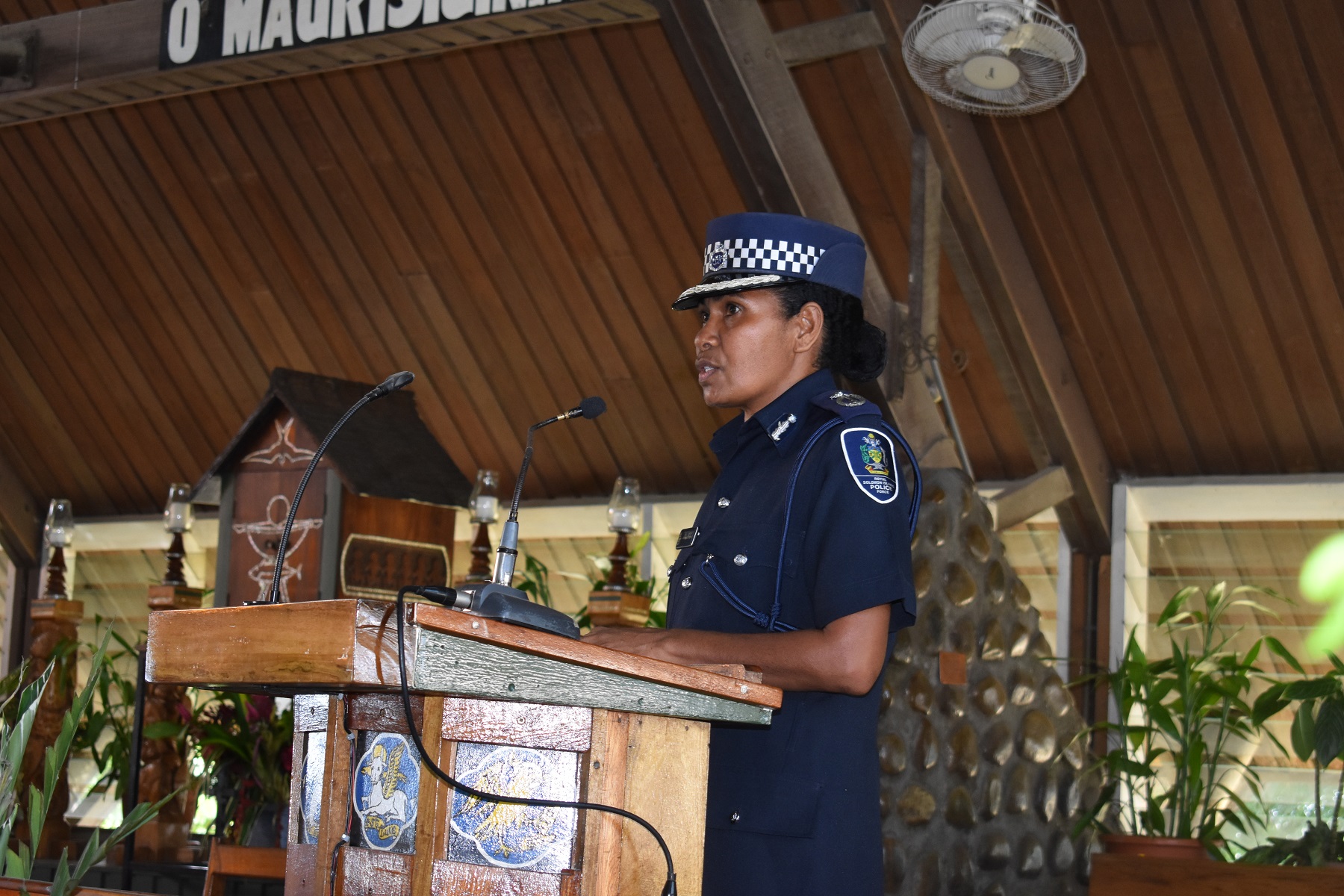 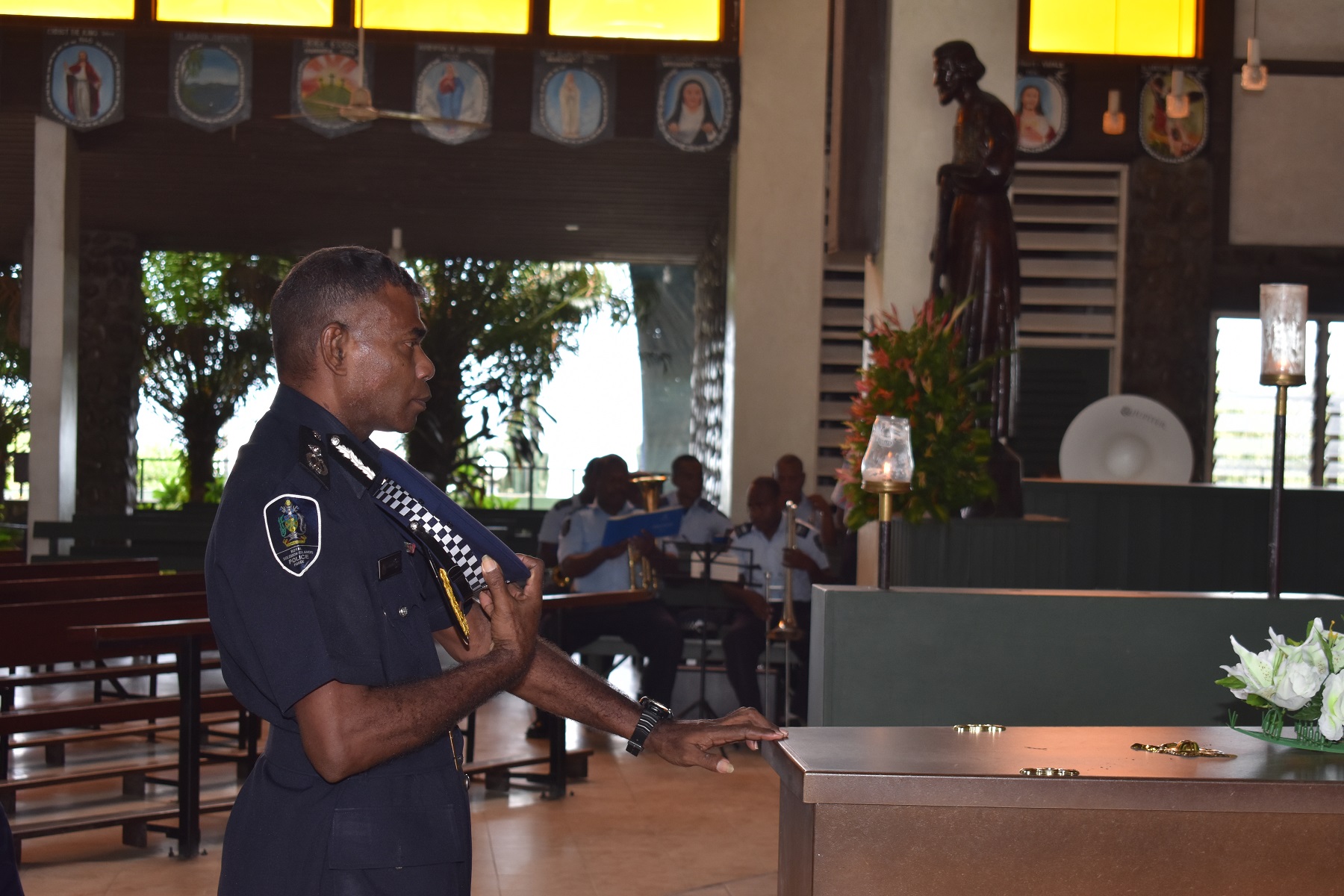 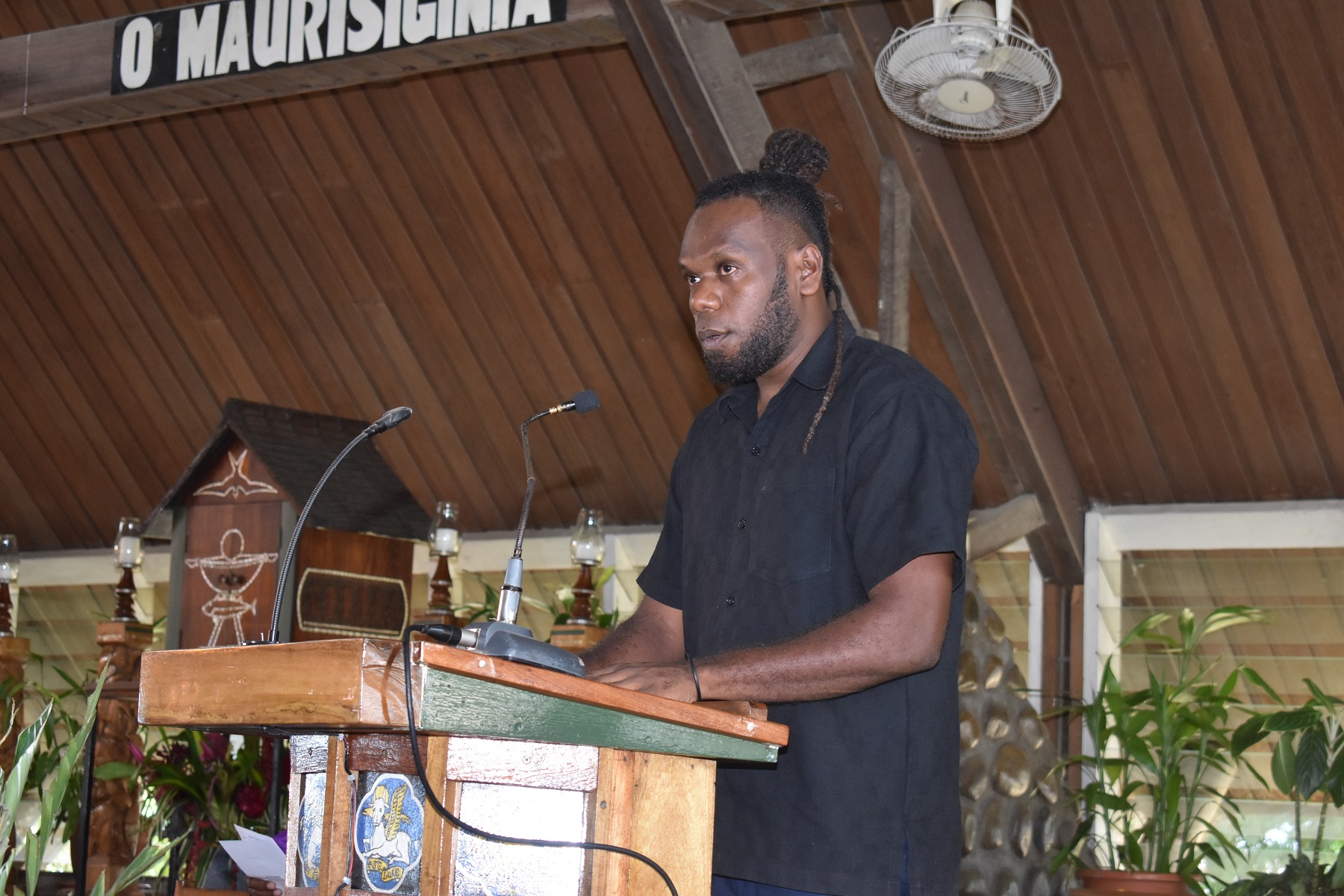