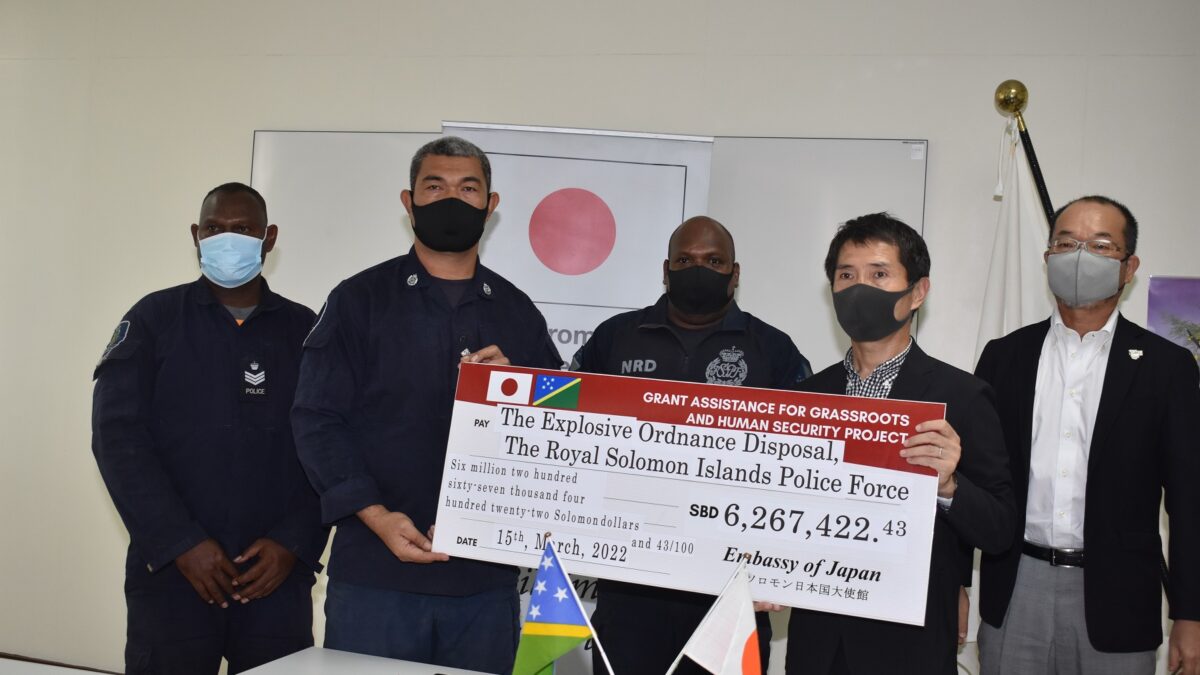 The Explosive Ordnance Disposal (EOD) of the Royal Solomon Island Police Force (RSIPF) receives UXO support funding after a deal signed between the Japanese Government this afternoon (15 March 2022) in Honiara.

Officer In-charge (OIC) of the EOD team, Inspector Clifford Tunuki says, “This support package of more than US seven hundred thousand dollars will boost the capability of the EOD Teams and help them to keep our citizens safe from risk posed by the World War II remnant.”

OIC Tunuki says, “This Unexploded ordnance (UXO) support project in conjunction with the continuous training, advising, mentoring and other support from Australian government will ensure that RSIPF EOD remains capable of dealing with explosive ordnance.”

Inspector Tunuki says, “It will also provide the team with the capacity to increase UXO activities in remote provinces and ultimately assist with supporting the future UXO survey in Solomon Islands.”

Mr Tunuki says, “The UXO support project will also supplement the Solomon Islands whole of government initiative to the UXO problem and will greatly assist with future expansion of the EOD team.”

Speaking during the signing, Japanese Acting Ambassador to Solomon Islands His Excellency Norimasa Yoshida said I am pleased to sign the contract between the government of Japan and EOD of RSIPF.”

Acting Ambassador Mr. Yoshida says, “We will provide equipment such as excavator, vehicles and boats required for the treatment of UXOs. This assistance will enable the EOD team to develop the capacity to deal with residual UXO threats.”

His Excellency Mr Yoshida says, “Japan is fully aware that UXOs are the important and urgent issues to be addressed and tries to solve it with EOD and other partners such as the United States and Australia closely.”

Commissioner of Police Mr Mostyn Mangau says, “I on behalf of Government, people Solomon Islands and RSIPF I wish to take this opportunity to express my sincere appreciation to the Government and People of Japan through the Embassy Office here in Honiara for this generous support and assistance to the RSIPF EOD.”

Commissioner Mangau says, “This huge support will support the EOD team to deal with UXO threats that have been happening for quite a long time. I urged the EOD team to look after those assets well for its intended purpose.”