Officers of the Royal Solomon Island Police Force (RSIPF) Communications Centre (PCC) and the Police Response Team (PRT) will benefit from a Codan Radio Workshop underway at the Rove Police Headquarters in Honiara from 20 – 22 July 2020.

The PCC and Pacific Vaized Company Codan Radio Agent are coordinating the training to increase the radio communication skills of officers with the newly introduced Codan radio equipment. The Australian Defence Force donated the equipment to the RSIPF through the Australian High Commissioner in Honiara.

The training will focus on the basic procedures on the key board, choosing correct channels when communicating with other stations to make sure they have the confidence to send situation reports using the Codan radio 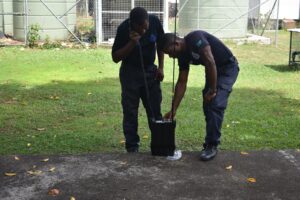 Director of the Police Communication Centre Superintendent Emmanuel Maepurina says, “The PCC would like to see the transition from the other brands being currently used by the RSIPF to the Codan radio which is believed to be more efficient and effective given the long distance [geographical locations] officers have to communicate in Solomon Islands. Codan is used worldwide and recommended for its multifunction operational system which can operate reliably in an all-weather environment.”

“Furthermore the Codan radio security features cannot be tampered with easily and only those trained on the equipment know how to use this equipment,” Superintendent Maepurina explains.

He adds, “Training will also be delivered to all provincial police stations when the Codan radios will have been installed in all provinces. Currently Codan radios have only been installed in six police stations and posts including Taheramo Police Station in Makira Ulawa Province, Malu’u Police Station in Malaita Province, Seghe and Ringi Police Stations in the Western province and at the Kulitanai and Harapa police posts along the border in the Shortland Islands, Western Province.

“PCC department will continue to provide training in all respect with newly introduced Codan radio equipment’s to make sure personnel deployed during any RSIPF operations know their roles and responsibilities accurately when sending situational reports,” says PCC Director Superintendent Maepurina.