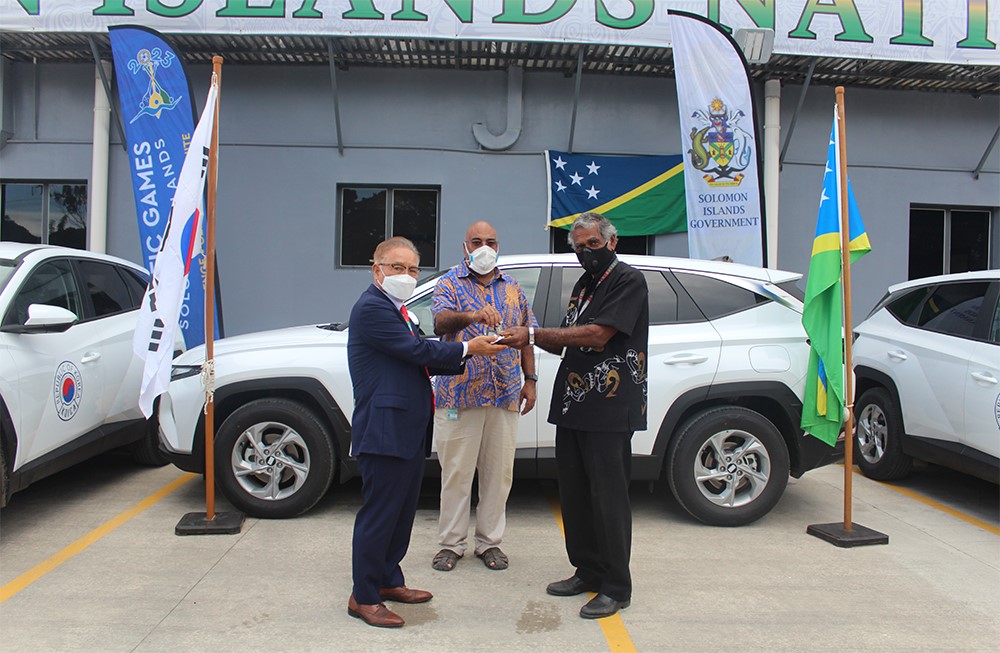 The Government of the Republic of Korea today handed over to the Solomon Islands Government 5 vehicles to support the National Hosting Authority’s logistic in preparation to host the Pacific Games, 2023.

The Hyundai Tucson SUVs are received on behalf of the Government by the National Hosting Authority Chair and Secretary to Prime Minister, Dr Jimmie Rodgers.

The National Hosting Authority Chair, while receiving the vehicles, stated, as part of preparations towards the Pacific Games 2023, the Government has made an outreach to our development partners including the Republic of Korea.

He said, the Republic of Korea is providing an integral component of the Games in terms of logistical support.

“These 5 vehicles initiate the first part of the support from ROK. We anticipate additional vehicles including buses in the lead up to the games,” said the NHA Chair.

The NHA Chair states, the 4th Korea – Pacific Islands Foreign Ministers Meeting, called for deepened cooperation at the bilateral, regional and international level due to the devastating health and socio-economic impacts of the global pandemic.

Handing over the Vehicles, Resident Consular; Mr. Durk Kee Kim (delivering the remarks on behalf of Ambassador of the Republic of Korea, H.E. Ho-jueng Kang) said, the donation from his government aims to supporting Solomon Islands host the 2023 Pacific Games.

“Our two countries have enjoyed over 40 years of amicable relations since the establishment of diplomatic ties in 1978. I hope that this token of friendship will help deepen and strengthen our bond further in the future,” adds consular Kee.

The donation is a timely boost for the National Hosting Authority and the Solomon Islands Government as the country enters the final 21 months of preparation to host the region’s biggest sporting event next year.

The vehicles initiate the starting of NHAs fleet of vehicles to support the PG2023 games.