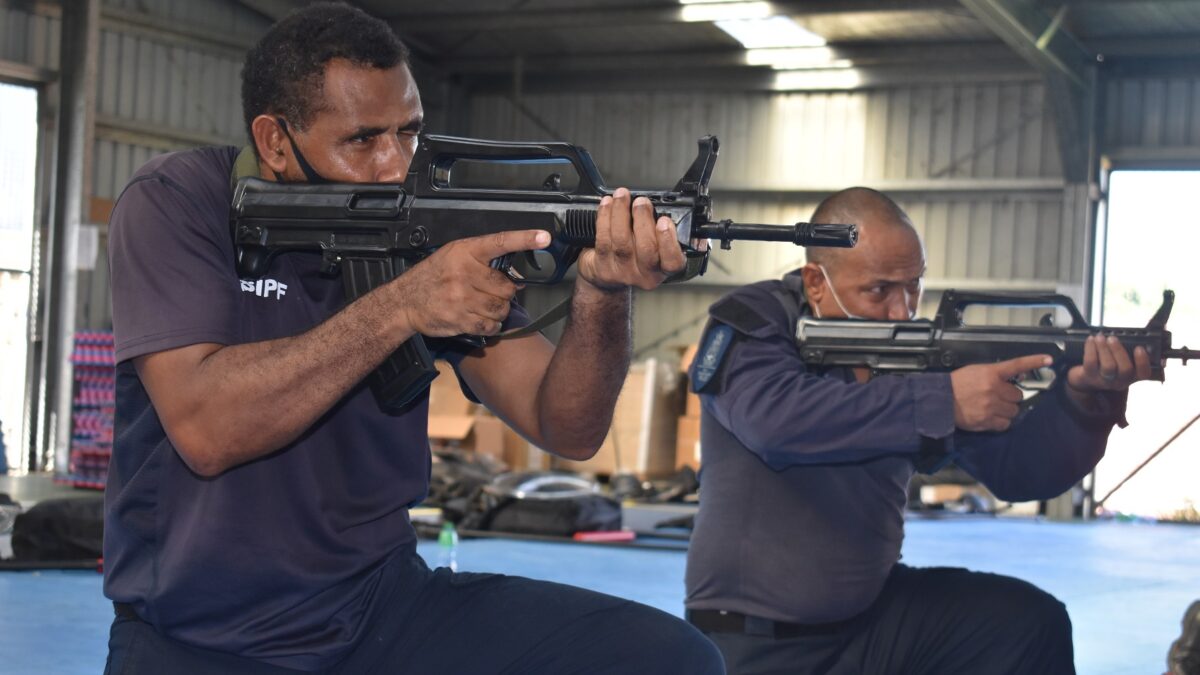 PRT with the replica during training session at Rove 6

Replica riffles donated by PRC to RSIPF purposely for training

The Royal Solomon Islands Police Force (RSIPF) would like to refute an ongoing media publication on recent consignment of alleged gun shipments into the country donated by Peoples Republic of China for RSIPF Training purposes.

Some questions raised on social media asking who imports the replica weapons? Why was it brought under secrecy? Why does it have to come in a log ship? Why was the shipment not handled by Solomon Ports and why the consignment does not have any manifest?

In response to questions, Commissioner of RSIPF Mr. Mostyn Mangau says, “To answer the first question, we must understand that Solomon Island is a sovereign country and when it comes to security we must be sensitive about police capabilities. There is nothing to conceal or hide regarding these replica guns. These things do not in any way threaten the security of this country so far, except they are as good as helping RSIPF in building its tactical knowledge and capabilities.

“It would have been an issue of importance if it was a real weapon. Having said that, I want the public to be aware that, when it comes to real police weapons importation, such undertakings are always kept strictly confidential or secret as it is a matter of security and sensitivity must be put in place at all times until such consignment arrives safely in the country.”

Commissioner Mangau says, “Second question, why does it have to come in a log ship?  “There have been many logging vessels bringing cargoes to Solomon Islands over the past months, which has significantly helped the people of Solomon Islands at this time of COVID pandemic. The question of where the ships are berthing are questions for relevant authorities like Solomon Islands Ports Authority (SIPA) and others to answer, however, there are surface wharfs in Honiara that have been approved from time to time for cargoes to be discharged as long as they meet and adhere to  the International Ship and Port Facility Security Code. (ISPS Code). Logging Vessels are just like any other shipping company that provides services to our country.”

Mr Mangau says, “These two questions, why the shipment was not handled by Solomon Ports and why the consignment does not have any manifest? “These are not questions of relevance as long as these firearms are replicas. There could be an error when data’s were put on the manifest and is not a question that I should respond to. These replicas are not concealed, but stored openly in the container, which are subject to Customs and other inspection and clearance processes. That is actually, what happens in this case. RSIPF and other Law Enforcement Agencies (LEAs) have very good knowledge of the Modus Operandi or methodology of concealments in terms of firearms and dangerous goods such as drugs entering many borders. These replicas firearms when imported into the country do not form any such character of secret concealment of importation.”

“These replica firearms (95 replica rifles and 92 replica pistols) are not capable of firing any live munitions. They are for training purposes and weigh about the same weight of real rifles and pistols. There are 60 pieces of x plastic rifles and 150 pieces of plastic pistol training aides received by RSIPF donated by PRC.”

“People are questioning why RSIPF has not been transparent to inform the public when these fake guns are coming into the country.  RSIPF is the main security agency of this country and so some of the methodology we use or apply does not need the public to be aware of this as a matter of national security. The initial report published in the newspaper by Alfred SASAKO does not say there was a shipment of fake guns coming for RSIPF, but reports on deadly gun shipment. Therefore, the RSIPF went on to investigate what was reported on that paper. The Police investigation and intelligence in their assessment thereafter concluded there is no arms shipment at all but those reports are only referring to the Police training aides donated by PRC. It was at that time that RSIPF was in a position to inform the public that it was only replica rifles and not real weapons and therefore it would only be unfair to say that RSIPF is not transparent.”

“I would like to acknowledge and honour the ongoing support and assistance provided by our bilateral partners in building and enhancing the capacity and capability of the RSIPF in its efforts to tackle and stay ahead of the security threats and challenges in this country.”

“Such commitments by our partners would also help us in contributing strategically to fortify our regional and international commitments such as the UN Peacekeeping Missions. I would very much welcome any other bilateral partners who wish to come forward to modernise the RSIPF to do so, as crime and security challenges are fast evolving over time threatening the lives of our people. It is only through such commitments and cooperation that we can be able to reap the benefits of prevailing over all forms of crimes and security challenges we face today nationally and globally.”

“RSIPF will continue to strengthen the interoperability and collaboration with all Law Enforcement Agencies (LEAs) in the country and with external security agencies to ensure no such dangerous weapons or illicit goods are smuggled or illegally imported into this country. It is only acting in unison by all LEAs that will help us to be strong to protect and keep this nation safe. Solomon Islands is a member of INTERPOL and RSIPF INTERPOL National Central Bureau (Honiara NCB) is working with 195 police forces around the world 24/7 in sharing crime and intelligence information for the purpose of keeping our borders and countries safe.”