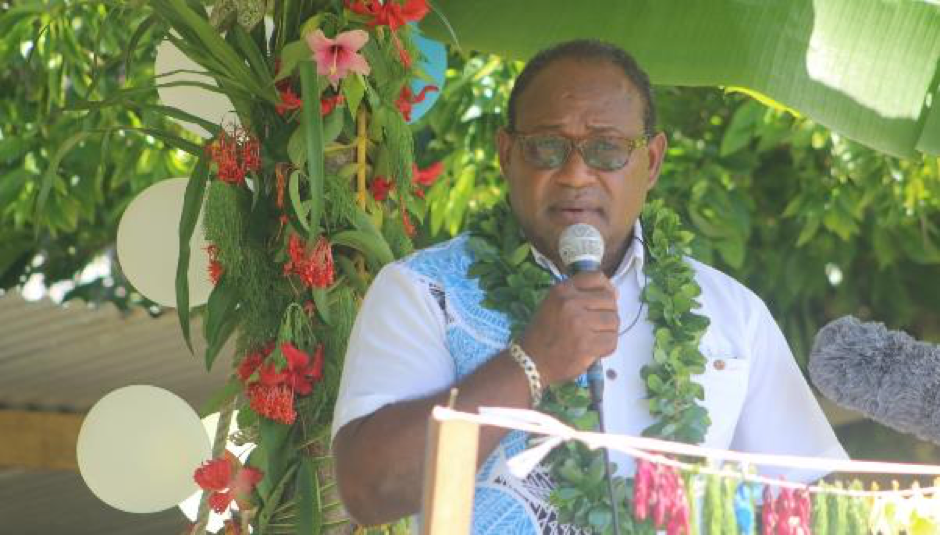 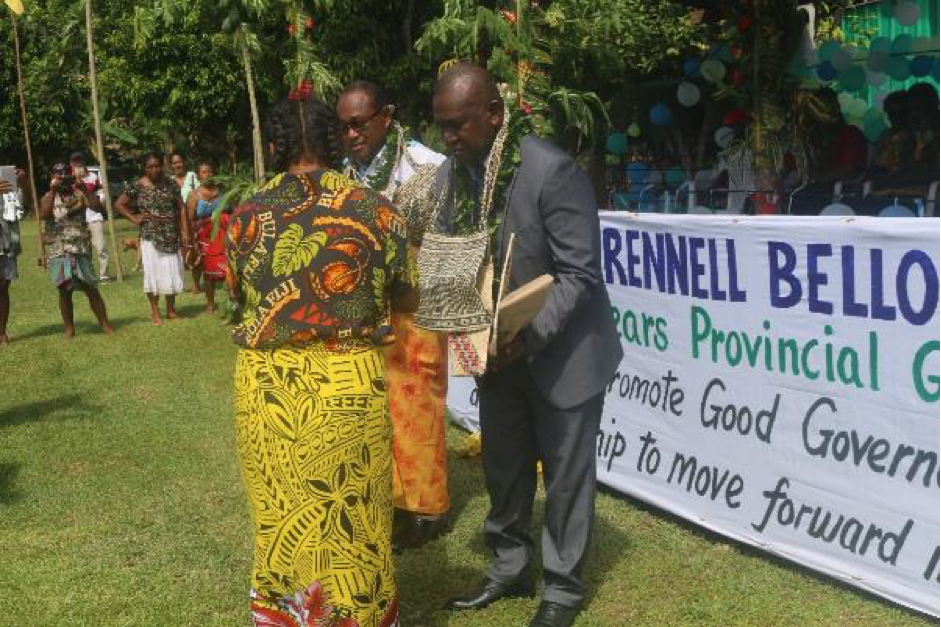 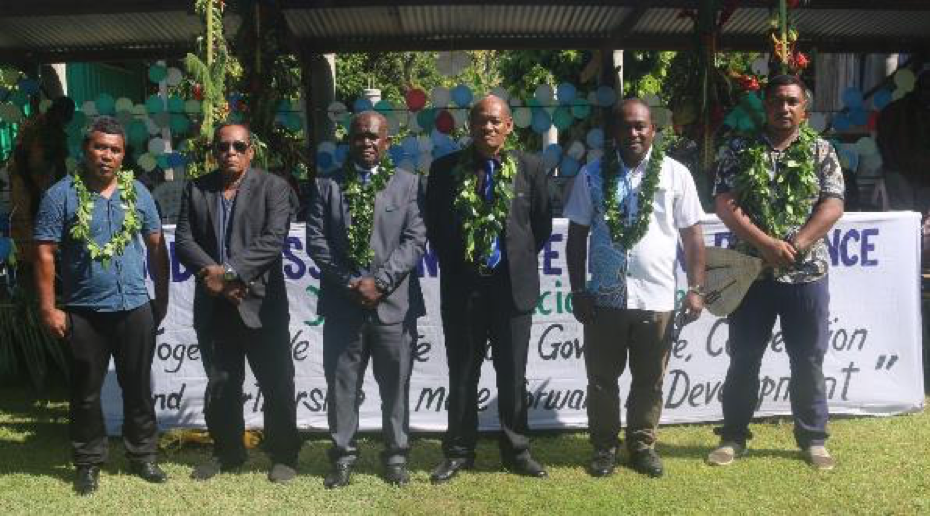 Speaking during Rennell and Bellona Province’s 29th Second Appointed Day Anniversary at Bellona on 20th July 2022, Guest of Honour, Deputy Prime Minister (DPM) and Minister for Ministry of Infrastructure Development (MID), Hon. Manasseh Maelanga stated that despite the challenges such as the COVID-19, the National Government is committing itself to ensuring that the institutions in the Provincial Government System are strengthened. This, he stated is one of the current Government’s policies.

DPM Maelanga informed the Premier for RenBel Province, Hon. Japhet Tuhanuku that the Government will continue to provide the required resources in terms of manpower, finances and frameworks that suits the governance and service delivery aspects of the Province.

“Hon. Premier and my good people of this Province, we may be scattered with our own unique challenges and impounded by the COVID-19 that has disrupted our service delivery schedules, we remain committed to ensuring that your government is well resourced to provide services to our people. We are one people, we are one nation, we are Solomon Islands”, Maelanga stated much to the standing ovations from the hundreds of people who turned up to celebrate the occasion.

Responding to the Premiers speech, the DPM announced that funding has been secured for the Bellona wharf and that work will soon start on its construction. The DPM added that roads on Rennell Island especially the East Rennell road will be also rehabilitated.

He highlighted the Provincial Capacity Development Fund (PCDF) of the Provincial Governance Strengthening Programme (PGSP) as one of the funding sources of the National Government that has helped a lot in terms of infrastructure development in the sectors such as health, education, fisheries, and commercial and social sector in the Provinces.

Maelanga stated that the PCDF for this year 2022 is SBD40M and is pending the PCDF assessment that is currently underway. Once the assessment reports are finalized and its recommendations endorsed by its Joint Oversight Committee, Provinces would be allocated their portions in accordance with their performances in the assessment.

The DPM elatedly stated that due to the transparent and accountable nature of the PGSP, Development Partners such as the World Bank, is going to provide funding support through the PCDF mechanism to the new programme, “Integrated Economic Development and Economic Resilience”, to the tune of USD23M for the next five years to support climate change and disaster risk resilient PCDF projects, and development and strengthening of Ward Development Committees (WDCs) in the Provinces.

He however, lamented that Provincial Government Services cannot be delivered to the full extent unless there is a vibrant and effective workforce. He assured the Premier that the MPGIS will continue to support the Province build the capacity of its Provincial Staff to utilize the expertise on the ground and maximize the capacity development opportunities in service delivery.

He further assured the Premier that the National Government through the MPGIS in collaboration with Rennell and Bellona Provincial Government will continue to roll out the Community Governance and Grievances Management Programme (CGGMP) for the rest of the year up to 2023.

On the review of the Provincial Government Act 1997, DPM Maelanga stated that he believed that what the Provinces want is more resources and the ability for them to govern and make policies and strategic decisions pertaining to their own affairs. He assured that the review that is still underway is being carried out in conformity with the proposed federal constitution and will capture the aspirations of local government and the communities.

On electoral reforms, the DPM stated that consultations on the synchronization of National and Provincial Elections in the Provinces including RenBel are being carried out by a task force, in conjunction with the reviews of the Electoral Act 2018, Honiara City Act 2020, and PGA 1997. The reviews are necessary for the achievement of manageable, cost effective and accountable elections.

The DPM clarified that the electoral reform should not be confused with the plans to defer or delay the upcoming elections because of the SP Games and the fact that voters-registration is yet to be carried out. He stressed that the mandate to endorse the proposal does not rest with the Political Government of the day, rather it is the National Parliament that has the power to approve or reject the proposal.

The DPM congratulated the Premier, the Executive, the Assembly, Chiefs, Churches, NGOs, and people of RenBel Province for the realization of their 29th Second Appointed Day Anniversary. He calls on everyone in the Province to work together for the common good, regarding delivery of services in the Province. Amongst the Guests were the DPM, Hon. Manasseh Maelanga, Minister for MPGIS Hon. Rollen Seleso, PS for MRD, Dr. Samson Viulu, PS for MID Mr. Steven Maesiola, Officials from MID and MPGIS, OPMC, SIBC and RenBel Provincial Staff.

Speaking earlier, Premier for RenBel Province, Hon. Japhet Tuhanuku, stated that his government believes that the private sector growth is the key to long term sustainable development in the Province. He lamented that the private sector in the Province is challenged by lack of basic infrastructures and minimal enabling environment that can provide a springboard for taking off with regards to basic service delivery.

Premier Tuhanuku highlighted some of the challenges that his Provincial Government is facing. This includes very narrow economy base that he says affected internal revenue base of the Province, making it fully dependent on the National Grants. He also lamented the application of national forestry and mining and minerals laws in the Province which he cited as unbeneficial to traditional landowners.

He cited West Rennell land acquisition as another process that was unfair and causing problems to the people of West Renell. Another problem that the Premier further iterated the as unfair was the exclusion of the RenBel Provincial Government and the coastal and reef owners from the initial discussions and negations on compensation claim for the oil spill at Lavangu.

Premier Tuhanuku expressed that while there is a demand for self-autonomy by the Provinces in the Buala Communique, he believes that close consultations by National and Provincial leaders on matters of national interest is the only way to avoid radical reactions as every Province is better off together as one Solomon Islands.

On the wishes of his government for direct intervention by the National Government, he stated that the occasion of the 29th Anniversary Celebration presented itself as a perfect timing stating them. “Hon. Deputy Prime Minister, the infrastructure requirement that we urgently need to enhance our private growth and service delivery include; wharves, industrial centres, upgrading of existing airstrips to accommodate bigger planes, airstrip for East Rennell, upgrading of existing roads, establishment of townships in the two islands, and upgrading of communication infrastructures.

The Premier acknowledged and paid tribute to past leaders of the Rennell Bellona Province for their great contributions to shaping the Province and making it become one of the sister Provinces of the Solomon Islands today.

The theme for the Rennell and Bellona 29th Second Appointed Day Anniversary Celebration was “Together We Promote Good Governance, Cooperation, and Partnership to Move Forward in Development”.

The occasion once again was one of the annual memorable celebrations of the Province.