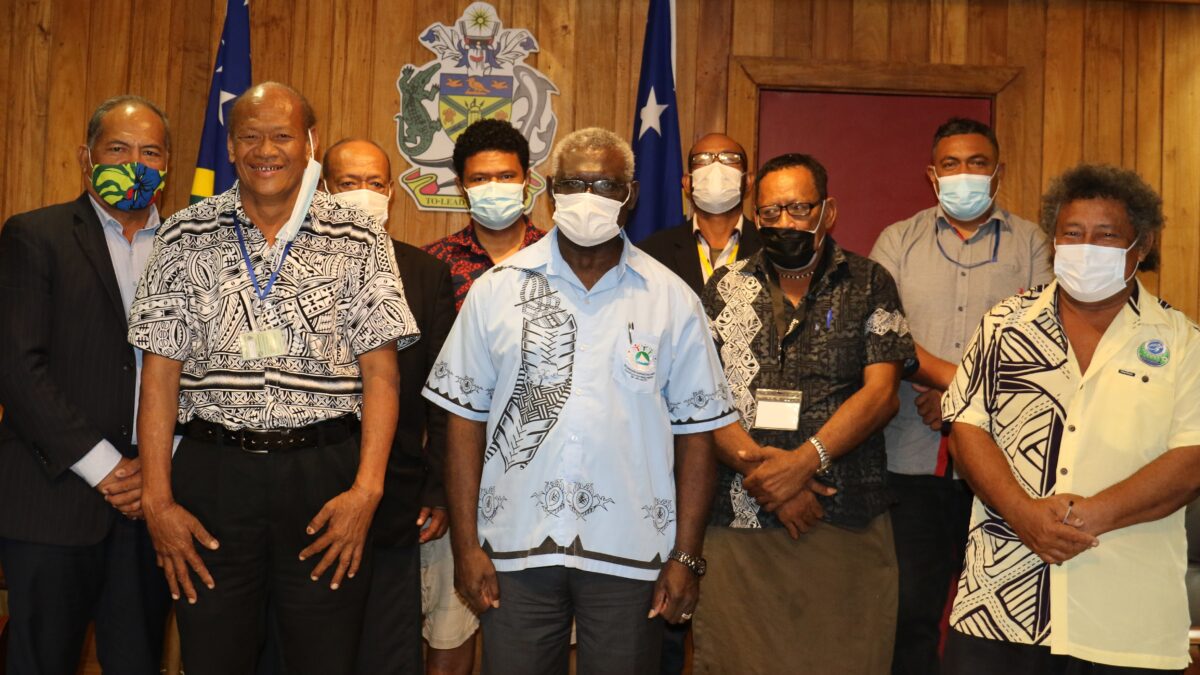 PM (centre), Premier Tuhanuku and members of the Rennell and Bellona Provincial executive and officials.

PREMIER Tuhanuku: “PM, Your leadership under these challenging times is highly commended.”

Premier Tuhanuku personally commended Prime Minister Sogavare when he and members of his 3 months old executive met the Prime Minister in his office.

“Prime Minister, my Executive acknowledge your leadership in guiding our country in very difficult and challenging times and the achievements of your Government in all sectors and sections of our Country,” Premier Tuhanuku stated.

Premier Tuhanuku and his executive thank and congratulate Prime Minister’s hard work and abled leadership especially in preparing and effectively responding to the COVID-19 Community spread.

The wisdom and hard work put into addressing COVID 19 has seen a relatively quick return to some form of normalcy, allowing the continuation of service delivery by the National and Provincial Governments to our people adding, the Private sector has resumed business activities.

“Your leadership in this regard is highly commendable.”

On the political front, Premier Tuhanuku reaffirms his executive’s position as an agent of the Sogavare led government.

“The Province is operating under the umbrella of the National Government.”

He said, since taking over the helm of provincial government leadership on the 8th February 2022, his executive is doing its best to chart a way forward for the province by defining the Province’s policy statement under the framework of the Solomon Islands National Development Strategy 2016-2035 and the DCGA Policy Statement.

“In line with the vision of the National Development Strategy and DGCA policy statement our vision for our Province is to work towards improving the economic and social livelihood of all people of Rennell and Bellona to attain a meaningful quality Life.”

Mr. Tuhanuku further stated, the ability of the Province to meaningfully contribute to improving delivery of basic services to its people and help with the development of a strong and vibrant Private sector is constrained by factors mostly outside its mandate and resources as a Province.

He said, the government is pursing infrastructure development for the province.

“Rennell and Bellona province is a tourism hub. All it needs is infrastructure development. It can be revolutionized,” he stated.

Prime Minister Sogavare appreciates the provincial executive for aligning its policy and strategy with that of the national government.