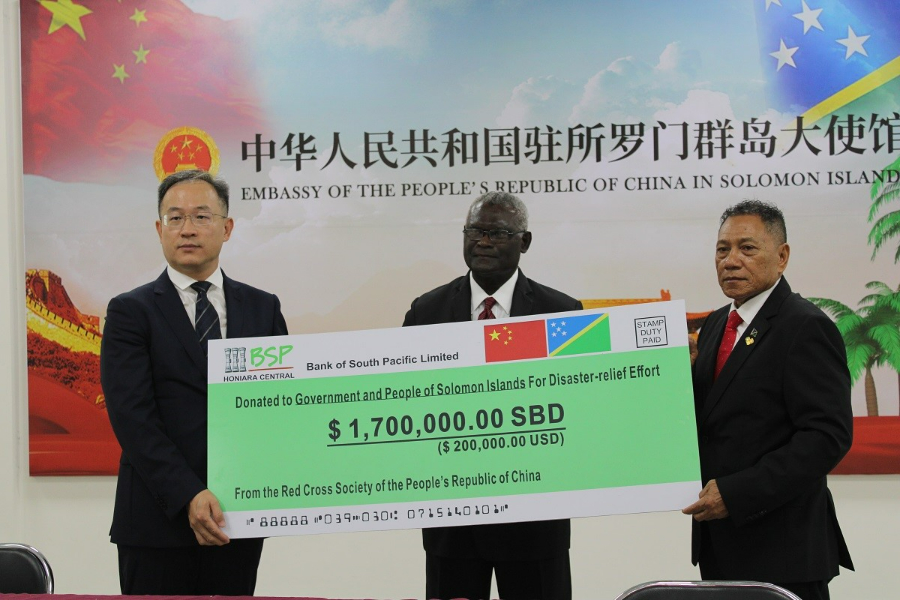 PRC Ambassador to the Solomon Islands, His Excellency, Mr. Li Ming presents a donation of $1.7m to the Supervising Minister of Foreign Affairs and External Trade, Hon. Peter Shanel Agovaka for disaster relief efforts in the country following the recent earthquake. Witnessing the occasion is the Prime Minister, Hon. Manasseh Sogavare.

The People’s Republic of China has donated $1.7m (SBD) to the government of the Solomon Islands to assist in disaster relief efforts following the recent 7.3 earthquake on Guadalcanal.

The donation was received during a ceremony organized on Sunday (4/12/2022).

Supervising Minister of Foreign Affairs and External Trade, Hon. Peter Shanel Agovaka received and acknowledged the relief support from the PRC Ambassador to the Solomon Islands, His Excellency, Li Ming in the presence of Prime Minister, Hon. Manasseh Sogavare.

The donation was presented to the Solomon Islands from the Red Cross Society of the People’s Republic of China.

In its recent situation report, the National Emergency Operations Centre (NEOC) has reported damages to school infrastructures such as classrooms and staff houses sustained major damage on Guadalcanal.

A quick survey by the CBSI sets the total cost of building damages in Honiara caused by the 7.3 magnitude earthquake at $1.85million.