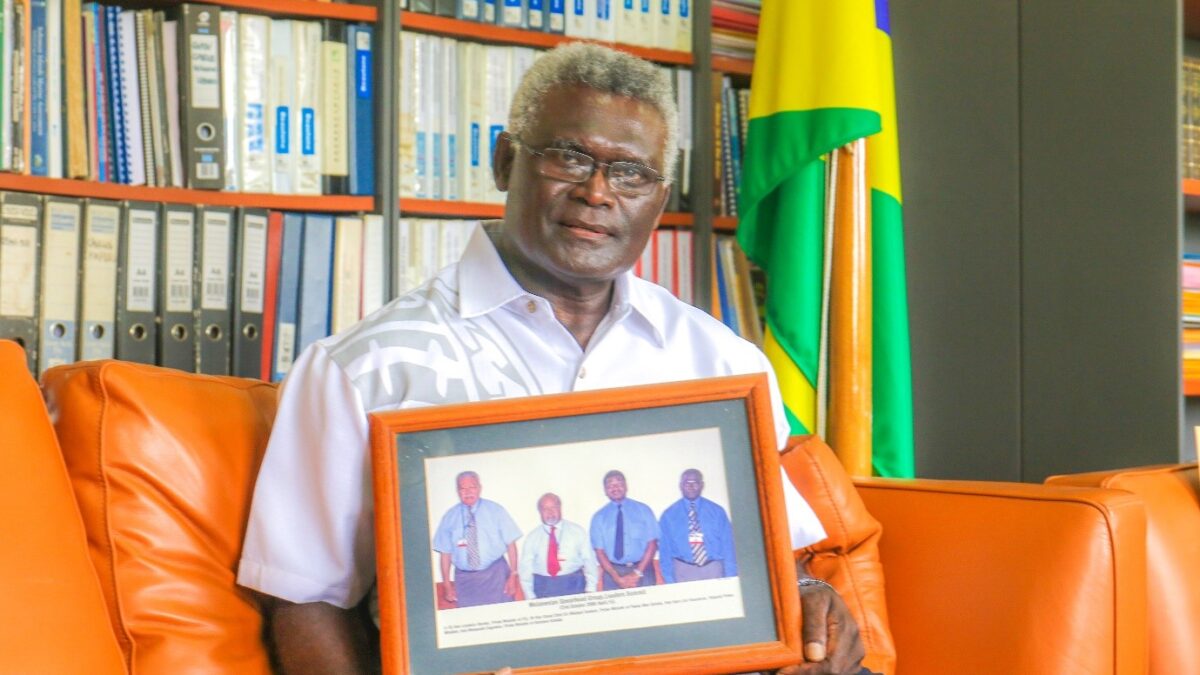 PM Sogavare holds a portrait from the MSG Leaders Summit in Suva in 2006. Pictured in the portrait is former Prime Minister of Fiji, Laisenia Qarase, the late Grand Chief Michael Somare, the then Prime Minister of Vanuatu Ham Lini and Hon. Manasseh Sogavare.

Speaking from his home shortly after his arrival from his tour to his home province last Friday, the Prime Minister stated,

Hon. Sogavare further stated, “The late Sir Michael Somare was a political pioneer and a pillar of strength not only for Papua New Guinea, but for Melanesia and the wider Pacific region.”

Hon. Sogavare also acknowledged the late Grand Chief Sir Somare has left behind a legacy that will be difficult to be matched by current and future generations of political leaders in our region.

Prime Minister Sogavare also wrote to his Papua New Guinea counterpart Hon. James Marape referring to late Sir Somare as “a true son of Melanesia and a respected elder of the Pacific region this morning.”

Hon. Sogavare further stated, “Solomon Islands acknowledge his service and contribution to the government and people of Papua New Guinea.  The late Sir Somare has lived a full and productive life.”

Hon. Sogavare expressed that late Somare’s leadership in reaching out and strengthening bilateral relationship between Solomon Islands and Papua New Guinea “deeply appreciated and applauded by the government and people of Solomon Islands.”

Prime Minister Sogavare acknowledged that the late Sir Michael Somare’s leadership within the region and sub-region of Melanesia will be long remembered.

“As Melanesians we bow our heads in respect to the memory and legacy of one of our leaders and architect of the Melanesian Spearhead Group and Solomon Islands stand in solidarity with your government and people during this difficult period,” Hon. Sogavare wrote.

“We pray for God’s comfort and grace to be with you, your government, your people of Papua New Guinea, including the immediate family of the late Grand Chief Sir. Michael Thomas Somare, in particular Lady Veronica Somare during this time of bereavement.”

In his personal life, Prime Minister Sogavare has a close connection with the late Somare through his family.