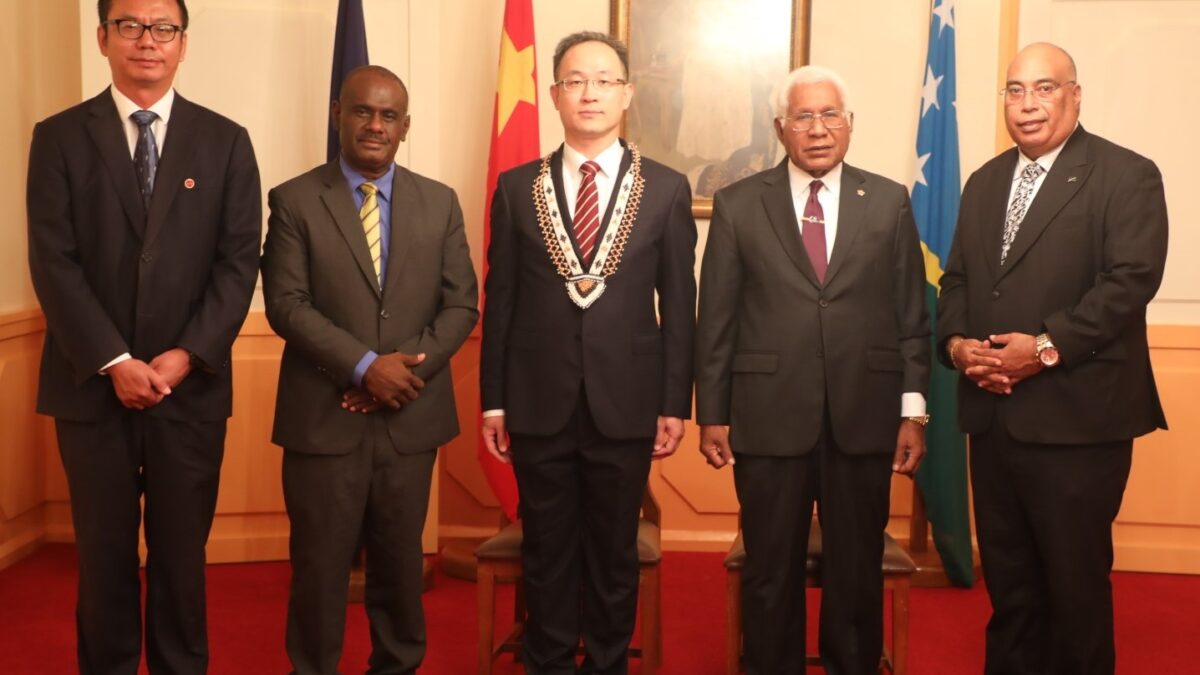 Prime Minister Manasseh Sogavare has officially welcomed the People’s Republic of China’s (PRC) Ambassador to Solomon Islands, His Excellency Mr. Li Ming as he began his posting in Honiara today this week.

Mr Sogavare in receiving Ambassador Li described the newly established relationship with the Peoples Republic of China as a “blessing to Solomon Islands and it people”.

Prime Minister Sogavare said the Solomon Islands relationship with the People’s Republic of China is a demonstration of true and stronger partnership.

“It has been an interesting short journey, a couple of days away from our first anniversary,” said the Prime Minister.

“PRC will work closely with the Government and leadership to make our relationship grow stronger,”

He adds, the storm has been weathered. “We know how to steer the boat. It will only make this relationship stronger”.

The Prime Minister thanked Ambassador Mr. Li on behalf of the PRC Government, for devoting to the Pacific Games 2023.

“I take this opportunity on behalf of the people of Solomon Islands to thank PRC for its funding assistance towards the 2023 Pacific games. The Pacific Games was something we wanted to host for a very long time. This will be our first opportunity,” he said.

Prime Minister Sogavare added that the Pacific games project is a major strategy to hold the youth of this country together.

The Government is taking all measures to protect the country’s borders from COVID 19.

In response, His Excellency Mr. Li Ming conveyed warm greetings from the Government and people of the People’s Republic of China.

“PRC will work closely with the Government and leadership to make our relationship grow stronger,” Ambassador Ming said.

Ambassador Mr. Li also brought with him less than 20 engineers who are now working hard to start the whole process of preparing the stadium and other facilities for the very important sports event in 2023.

“For the Stadium, with Solomon Islands cooperation, we will stick to the time line to complete it as schedule, said the Ambassador.

On the pandemic, PRC is happy to be able to provide the necessary help and assistance.

His Excellency Mr Ming said, “Our relationship will be based on equality and mutual benefit and respect.”

China is now at the forefront of the world in the development of the vaccine. Of the six COVID 19 vaccine being tested worldwide, three are from China.

China hopes to share the vaccine with Solomon Islands once it is tested and proven.

He said PRC is looking forward to seeing the Solomon Islands Embassy in China up and running.

Prime Minister Sogavare then reciprocated the PRC Presidents warm greeting saying, PRC can count on Solomon Islands to stand with you in what the UN believe in.

The Solomon Islands new Embassy in Honiara will be opened next Monday.