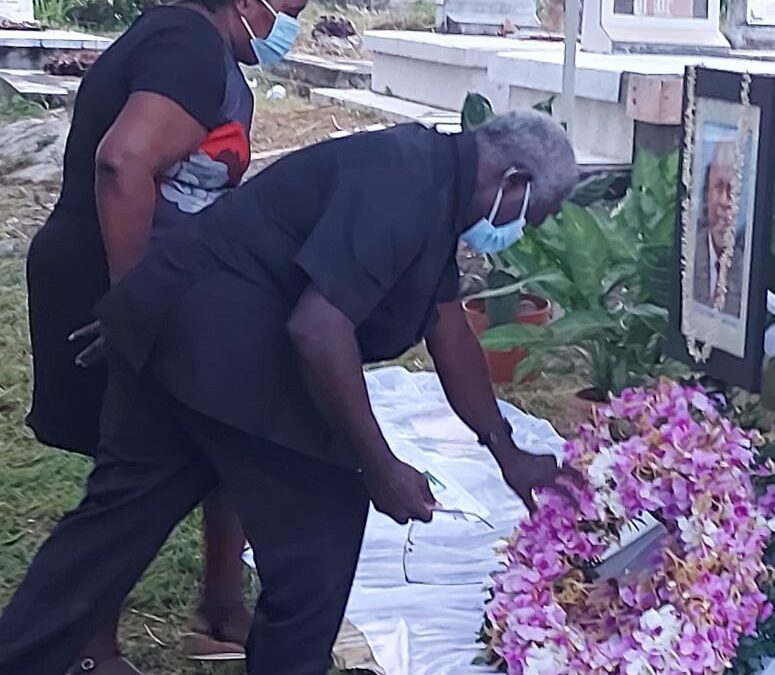 Prime Minister Manasseh Sogavare joined the Governor General, Sir David Vunagi, the Minister of Foreign Affairs and External Trade Jeremiah Manele and other dignitaries to farewell His Excellency, the High Commissioner of Solomon Islands to Papua New Guinea, the Late Barnabas Anga at a burial Service in Honiara this afternoon (Sunday 18 July).

Mr Sogavare said Solomon Islands has lost a son and it is with a heavy heart to bid farewell to a great leader and to thank him for his outstanding service to the government and people of Solomon Islands.

Outside his government duties, High Commissioner Anga is also a traditional leader, a tribal leader who has additional duties to take care of his tribe and family members.

“I must thank his family for bringing up this noble leader who have contributed to our country’s nation building. His service has honoured him a legacy of courage where our future generation will look upon with trust, humility and dedication. This legacy will definitely leave on,” Sogavare said.

The Prime Minister conveyed his deepest gratitude to the government and people of Papua New Guinea for the unwavering care and support provided to the late High Commissioner during his tenure in office until his passing in Port Moresby as well as PNG’s warm affection that comforted his family since his passing.

Mr Sogavare also acknowledged government officials from Solomon Islands and Papua New Guinea and family members of the late High Commissioner, who have dedicated their time and effort to ensure the repatriation process went smoothly.

“It is not an easy task to work on such arrangement during this pandemic period, however with your courage, ability and strength to think and work beyond these challenges, you have made it happen to bring this great man home, and allowed us to gather here to honour him and pay our final respects”, Sogavare said.

“While we have this final moment with the late High Commissioner, let us continue to pray for God’s comfort, peace, love and healing be upon our country, be upon the families, relatives, friends and his work colleagues, as we all mourn this loss”, Sogavare added.

“Go on my brother; rest well, for our Good Lord has promised us a place to be with him during the resurrection morning. You have labored long, I salute you. Until then, farewell to you,” Sogavare said at the burial Service attended by senior government officials, family members, relatives and friends at the Betikama Cemetery.