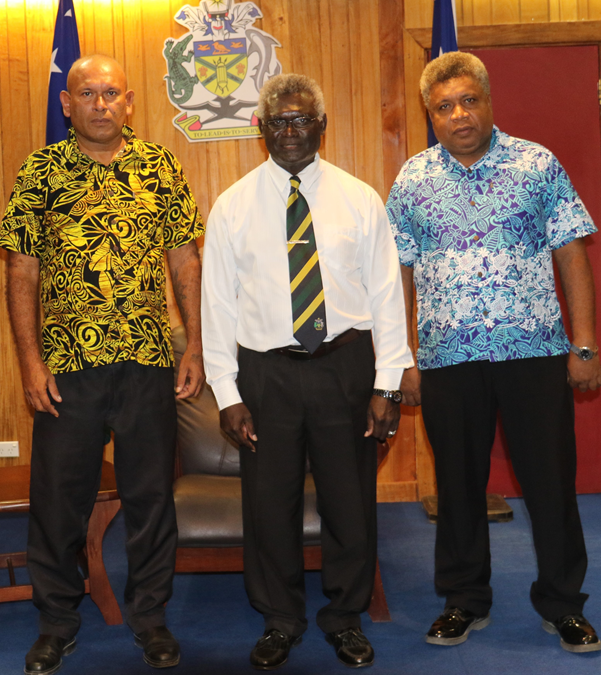 This year’s Second Appointed Day will be celebrated on Thursday 3 June.

“It will be a pride for my executive and the people of Isabel Province to have you as the head of the National Government celebrate with us, should you accept our humble invitation,” he said.

He said the lack of area for expansion of the Buala Provincial Township needs attention. An alternative is to reclaim the Buala seafront to accommodate better and improved development for the Provincial headquarter. This will be done through compulsory acquisition.

Premier Kikolo also handed to the Prime Minister a copy of the Concept Plan for the proposed reclamation.

“Should the process of compulsory acquisition is done, we may need support and financial assistance from the national government,” he stressed.

The Premier said, due to Climate Change, Fera airstrip is starting to experience sea erosion. It would be very expensive to upgrade or maintain the airstrip at its current location.

The only possibility, he adds, is to realign the Airstrip along the Island. Land space is not a problem and can accommodate Dash 8 and other bigger planes.

As the sun sets on the logging sector, tourism is Isabel Province’s new hope. Upgrading the airport will boost the tourism sector.

He said discussion had started with the Commissioner of Lands to reclaim Fera, which is currently under foreign lease.

“We need the National Government through your office to assist in getting this done quickly, Premier Kikolo said.

Welcoming the request, Prime Minister Sogavare verbally accepted the invitation to be part of the Isabel provincial Second Appointed day.

“I look forward to be part of the Isabel Provincial Second Appointed Day celebrations on the 3rd of June,” the Prime Minister said.

The Prime Minister is also grateful to the Provincial Government and people of Isabel province for supporting the national government.

“Thank you for the assurance and support from your provincial government and people of Isabel province towards the national government’s endeavor for the betterment of our people and nation especially in this time of COVID 19.

Prime Minister Sogavare assured Premier Kikolo that requests including logistics for the Provincial Second Appointed Day would be channeled through the right Ministry.