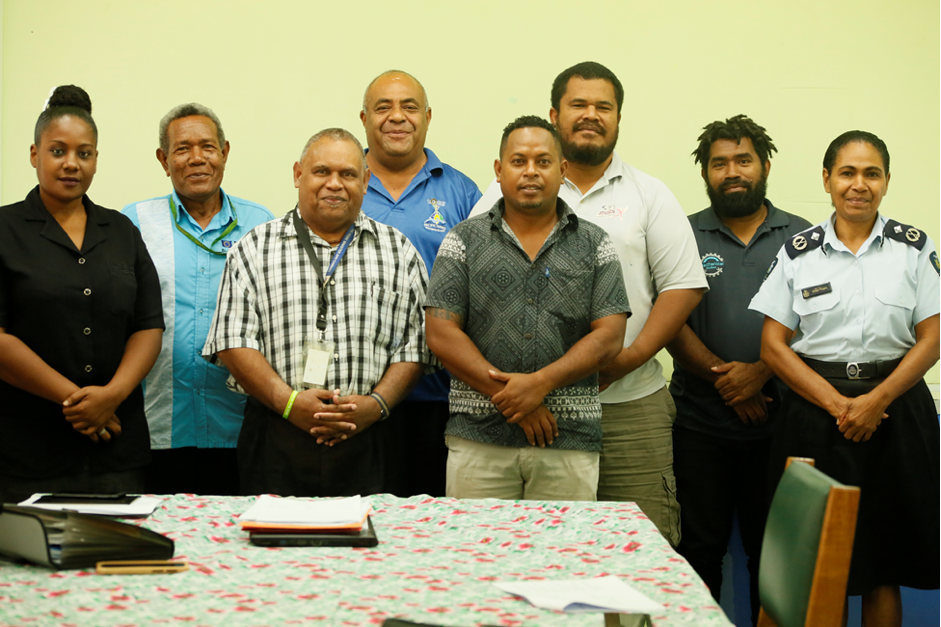 Officials of the Security and Escort Cluster Committee

The Security and Escort Services Committee of the Government Services Integration Committee (GSIC) Officials met on Monday 15 March to discuss their proposed work plan and activities for the upcoming Pacific Games 2023.

A Statement from the GSIC Secretariat stated that the Ministries who met yesterday were from the Cluster Group 10 Ministries, which included the Ministry of Police National Security and Correctional Services, Ministry of Infrastructure and Development, National Hosting Authority (NHA), Honiara City Council, and the Office of the Prime Minister and Cabinet.

The Statement stated that these Ministries deal with Security and Escort Services as it relations to Pacific Games 2023.

“As the Pacific Games 2023 is in Honiara, the Host City, it is important that we have a comprehensive Escort and Security Services system and arrangements in place to deal with Security and Escort Services in the country as we host the Games,”, according to the GSIC Secretariat.

As Solomon Islands will receive thousands of visitors from the region, including from our provinces for the Games, it is important that arrangements be in place so that we have an effective and coordinated Security system and services in place to protect our VIPs, our visitors as well as our own citizens in the country, who come for the Games.

“During the group meeting yesterday, Chair of the Security Services in the Games Organizing Committee (GOC), Assistant Commissioner of Police, Ms Evelyn Thugea, briefed officials on scope of work required under the Games Charter on Security Services for the Games and how we as host of the Games will provide. The Safety and welfare of our visiting athletes, VIPs, and our own citizens are of paramount importance and we must provide these services as Host Country”, according to GSIC statement.

Other topics discussed included labor of Police Operations and other security operators in the country to assist Police in its operations during the Pacific Games, as well the protection safety and escort services of our VIPs and Athletes during the Games.

As part of the Games operations, ACP Thugea added that Police work force, will be boosted to ensure a safe and free Games where people and families enjoyed the Games as well as its related activities.

The Ministry of Infrastructure and Development informed the meeting that they will be working closely with Royal Solomon Islands Police Force for safe traffic escort of our VIPs and Athletes.

The Honiara City Council will also be look at strengthening its law enforcement work Force to support Royal Solomon Islands Police Force in its general policing work in proving a safe and secured environment for the Pacific Games.

It is important that early discussions with relevant Government Ministries and Responsible Authorities be held so that a whole of Government approach and have an effective and coordinated Policing and Security system in place for the Games.

Meanwhile, the GSIC Secretariat in the Office of the Prime Minister Cabinet noted the good progress of work done to date, and plans in place for the Security and Escort Services system for the Pacific Games 2023.

It also called on support and understanding of Honiara residents and the public to support the work of these Government Ministries as they embarked on their important tasks, preparing us for the Games.

The Cluster Group 10 Ministries are part of the eleven Cluster Groups where Ministries have been assigned to different functions and responsibilities to perform and support the Games Organizing Committee, the National Hosting Authority, and the Government to successfully deliver the Pacific Games in 2023.