The Solomon Islands Government has reassured the Pacific Islands Forum Secretary General, His Excellency Henry Puna of its cooperation and support during his tenure in office.

Minister of Foreign Affairs and External Trade Hon. Jeremiah Manele conveyed this message on behalf of the National Government to His Excellency Puna during a meeting between the Pacific Islands Forum Secretary General and the government in Honiara.

“Thank you, Secretary General, for your leadership. Thank you for supporting us during our dark days. Congratulations on a job well done to date. We will work with and support you. We are stronger together,” stated Minister Manele.

Discussions at the Cabinet room included sharing and updates on regional issues and developments as well as commitment to cooperate more closely at all levels to address issues of common concerns.

The PIF-SG used the meeting to update the Government on the roll out of the Suva Agreement, Japan’s proposal to discharge ALPS Treated Water from its Fukushima Nuclear Plant. Progress on work to roll out the 2050 Strategy for the Blue Pacific Continent, Review of the Regional Architecture were also amicably discussed.

Foreign Minister Manele underlined, over and above all, the unity of the Pacific Island Forum is paramount.

“Thank you for the outreach. In the midst of foreign influence, we must take ownership of our organisation (PIF),” Minister Manele strongly stated.

Senior Government officials from the Office of the Prime Minister and Cabinet and line Ministries contributed technical support during the meeting.

The PIF Secretary General also briefly paid courtesy visit on Prime Minister Hon. Manasseh Sogavare where both leaders exchanged traditional gifts and had one on one dialogue before meeting Foreign Minister Manele and government officials. 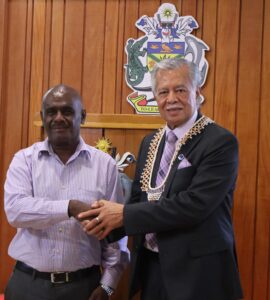 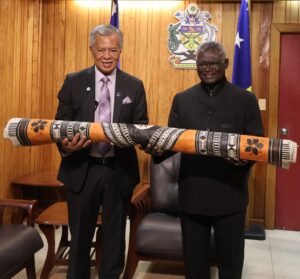