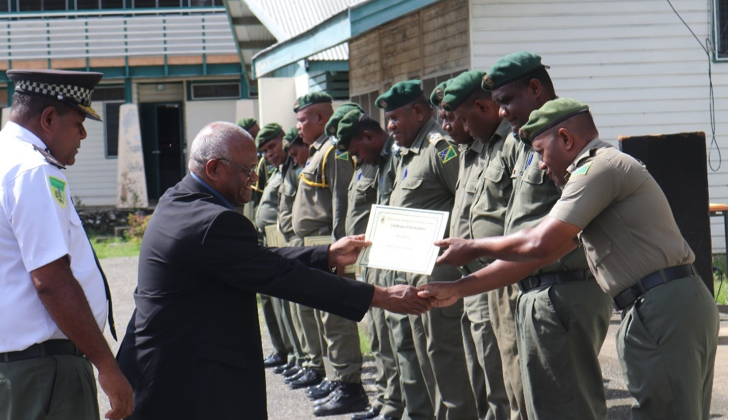 The ceremony was held at the Correctional Service Headquarter Rove, during the Commissioner’s Parade on Wednesday 2nd.

Speaking during the ceremony, the Guest of honour Ombudsman Fred Fakarii encouraged the participants to put into practice what they have learned from the workshop and not being judgemental to anyone.

He said that the Office of the Ombudsman has the responsibility to ensure that the services of CSSI is functional as much as possible. He further said that, we have human resolutions that commands our actions, to provide excellent services to the wellbeing of our people.

“Sometimes the general public perception of  the people you care for at these CSSI Centres, and try to help and restore back to normal life, as bad people who should be kept well out of the communities. No these are people just like ourselves who needed help. We should all actively participate in whatever process we can to help them quickly restored to normal life and reintegrated into   the community and live a productive life. As a Christian country, we should not judge anyone”. He further revealed that the Bible says do not judge anyone as there is someone who will judge you both.

Commissioner Manelusi reiterates the problem of bad decision-making within the Public Service and it is a major concern for the government.

Manelusi believes that the manual received will assist CSSI officers to make good and wise decisions to prevent waste of government resource. This enables the state to use available resources on urgent sectors for the development and good of our people.

Commissioner Manelusi hope all would apply those tools, document and manual to assist their subordinate officers under their command, to make good and wise decisions as public service officers.