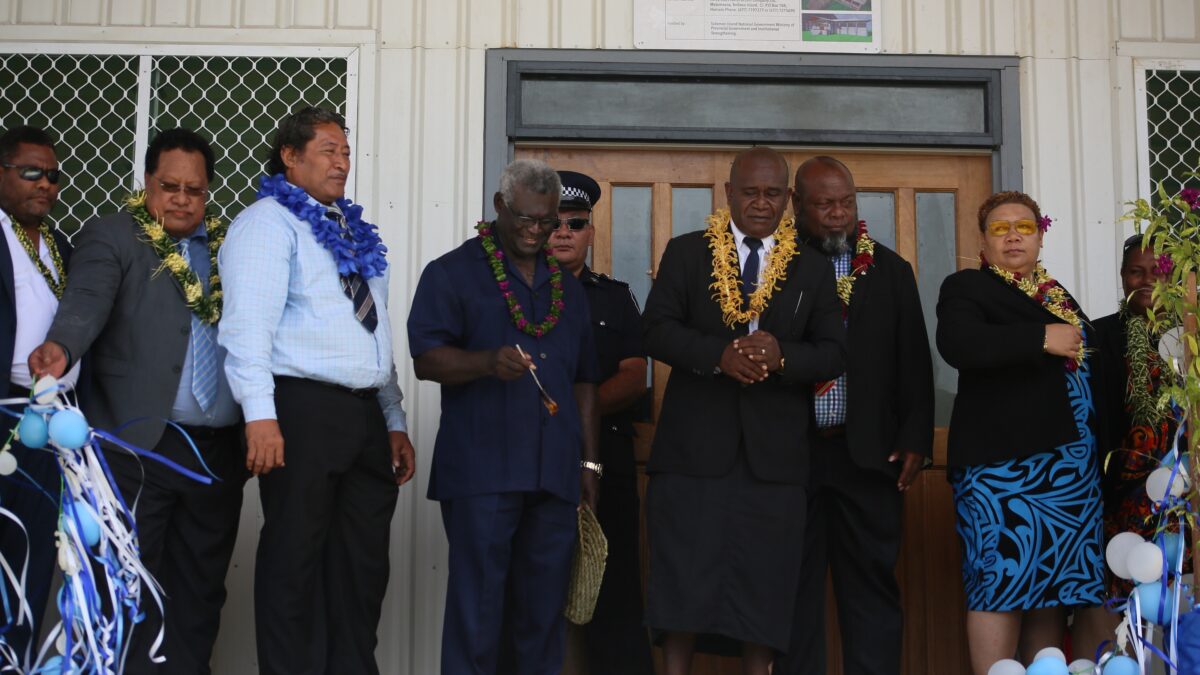 Rennell Bellona Province new Office Complex building is one of the provinces’ biggest achievement after 27 years according to Premier Willie Tuhagenga.

Speaking during the event to commemorate the province 27th Second Appointed Day in Tigoa station yesterday (26/08/20), Premier Tuhagenga thank the support of the national government for Provincial Capacity Development Funding (PCDF) which see the completion of the administration building.

He thank the Minister for Provincial Government and Institutional Strengthening and team for the continuous support and the facilitating of the completion of our Office Building.

“The completion of the new Office Chamber is one of our biggest achievement in 2020.

“The core administration of the province was at the verge of collapsing.

“There were many factors attributed to the downfall of our administration but the absence of a proper office working environment in my opinion, this was the main cause,” he highlighted.

He said the building is a gift from the national government through the Ministry of Provincial Government and Institutional Strengthening.

“I would like to thank the Honourable Minister and his hard working team for facilitating the completion of our modern office after 27 years since we become a province.

“I also wish to thank and to congratulate Three Star Construction for successfully completion of the building,” he remarked.

The Premier in his remarks also highlighted some of his government’s achievement; stabilizing compliance issues to qualify for the PCDF, cost sharing arrangement with Solomon Telekom for the construction of a 50 meter mobile tower at Lake Tegano and Tigoa tower upgraded to 3G and proposals for Bellona towers to boost tourism and supporting World Heritage Site access road for tourism purposes.

Minister of the Ministry of Provincial Government Institutional and Strengthening (MPGIS) Hon. Rollan Seleso in his remarks highlighted the success story of the funding.

“It has been the long standing aim of the ministry to provide funding for every province for an established headquarter that is modernized and ready to support the service delivery efforts of the province.

“Rennell Bellona is amongst eight other provinces that now have an established headquarter building that can be proud of,” Minister Seleso remarked.

The office complex located in the heart of the small station cost about SBD3.5M. The contractor, a local Renbel construction group commence the construction last year. United Nations Development Programme will support procuring a new generator power set for the complex. Government Information Communications and Technology Support Unit (ICTSU) will continue on the internet connection to enable provincial departments to conduct their work effectively.

Prime Minister Manasseh Sogavare, Renbel Premier and MPGIS Minister along with 14 MP’s of the visiting high level delegation has been given the honour to officially open the new building witnessed by a packed crowd at small provincial station.

Theme for this year’s celebrations is “Redirecting Rennell and Bellona Province through Reforms and Good Governance.”