The National Statistics Office was crowned winner of the annual Christmas choir competition held by the Ministry of Finance and Treasury last Friday.

Dressed in their maroon and orange shirts and dresses with candles in their hands, the Statistics team shone bright and colorful as they walked up to the front of the audience to sing. 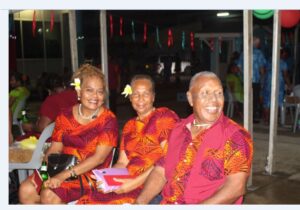 After the moment of silence, the music to the song “A child is born by Ray Kelly” filled the quiet night, and the group started to sing.

They presented a strong united front as they joyfully sang their hearts out in time to the music, maintaining their tone and pitch until the end.

Much laughter came forth from them as they bowed to the audience and went back to their seats amidst the clapping and cheers from the audience.

Their prize was one thousand dollars. 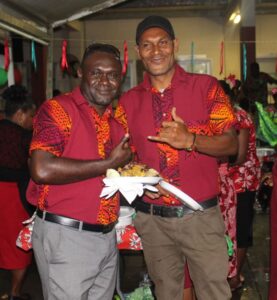 Consolation prizes were presented to Treasury and Internal Audit divisions.

The event on Friday also saw one of the NSO staff receiving an award for being the Most Outstanding staff in her Division.

Charity Karina, from East Malaita has worked at the NSO since 2019, as one of its maintenance staff.

She was pleasantly surprised to hear her name called for the award.

“I was surprised but very happy too at the same time. The award means a lot to me and my work at the NSO. Next year I will work much harder.”