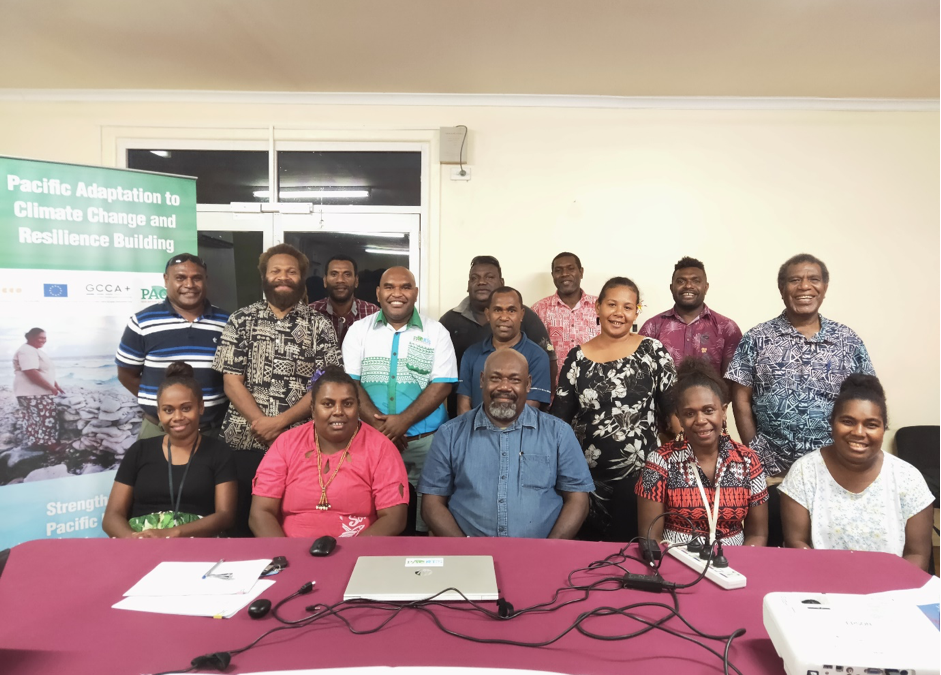 The Ministry of Environment, Climate Change, Disaster Management and Meteorology (MECDM) with support from the Pacific Adaptation to Climate Change and Resilience Building (PACRES), has completed a 2 days Provincial Consultation on the Review of the Draft Climate Change Policy.

A courtesy call was made to the Guadalcanal Province Premiers Office on the 21 September 2022 by the Acting Director Climate Change Division (ADCCD) Mr. Thaddeus Siota and the PACRES project Officer. The Acting Director CCD begin by thanking the Honourable Premier and his executives, MPAs, and HODs for accepting the invitation to participate in the Nation Climate Change Policy consultation workshop.

The Acting Director CCD then gave an overview of climate change and its impacts in the country. On that note, he explained that climate change is a cross-cutting issue, which affects all the important sectors in our country. As such, it is important to understand how climate change can be addressed in terms of adaptation and mitigation. Further, in his remarks, he highlighted the purpose of the consultation workshop. That is, to review the National Climate Change Policy (2022 – 2026) after the initial policy (2012 – 2017) was due. Reviewing the policy is important given that some important issues were not captured in the initial policy and there are many upcoming developments, for example, carbon trading. For this reason, the climate change division thought that it is important to consult with the provinces to review the policy. The Acting Director then report the progress of the NCCP consultation. He stated that this is the third review conducted, the first review was in Central and second in Isabel Province.

The visit was welcomed by the Premier Mr. Francis Sade and is looking forward to participate in such a national document. Mr. Sade further states that climate change is a cross cutting issue that is affecting us gradually such as sea level rise, food security, water security, intensified Tropical Cyclones etc. The Premier stated that it is an honour to help facilitate in the development of the Climate Change Policy by the Province.

The 2 days Provincial consultation with the Guadalcanal Province was successfully completed on the 23 September 2022. In his closing remarks the Hon. Premier thanked the Acting Director CCD and the team from MECDM, for the two days consultation meeting, for the opportunity to include the Guadalcanal province in the NCCP review. That is, this consultation meeting is a way forward for the Guadalcanal Provincial government to tackle challenges induced by climate change. The Hon. Premier is certain that the climate change policy is a way forward for this country. However, he raised an important concern and that is, although the past provincial governments have involved in the development of the initial policy, they have been left out in its implement. Although, some line ministries took part in its implement, it has never been part of the planning and programming at the provincial government (GP). As such, he saw the consultation workshop as an opportunity to discuss how everyone become players when it comes to implementing the policy.

The current reviewed Climate Change Policy is an ambitious policy that emphasis on the progressive resilient safe and secure Solomon Islands from climate change impact and climate induced disaster with a focus on delivering low emission pathways for the country 2050. That enhances adequate adaptation and disaster risk reduction/ resilience and sustainable communities, ecosystems and economy for Solomon Islands.

The National Climate Change Policy Provincial Consultation will be conducted for all Provinces in Solomon Islands. It is important that the consultation on the climate change policy is important to get feedback of the proposed policy before it is finalised for the endorsement of Cabinet.