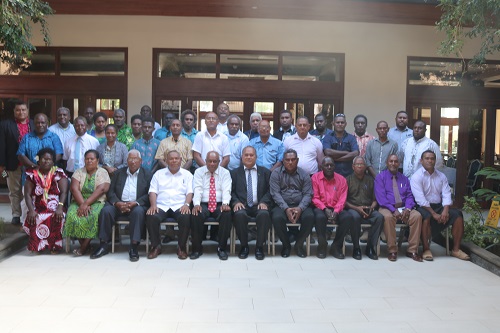 The national symposium started on Monday 31st August and will end 3rd September 2020, the symposium attended by church leader’s representatives from all churches and is currently underway at Mendana Hotel.

Speaking at the opening of the symposium Hon Minister Samuel Manetuali thanked and acknowledged church leaders for make an effort and honor the invitation by the national government through the Ministry of Traditional Governance, Peace and Ecclesiastical Affairs to attend the symposium.

Minister says “I am so grateful to host this first ever national symposium for the head of churches and administrators since the renaming of this ministry form MNURP to the Ministry of Traditional Governance, Peace and Ecclesiastical Affairs”

He highlighted, the national symposium is one of the DCGA Government priority policy and the hosting of this symposium shows Government commitment to the churches.

Minister added the theme of the symposium is “Strengthening partnership with churches for sustainable peace, unity and nation-building”.

He said it was a clear manifestation that DCGA government policy statement 2019-2023, the Government makes no mistake that one of its policy priority is to recognize and support the roles of ecclesiastical institution in the country.

Therefore, the symposium is an opportunity for church leaders to further strengthen its partnership with the government.

He said by the end of the four days symposium an agreement must be reached on a strategic road map or platform to enable church institutions as equal players with the government.

Meanwhile, Permanent Secretary Peter Mae on his welcome remarks said the hosting of the national symposium is part and partials of the initiatives that the ministry has hands on with the government policy mandate.

He says “The symposium is government commitment to churches to further strengthen its partnership”.

PS thanked the participants says “your attendance shows your commitment towards government policy”, he urged all participants to fully engaged and contribute to the symposium.

During the symposium session Church leaders thanked the government for recognizing the churches in the country.

At the end of the symposium a communiqué must me reached between churches and the government and also a partnership framework.