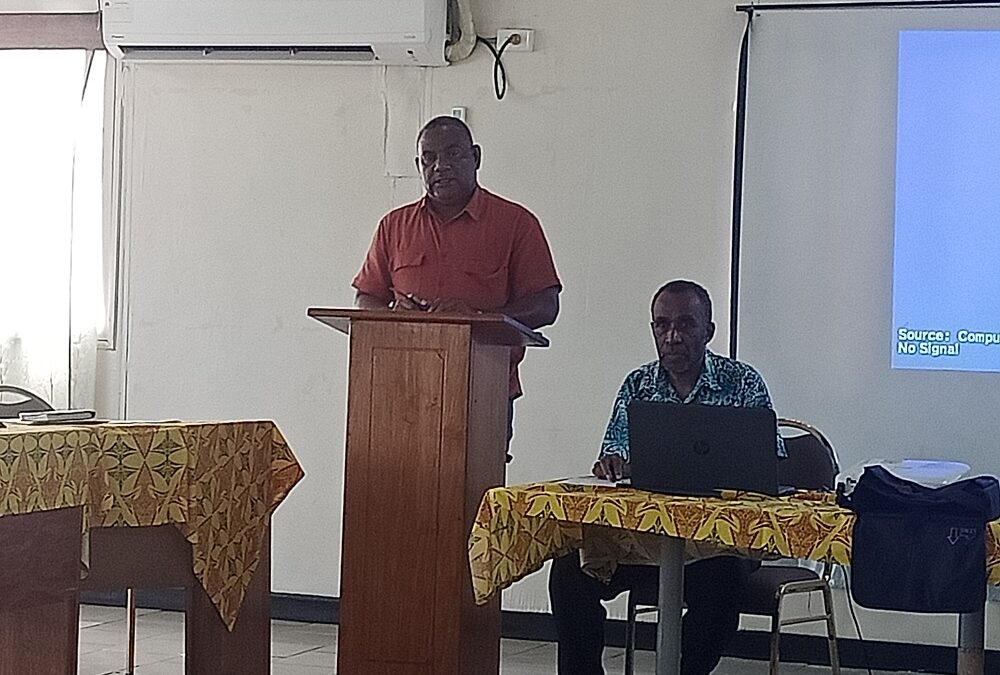 This Review workshop was facilitated by the Corporate Service Division of the Ministry, attended by its Permanent Secretary, two Deputy Secretaries for Technical and Corporate services, its four Heads of Divisions and their Deputy Directors including Head of its Provincial offices in Malaita, Guadalcanal, Choiseul and Western provinces. The purpose of this Review consultation workshop is part of its sector-wide consultation in reviewing its first-generation Human Resources Development Plan 2013 – 2017 and the findings of a Scoping Report that was simultaneously carried out on its first generation HRDP 2013-2017.

In delivering the key Note Address at the opening of the said workshop, Permanent Secretary Peter Mae made welcomed all the attending Deputy Secretaries, the Heads of Divisions and their Deputy Directors including all Provincial Officers, and gratefully thanked them for making the positive respond to attend the said workshop.

The Permanent Secretary had echoed that “This review consultation workshop is vitally important as the ministry’s first-generation HRDP 2013-2017 is well due for this purpose. Given the availability of the findings from the HRDP Scoping Report, this will further add value to the comments and inputs that will be shared during the two-days of the said consultations.

In so doing, he further articulates four reflections that whilst being appreciative of the fact that the Ministry now undertakes the said review due to its HRDP is well due for such review, the basis to doing so lies on the situational and foundational importance that this review deems warrants for the Ministry of Traditional Governance, Peace and Ecclesiastical Affairs (MTGPEA), if the ministry has to keep its institutional functions, responsibilities and mandates relevant and competitive.

Just like the rest of the Ministries and agencies in government, it is tantamount on the Ministry to ensure that it continues to sharpens its competitive edge and to be persuasive in not falling into its own institutional isolation and irrelevancy caused about by the impounding internal and external dynamics and challenges at the local, national, regional and international levels.

He also stressed that the Ministry’s efficiency and effectiveness to its programme delivery and that of its human resources can only be, when both side of this demand or expectations are given equal and balance capacity development and enhancement. Institutionally, there can be the choice, in the extent of how organizations aspire their human resources performance and programme delivery to be at whichever pro rata. Whichever the take is, the structural justice culminated at the end of the day, and of which, will inform this equal and balanced world-view of its second-generation Human Resources Development Plan matters to this effect otherwise.

The Permanent Secretary in this regard, reiterated this call to all attending executive and senior officials of the Ministry for their past commitments and efforts in developing the first-generation HRDP 2013-2017 (which indeed have delivered its institutional objectives to the ministry and its human resources), and echoed the same, and encouraged all officers to strategically contribute and provide insightful ideas and inputs during this two-days review consultation towards reviewing and eventually coming up with a second-generation HRDP that leaves no one behind, and equally so, one that is able to respond and becoming resilient to the current state of affairs of the government and country now and into the future.

Meanwhile, Permanent Secretary Peter Mae gave credit and acknowledged the former Ministry staff for their commitment and knowledge rendered to the development of its first-generation HRDP 2013-2017 and wishing all officers attending the workshop to contribute fully and make used of the workshop to enhance towards the development of its second-generation HRDP of the ministry later in the year.