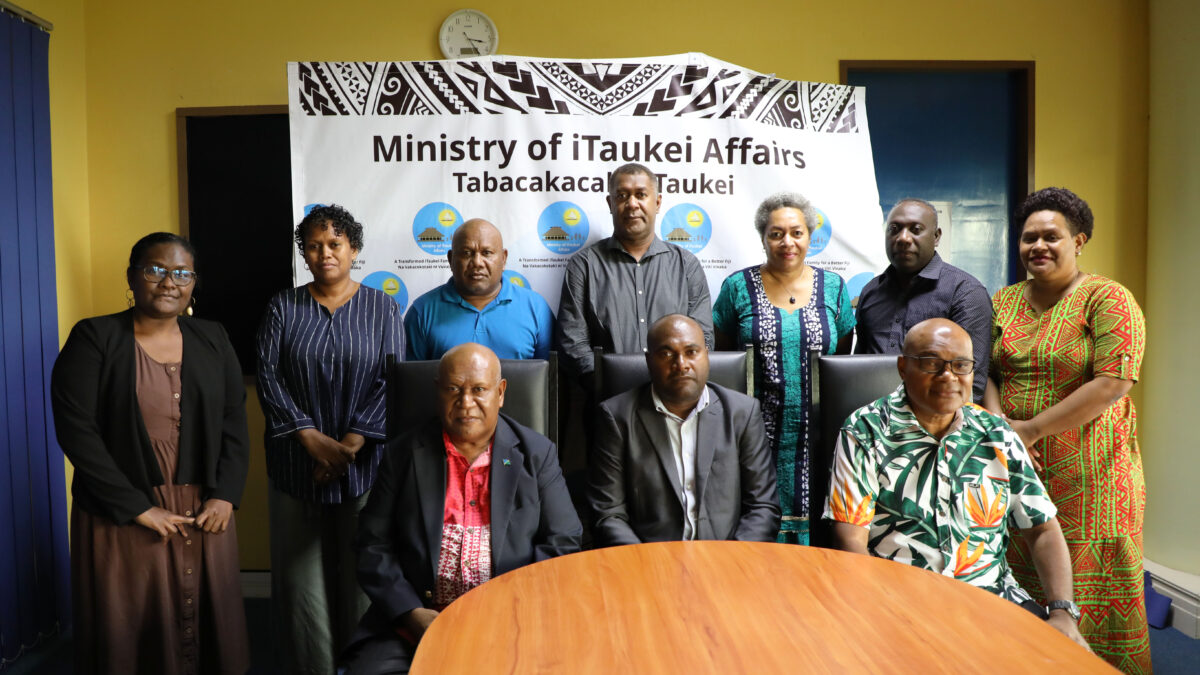 The Ministry of Rural Development (MRD) policy management team that is currently in Fiji on official engagements had a successful meeting with the Ministry of iTaukei Affairs (MTA) on Friday 11th November, 2022 in Fiji.

Led by the Solomon Islands High Commissioner to Fiji His Excellency Joseph Ma’ahanua and the MRD Permanent Secretary Dr. Samson Viulu, the team met with the Permanent Secretary for the Ministry of iTaukei Affairs, Pita Tagicakakirewa where they were able to discuss legislative mechanisms and policies that guides the ministry’s (MTA) operation.

The meeting was dubbed a success as the visiting delegation learnt more about the functions and roles of iTaukei and how Fiji implement mechanisms through the iTaukei Affairs to support its indigenous people and to guarantee the development needs of its rural communities are addressed.

Permanent Secretary Dr. Samson Viulu took the opportunity and informed his counterpart, PS Tagicakakirewa on the legislative reforms that MRD is undertaking which include the development of the first ever Solomon Islands Constituency Development (SICD) policy that would lead towards reforming constituency developments in Solomon Islands.

PS Viulu also informed his counterpart on the Constituency Development Fund (CDF) programme that MRD is administering and how it is implemented in the 50 constituencies towards improving social and economic livelihood of rural Solomon Islanders.

While acknowledging H.E Commissioner Joseph Ma’ahanua and PS Viulu together with the visiting team, PS Tagicakakirewa said that in relation to rural development framework, Fiji has two administrations.

He said the first one is called District Administration and the other one is the iTaukei Administration which is under the Ministry of iTaukei Affairs adding Fiji is using an integrated rural development framework. 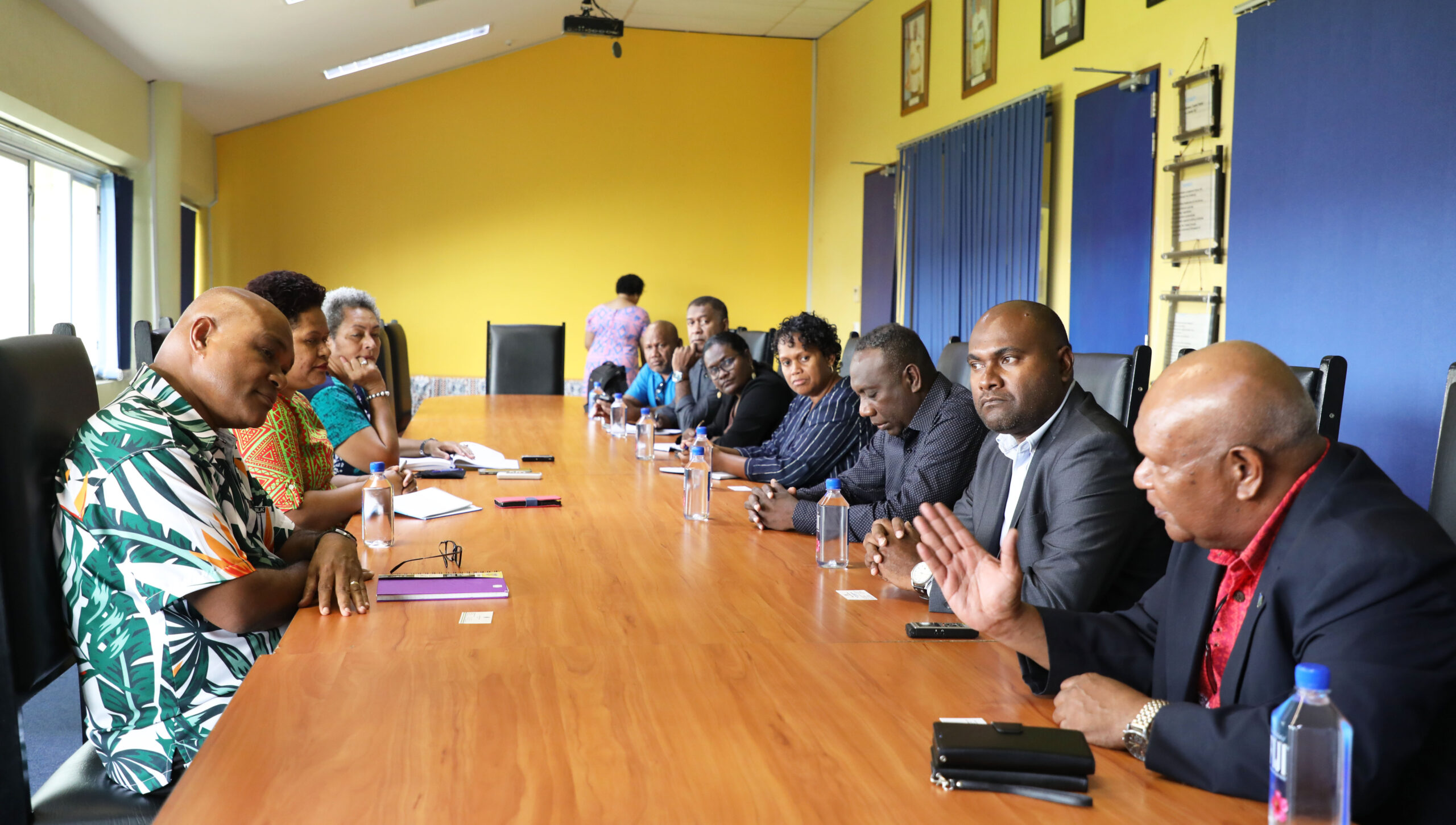 Solomon Islands Commissioner to Fiji Joseph Ma’ahanua (close to camera) raised a point during the meeting with iTaukei Affairs.

He also explained to the delegation how iTaukei operates and how it works with the Ministry of Rural Development towards implementing their development programs in the rural communities in Fiji.

PS Tagicakakirewa added that his ministry (MTA) was pleased to support in this way and said that they are looking forward to provide technical support in terms of policies and legislative reforms in the near future towards advancement of rural developments in the Solomon Islands.

Meanwhile, PS Viulu on behalf of the Minister for MRD Hon. Duddley Kopu and his team expressed profound gratitude to PS Tagicakakirewa for his time and for going through the functions and mechanisms that iTukei is operating on with the MRD delegation.

PS Viulu said that his team has learned a lot from the meeting through information shared adding that there are takeaways that will certainly be integrated into the reforms that MRD is undertaking particularly the new SICD Policy that will lead towards reforming constituency developments in our rural areas.

“The current MRD team is more than determined to improve the facilitation and implementation of the CDF and there are potential aspects we have learned from the presentations by the iTaukei Affairs PS where we can embark on to improve rural development and livelihood of our people in Solomon Islands.

“Thank you for this very important and detailed meeting.

“We know we will not be able to adopt the full iTaukei model but we will try to adopt some aspects of it that are relevant to our local context,” PS Viulu stressed.

“What we have learned and come to realize from your presentation is that, you have all the relevant legislations and institutional setups in place. DCGA through MRD is embarking along the same path to establish relevant laws to anchor long term tangible development in the constituencies”, PS Viulu told his counterpart. 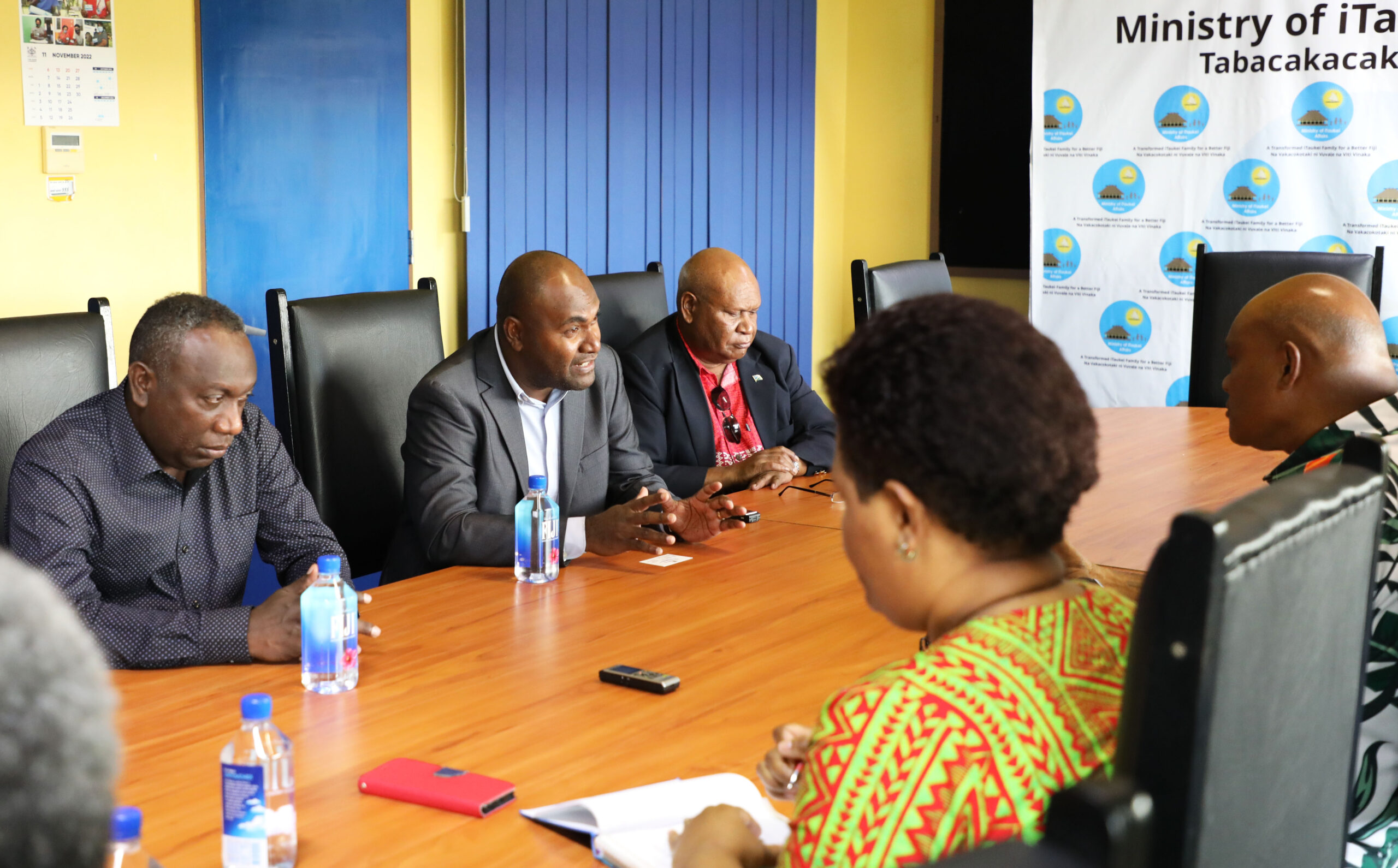 PS Samson Viulu raised a point during the dialogue.

MRD mission team also learned that the Fiji Government had set up the Fiji Holdings Limited which is owned by the iTaukei people and owns a good number of commercial properties and businesses.

The visiting team from MRD has also learned from the discussions with the Ministry of iTaukei Affairs that it provides financial support to iTaukei entrepreneurs through the banks as loans instead of direct cash grants.

With MRD embarking on the new SICD Policy, the mission is also an opportunity to establish and forge new partnership with organizations both public or private enterprise working in similar areas and also to customise Fiji’s other successful best practices in the productive and resource sectors towards advancing rural development in Solomon Islands.

Another determination of the mission is to validate SICD Policy with designated key informants of the University of the South Pacific (USP) particularly Solomon Islands academics and senior working people of Solomon Islands residing in Fiji.

The MRD team will also use the opportunity to visit specific Fiji Government Ministries especially in the productive sectors such as Agriculture, Fisheries, Forestry, Tourisms, Commerce and other sectors that are relevant to rural development in Solomon Islands. 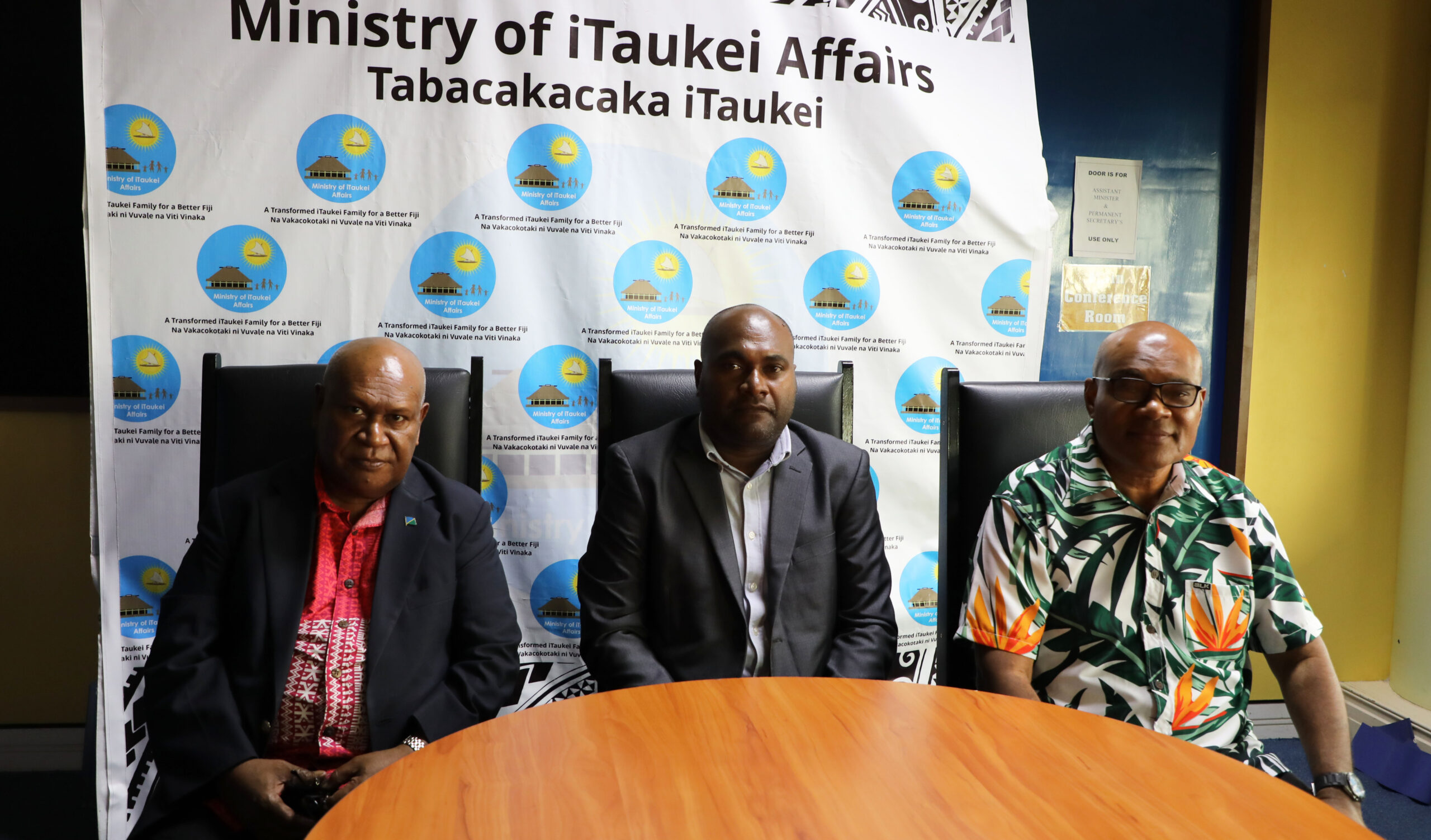 The Ministry of iTaukei Affairs (MTA) is responsible for developing, implementing and monitoring government programs focused on the governance and wellbeing of the iTaukei people.

According MTA, it provides a direct link between Government, iTaukei institutions and its administration across the fourteen provinces.

“Through its various institutes, it is the custodian of official records relating to iTaukei land, fishing grounds, headship titles, traditional knowledge and expressions of culture; it’s mandated to deal with dispute resolution over land, fishing grounds, chiefly and traditional headship titles; it safeguards and preserves language and culture through advocacy programs. The Ministry also administers the Centre for Appropriate Technology and Development.” 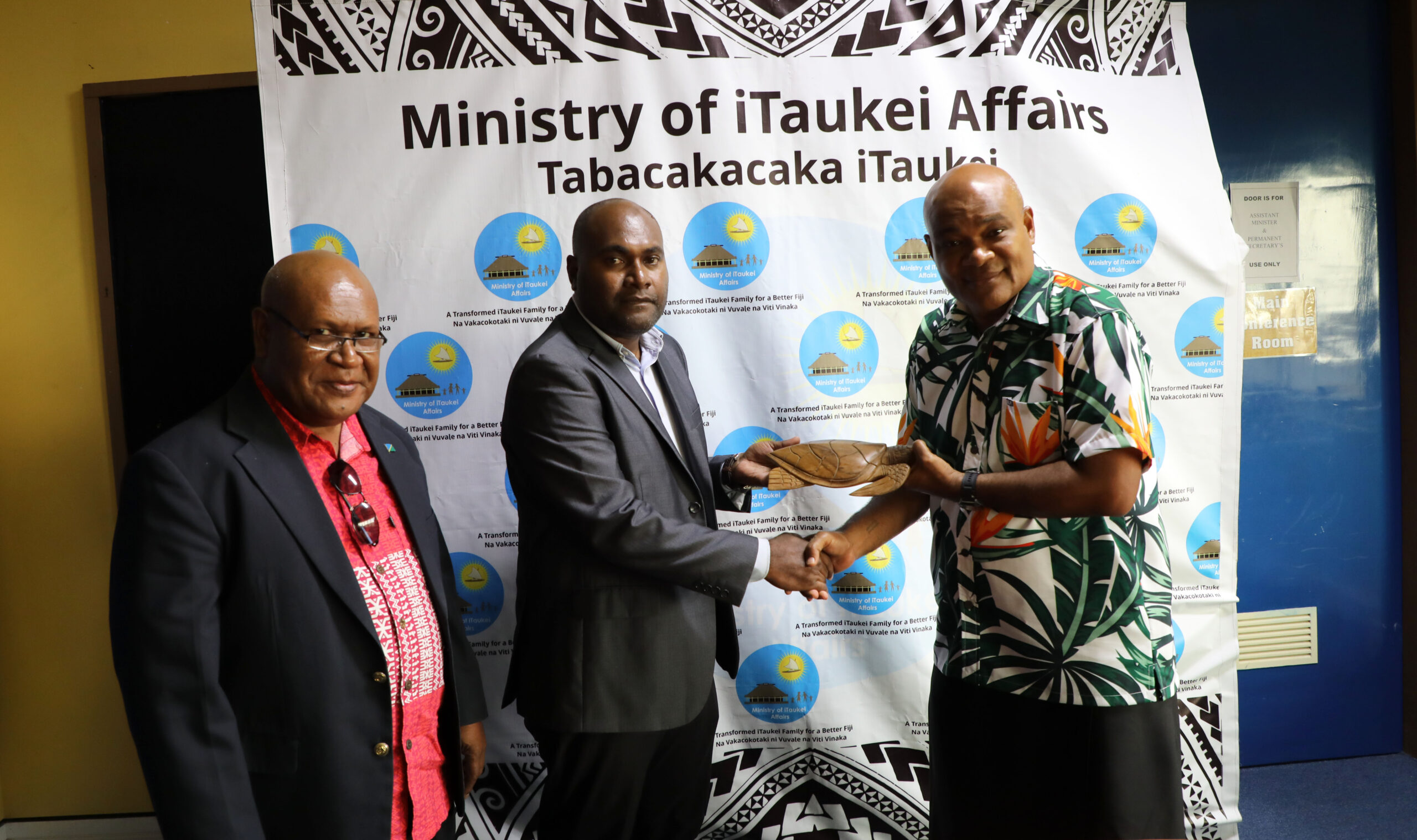