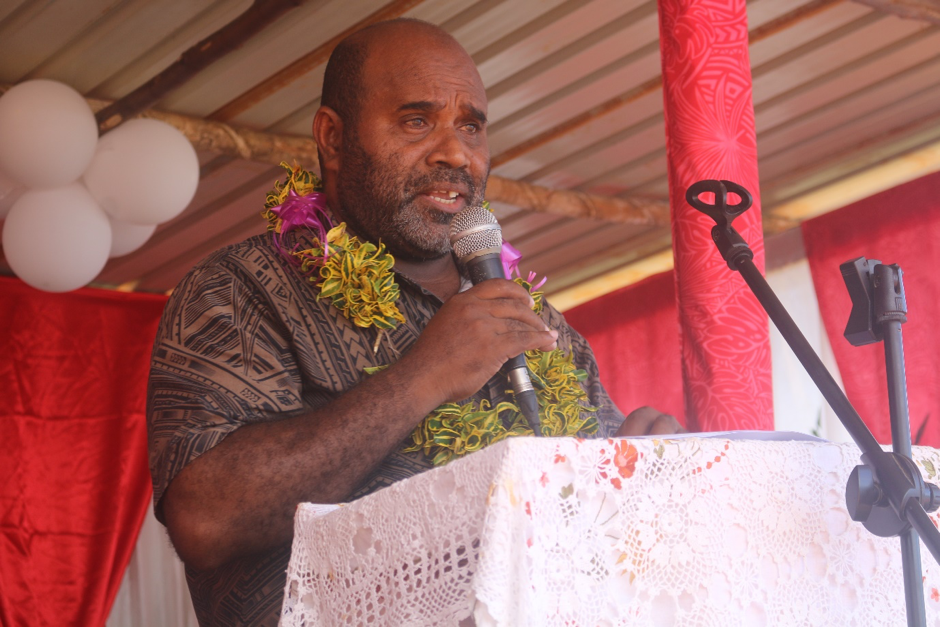 Deputy Premier Malaita Province Hon. Glen Waneta delivering his remarks during the handover of a new classroom at Waneagu CHS 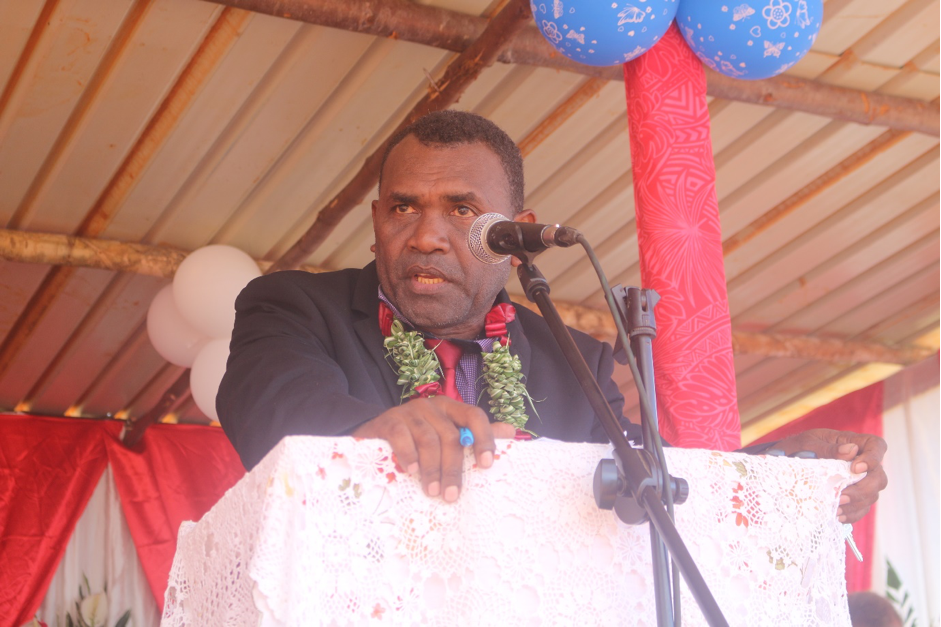 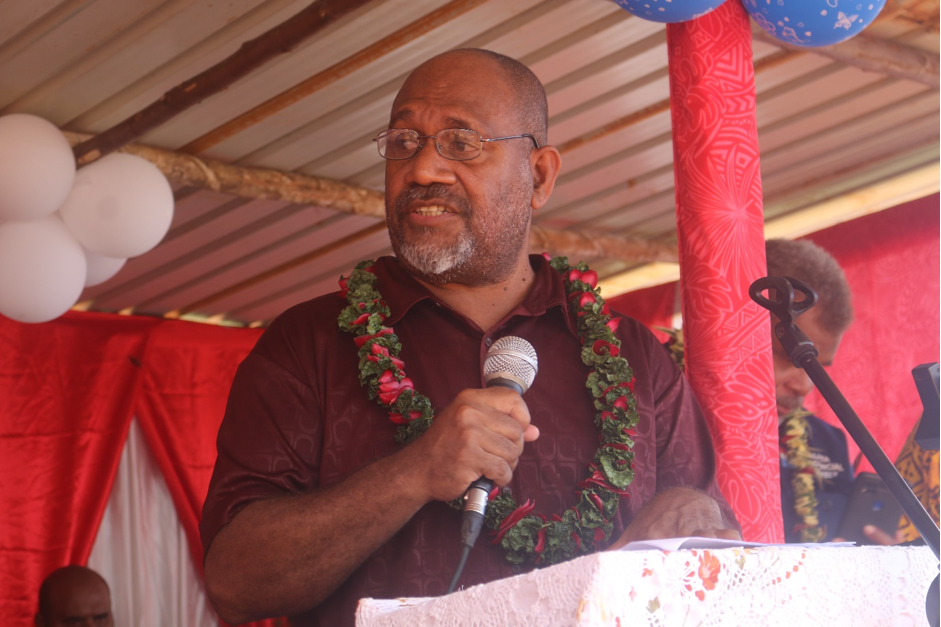 Speaking at the official handover ceremony, Deputy Premier for Malaita Province Hon. Glen Waneta congratulated the completion of the project stating that Malaita Provincial Government prioritises education and having such quality classrooms for children is important for better learning that will produce good school outcome. He said that with the provision of the classroom, he is hopeful that children from that region will be able to learn in the comfort of the new classroom and someday excel to become leaders of some sort in the Province or the country.

The Deputy Premier applauded the National Government through MPGIS for availing PCDF funds for projects implemented by Malaita Province, one of its beautiful fine outcomes was being witnessed in the handover ceremony. Hon. Waneta stated that the PCDF classroom is a testimony of the partnership the National Government has through the MPGIS with the Provincial Government, the Waneagu communities, teachers and students, and parents in the education sector.

He also applauded Waneagu Communities and stakeholders such as the local AW Construction for the concerted efforts in the completion of the project a remarkable feat worth emulating by other local contractors in the Province. “My good people because of such strong spirit of cooperation and industriousness, I am pleased to announce that a fisheries project for Sisifo has been approved”, stated Hon. Waneta much to the gratefulness and cheering from the packed crowd.

Speaking earlier, Provincial Finance Minister and MPA for Ward 17, Hon. Nelson Erick Lenty lamented the challenges that were faced during the implementation phases of the project but acknowledged his people for the patience, understanding, cooperation and hard work that culminated in the completion of the new 6 block classroom, an achievement of humongous proportion, he stated. He urged them to never let petty issues disrupt progress of any future development projects but rather to openly support it for the sake of service delivery in East Kwaio.

He stated that the theme for the celebration “Building a strong partnership through a better learning environment for academic advancement” reflects the very nature of how people strive to work together for the improvement of education infrastructures for the advancement of education of their children in spite of all kinds of challenges they are facing.

Speaking on behalf of the Minister for MPGIS who was unable to attend the handover ceremony due to other important official competing commitments, Guest of Honour for the handover ceremony, PS for MPGIS, Mr. Stanley Dick Pirione, stated that he was very honoured indeed to officiate the handover of a new wonderful and magnificent classroom that will directly benefit the education of the children in East Kwaio for many years to come.

He stated that the PGSP is not only about delivering tangible projects, but also supporting the institutionalisation of international best practices in Public Financial Management and Public Expenditure Management system at the Provincial level. Due to these practices, previous Auditor General’s report provided a clear testimony that Malaita and most Provinces are indeed improving their internal control systems since the inception of the PGSP with its PCDF in 2008 (14 years ago). 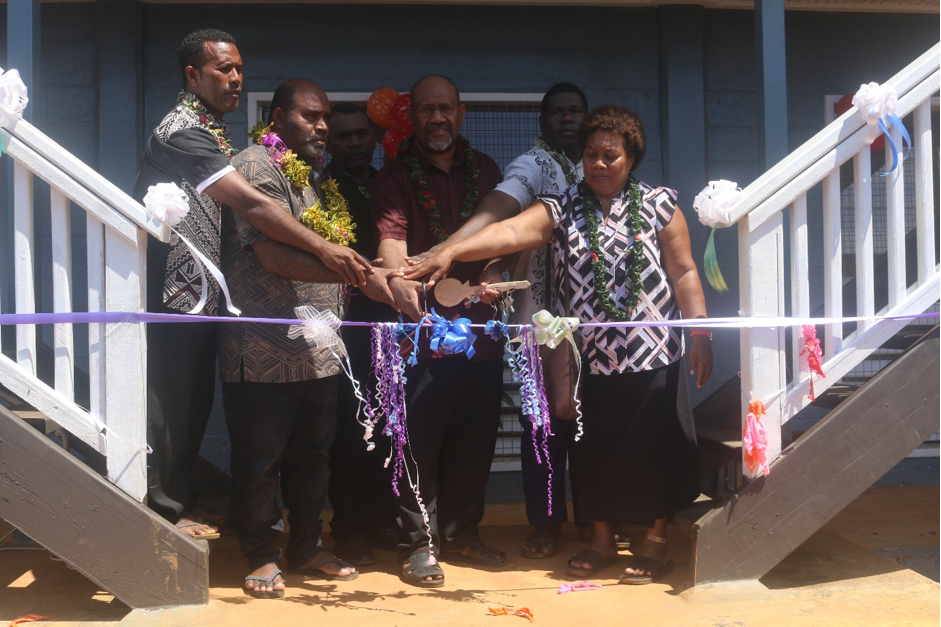 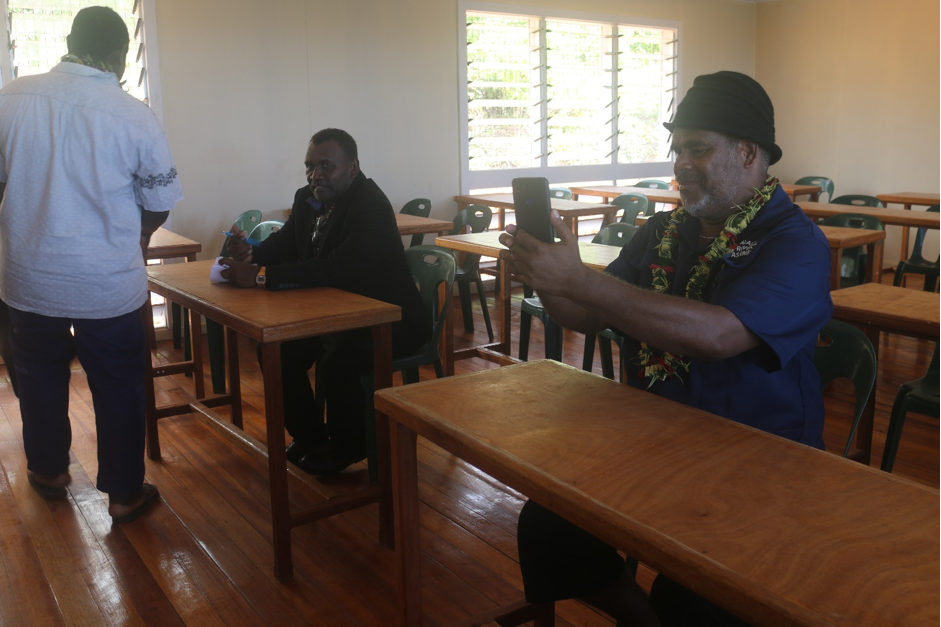 Speaker for Malaita Provincial Assembly Mr. Ronnie Butala taking a selfie inside one of the classrooms while Hon. Nelson Erick Lenty looks on as they tried to feel the students’ classroom desks

Giving his remarks, Principal Education Officer for Malaita Education Authority Mr. Andrew Adai informed the guests especially teachers and parents of Waneagu CHS that the completion of the classroom now meant that the proposed introduction of F6 at the school will become a reality in 2023. He said what is yet to be done now is school registration. Once that is done then a F6 will be a reality in 2023.

Speaking on behalf of the Contractor AW Construction, Spouse of the Late Hon. Alick Butala (who had passed on, may he RIP) Mrs. Wendy Alick gave her brief remarks where she thanked the Ministry, Malaita Province and the Community of Galilee and surrounding areas for the support her husband and boys received during the construction of the classroom. “Having a class room of such quality and size, does not come easily therefore I call on all of us children and adults to take great care of this wonderful gift so that it lasts to benefit many more children in the future.

Similar sentiments were echoed by both the Head Master of Waneagu Primary and Principal of the Waneagu CHS who assured the guests in their remarks that the teachers, students and parents of the school are going to do their best to look after their new classrooms.

Celebrations to mark the occasion of the handover began with a flotilla of decorated dugout canoes escorting guests to some kind of awesome patterned uniform paddling through speeches and entertainments to feasting. It was a unique celebration of an achievement, a milestone of historic proportion in East Kwaio.

The double storey classroom is a permanent structure that is made of concrete and timber. There are 3 classrooms at the top floor and the other three classrooms at the bottom floor. It costed SBD1.4m and will directly benefit more than 300 students.

Waneagu CHS is situated on higher grounds overlooking Atoifi compound and beautiful Hiuru harbour rendering the new classroom a perfect and an ideal learning environment where cool breeze will forever be unforgiven by heat and humidity.