Premier for Malaita Province Hon. Daniel Suidani delivering his speech during the inaugural opening and handing over of Ambu Sinasu's CHS Hall on 14th August 2022

Speaking during the official opening and handover of a PCDF funded Community Hall in Ambu village near Auki on 13th August 2022, Premier for Malaita Province, Hon. Daniel Suidani stated that for generations forefathers of Malaita have valued the virtues of unity, togetherness and cooperation as the basis for industriousness. 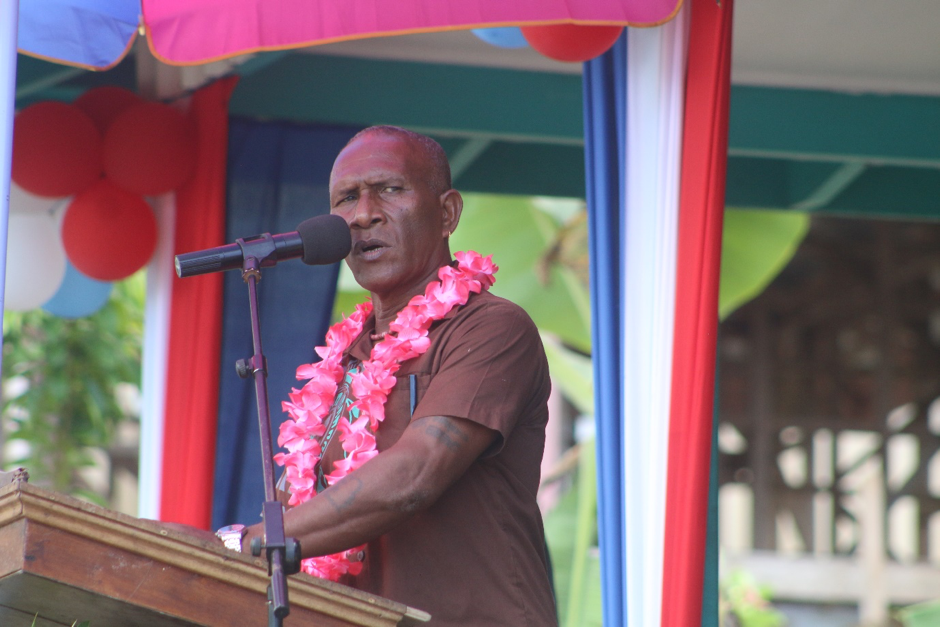 MPA for Ward One Hon. Timeus Waledala giving his speech during the opening and handover of the Ambu Sinasu’u Hall on 14th August 2022

He said, he strongly believes that its these same principles of working-hard-together today that has caused everyone to gather for the celebration of what he termed as a milestone achievement. He stated that Malaita Provincial Government sees the industriousness in every community and urges everyone to maintain the oneness in heart in serving and delivering services for the betterment of the life of the people.

Hon. Suidani stated that he is convinced that what is being witnessed and handed over is the fruit of something-good that the founders of Ambu envisioned and entrenched in the desire to work together and that that something-good must be protected and harnessed. “Friendship and unity with good deeds are something that young generations at Ambu, and other places of Malaita and Solomon Islands must hold dearly onto it, strongly”, he urged. 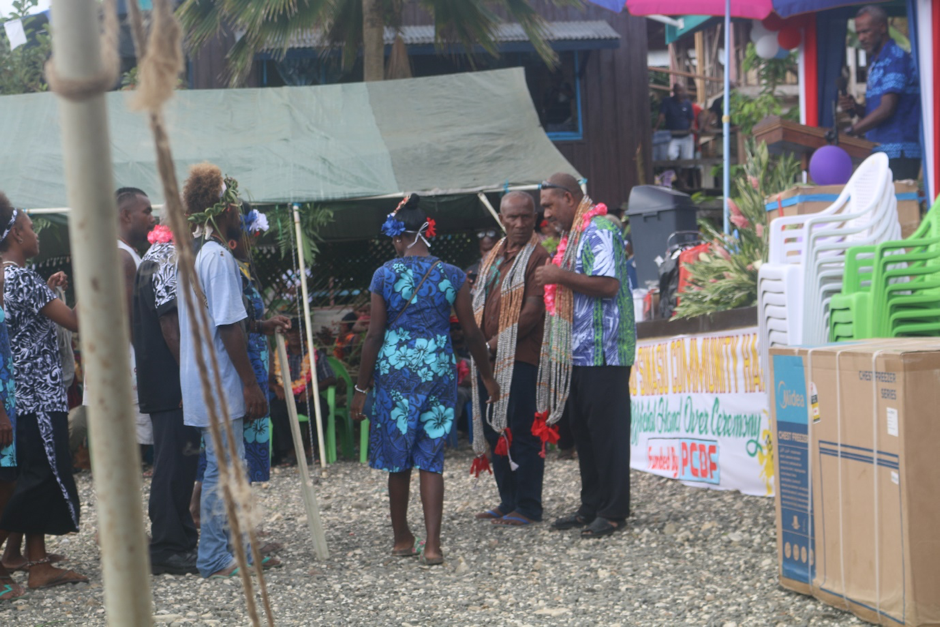 MPA for Ward One Hon. Timeus Waledala and PS for MPGIS Mr. Stanley Dick Pirione being gifted with tradional shell money by the youths of Ambu

Premier Suidani acknowledged the National Government through the MPGIS for the PCDF and assured that the Province will do its best to perform to the requirements of the fund. He added, “The Provincial Planning Team must be commended for their hard work, the Contractor for his expertise, and Ambu Community for the collective support that has resulted in the successful completion of the project”. He strongly urges the Ambu Sinasuu CHS, Ambu Community, and the Churches to not only own the gift as an asset but to also look after it well so that future children of Ambu can also enjoy using it.

Speaking earlier, Member of Malaita Provincial Assembly for Ambu Ward One, Hon. Timeus Waledala outlined the background of the project which he described as facing obstacles after obstacles at its early stages. He emphasized that in spite of the challenges faced, with sheer determination and political will the project was duly completed and was being handed over accordingly.

He said it was indeed a learning experience for him as together with the Provincial Planning Team, they all sought after the necessary requirements of the project in accordance with procedures. A long story short, he said the rest is now history and he applaud Ambu community for the continued support and urges everyone in the Ward to continue to render the same support as they venture together into managing the usage of their community hall for the benefit of all. 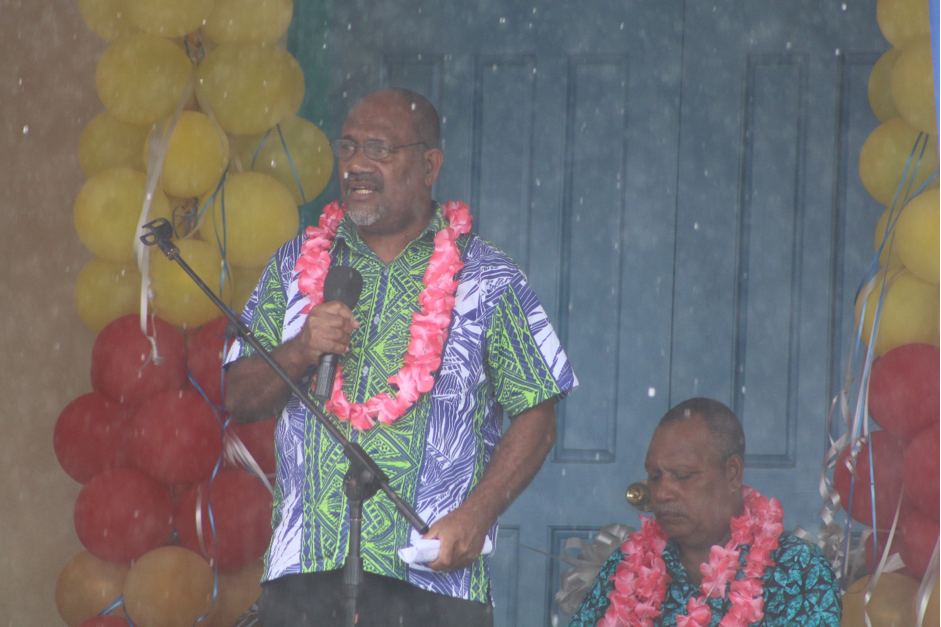 PS for MPGIS Mr. Stanley Dick Pirione delivering his key note address during the opening and handing over of the Ambu Sinasu’u Community Hall on 14th August 2022

Hon. Waledala acknowledged specifically the PS for MPGIS who also hails from Ambu for also supporting the project. Chairman of the Sinasuu CHS Board Mr. Whitlam Saeni, Provincial Engineer Mr. Teddy Irumai for the bill of quantities, and Mr. Eddie Famauri for the design of the building. He said these individuals offered their expertise and advices free of charge.

Speaking as Guest of Honour on behalf of the Minister for MPGIS Hon. Rollen Seleso who could not make it on medical grounds, Permanent Secretary for the MPGIS Mr. Stanley Dick Pirione was very pleased with the completion of the new hall stating that it is going to be a vital part of the Ambu community. PS Pirione said, the hall will serve a s a beacon of hope through various training programs, outreach activities and accommodation. 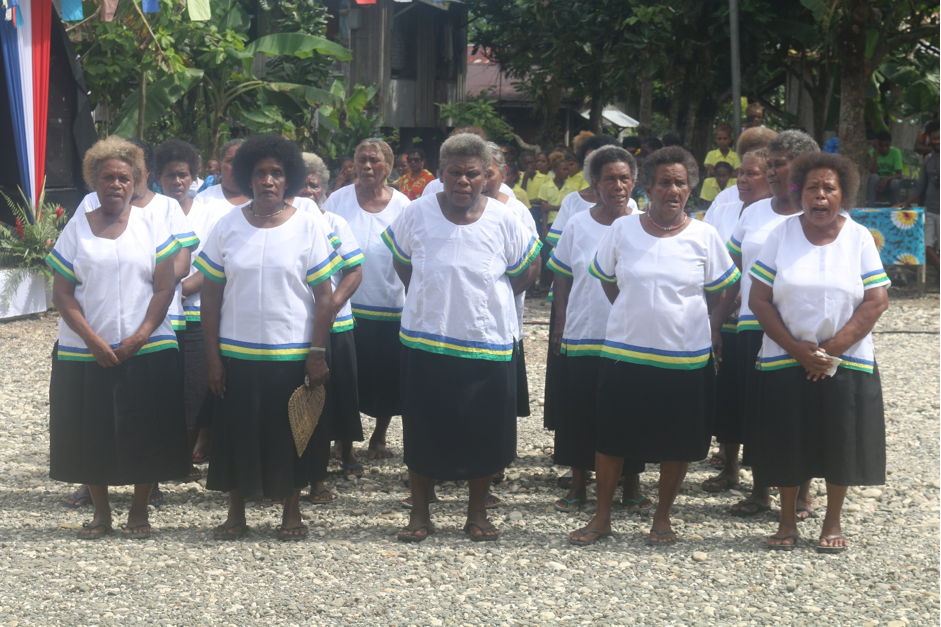 Mr. Pirione stated that it was not easy to have such an expensive building and Ambu community should count it a blessed gift that comes at a time when other communities are struggling to own such magnificent infrastructure. “We should all be proud of this achievement that comes about with funding from our National Government through the MPGIS known as the PCDF”, he explained. He added that the PCDF is a conditional fund that is paid only to Provinces that perform and meet certain pre-determined criteria.

He applauds the Premier and his Executive for working closely with Provincial Planning Team, the Works Department, and Finance and Treasury the result of which culminated in the timely completion of the two projects, a Waneagu CHS Classroom in East Malaita and now a Ambu Sinasuu Community Hall. PS Pirione congratulated the Province for such concerted efforts and strongly urged them to continue with the good hard work so that the Province can qualify to the fund hence bringing more services closer to the people.

He stated, “It is because of the hard work of you the Provinces and us at the Ministry that all of us together we managed to convince more Donor Partners such as the EU’s $78m WatSan and education and World Banks USD25m for Integrated Economic Development and Community Resilience for the next 5 years”. He added that more financial resources are coming but Provinces need to work a bit harder to deserve a qualification. He extended his gratefulness to the TD Contractor Mr. Johnson Sabeli and other elders of Ambu for the splendid job in completing the project.

Representing the Churches, Pastor John Bakila Idutee spoke of team work, the vision, the unity, and partnership as fundamental to the success of the project. “Our collective can impact the lives of individuals and make a big difference. And if we act in the Spirit of togetherness as the bible says we can move mountains”. Ambu community may have not moved a mountain, but they have certainly achieved a milestone of huge proportion. He appealed to every one to use the building with reverence and respect as it is a blessing to have such a building. 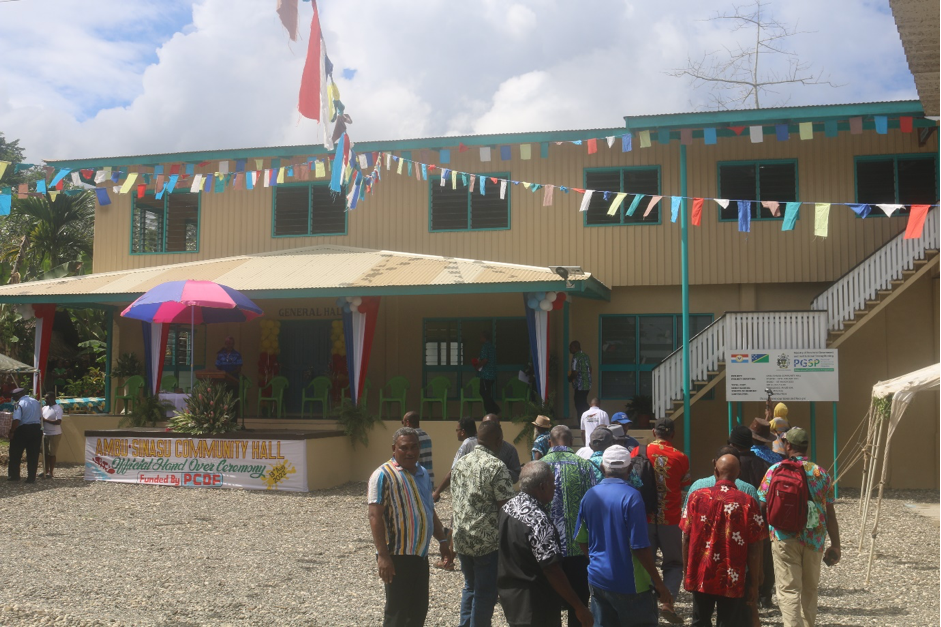 Another speaker who spoke on behalf of the school was Mr. Maena Tuita who referred to the building as an icon that would go a long way in assisting the Sinasu’s CHS achieve its vision, mission and goals. He said the hall will benefit the school in terms of ceremonies such as graduations, price giving and even school meetings. It will also accommodate staffs and board members during board meetings. “This icon building will contribute in promoting education through workshops, and trainings and learning of our kids”, Maena stated. He said the students and the community have the duty to take care of the building as their own so that it lasts longer into the future.

Delivering the first celebration speech of the day, Ambu Community rep Mr. Oliver Oli went through a brief history of the community hall or table house as they used to call it in those days. He said it was in 1918 that Ambu land was given to the SSEC Church and in 1920 the first church was erected along with a temporary table house. In 1949 the first temporary church was replaced with copper roofing and since then the desire for a permanent community hall or table house grew ever stronger. Late Harry Toliabu was the first pioneer to lay the foundation of the hall, then several years later was joined by late Jack Dolaiasi and Billy Teteano who set up the pillars until 1964 when SSEM was changed to SSEC in a meeting of SSEM leaders.

Mr. Oliver said the foundation that was laid and the pillars that were erected by the pioneers stood the test of time and faced mockeries and labelled as “Ark of Noah”. “Today we have a modern magnificent Ark of Noah and we would like to thank the National Government through the MPGIS and the MPG for this wonderful gift. We just can’t express how extremely happy we are for this magnificent gift”.

The prominence of the building is very obvious in terms of sheer size and quality comprising of a large general hall with a kitchen at the ground floor, and Nine accommodation rooms and conference room with a reception and kitchen at the top floor. The building is a two-storey made of a ground concrete slab a top timber flooring with a total cost of $1,365,716.00.