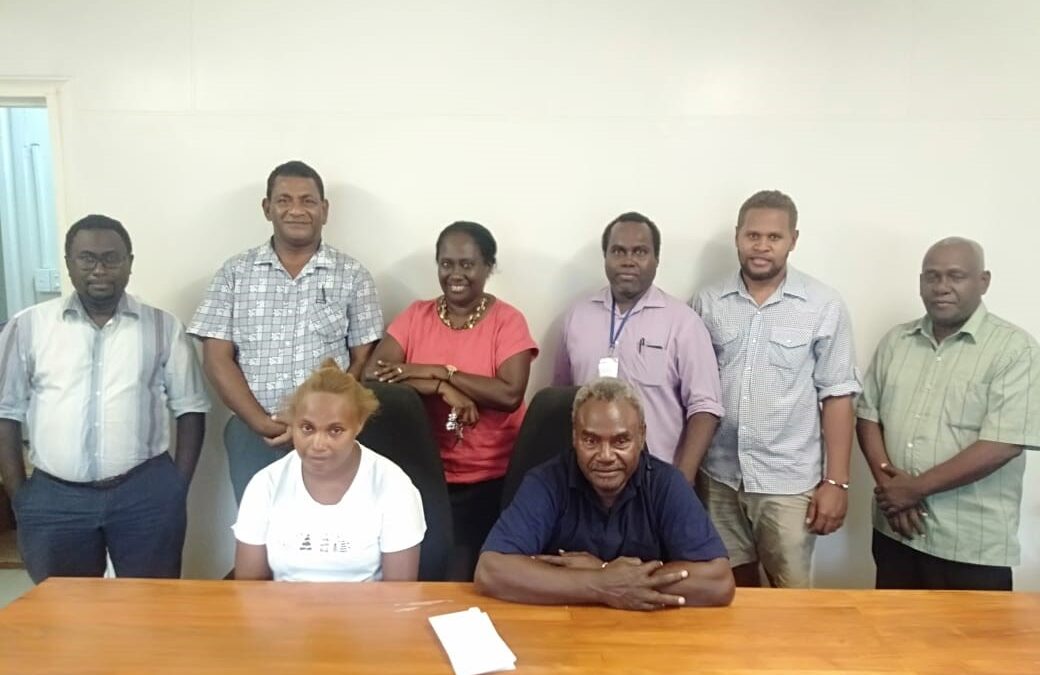 Group Photo: David Teveko and daughter sitting at front with MHMS PS Pauline McNeil (Centre Back) and MHMS executive members at the back.

The Ministry of Health and Medical Services (MHMS) executive and staff this week raised through personal contributions a sum of almost 4,000 dollars for the two nurses who survived the terrifying 20 days ordeal at sea drifting from Temotu to Makira, Ulawa province.

On 11th of July, the two nurses with four other people left Manobo in Temotu province destined for Lata, the provincial capital of Temotu province when their boat capsized due to bad weather and rough seas. Though they manage to salvage their sinking boat by swiftly detaching the horse-powered engine from the boat, they lost everything including their paddles, which left them miserably hopeless and at the mercy of the sea current to bring them back ashore.

A major search and rescue operation was mounted for the six by relevant authorities with fading hopes as the days passed. Fortunate enough for them, the current was on their side and for 20 days they had drifted a terrifying and unimaginable distance of more than 400 kilometers from Temotu to Makira Ulawa province. The sea current was in their favor.

All six landed safely at Ulawa in Makira without any major injury or sickness.

Although one of the nurses had already left for Temotu earlier on this week from Honiara, David Teveko the other nurse had the opportunity to receive the money on their behalf. “I thank the Permanent Secretary and your executive including staff of MHMS head quarter for your kind personal contribution to me and my colleague. We are grateful for this”, said Mr.  Teveko.

57 years old Teveko who still practices nursing today since the early 1990s added that by sharing the traumatic experience it really helps the healing process. “I am glad not only to receive the cash but also to be sharing this very frightening experience with you all as it helps me to recover from the trauma it has caused”,

National Director of Nursing Mr. Michael Larui responsible for coordinating staff contribution for the two nurses in handing over the funds raised stated that the Ministry is overwhelmingly happy that the duo and the others survived the devastating 20 days at sea.  “Funds gathered and handed to you today is part of MHMS executive and staff celebrating with you and your family for overcoming a deadly situation that could have turned tragic”.

Mr. Larui also thanked the generosity of all who have contributed towards the two nurses. “Your personal contributions are highly commended and demonstrates your support and care towards our colleagues who are still recovering from the traumatic experience. I would also like to acknowledge those who have also taken time to attend the thanks giving prayer held recently for the six survivors”.

David Teveko will be returning soon to Temotu Province to continue what he has been doing for most part of his life, nursing the sick.