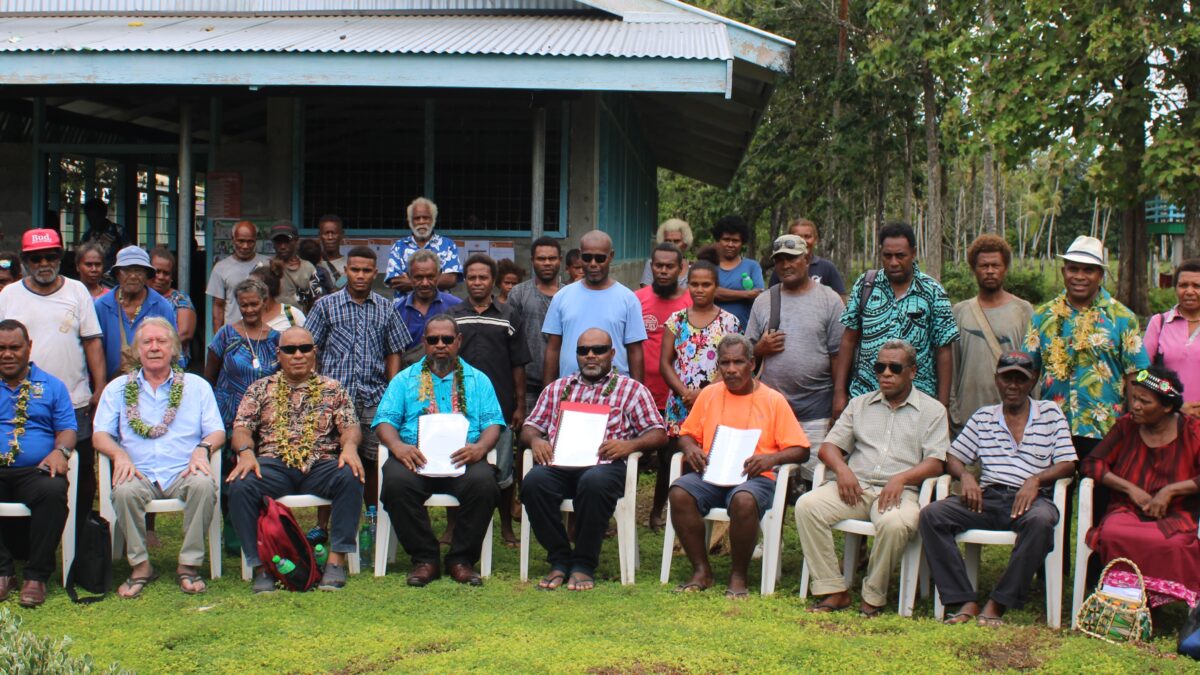 The Bina Harbour Tuna Processing Plant (BHTPP) Project reached a major milestone when the trustees representing the Bina -Talifu Land had publicly signed the Trust Deed for the key parcels of land required for the project at Bina Village on Malaita last Thursday 15 September, 2022. The signing establishes the governance over the key land parcels for the project.

Execution of the Trist Deed is a key legal document that sets out the terms and conditions by which the members of Bina-Talifu land owning groups settle the property with the trustees for the use and management of the land for the benefit of the beneficiaries.

The signing ceremony is the culmination of litigation and settlement work by the Ministry of Fisheries and Marine Resources (MFMR), its services providers and a mark of success by the overall leadership of the MFMR with support from the Mekem Strong Solomon Islands Fisheries (MSSIF), the Malaita Provincial Government, and the land owners.

The initial work and consultations with the Bina communities and legal drafting work on the Trust Deed stretched from 2015 to end of 2021, and with the various delays in litigation, COVID-19 and other factors, this signing ceremony has just become possible.

The formal signing of the Trust Deed sets the way forward for setting up the Bina-Talifu Charitable Trust and that will follow by other corporate requirements such as obtaining the TIN (Tax identification number) and business licenses for the various land owner enterprises that are anticipated.

The project has also made commitment to develop capacity of the trust to develop into a responsible landlord protecting the interests of landowners but also investors.

The signing also determined that all the land related matters have been settled and this sends an important message to potential Bina investors and our development partners.

During the signing ceremony, the Bina-Talifu Trustee’s representative, Mr Dickson Maearia, applauded the Government of Solomon Islands and supporting partners for their commitment in financing the different phase of the project to date.

The Deputy Premier of Malaita Province, Hon Glen Waneta in his official remarks has acknowledged the MFMR for its perseverance in progressing and keeping the Bina Project alive. He said “the MARA Provincial Government acknowledges your steadfast guidance in ensuring this project continues to its fulfilment”.

The Deputy Premier continue to say that “this event is a very significant one for the elected trustees and their respective beneficiaries. This is your big event and we the government officials here today to bear witness to your courage in finally entering into this feudal relationship”.

The MPG will continue to support the project under the terms of MoU signed with the Ministry, said Hon Waneta.

The Minister of Fisheries, Hon Nestor Giro in his opening remarks has acknowledged the people of Bina Harbor and the Malaita Provincial Government for hosting this important project.

He said their cooperation with the Bina people started in 2015 which contributed to the crucial milestone achieved today.

In concluding his remarks, Minister Giro noted that the signing ceremony is a historical event that marks another milestone achievement in progressing the implementation of the BHTPP Project. He said “the signing ceremony has reached a momentous milestone and become a crucial and best event that will be recorded in history.” He called for continual commitment of all stakeholders to the project until the project is fully realised.

Activities to follow in the wake of the signing of the Trust Deed include a feasibility study of the water supply and wastewater management for the project and ongoing consultations with water source landowners and those holding custom/kastom rights to the harbour.