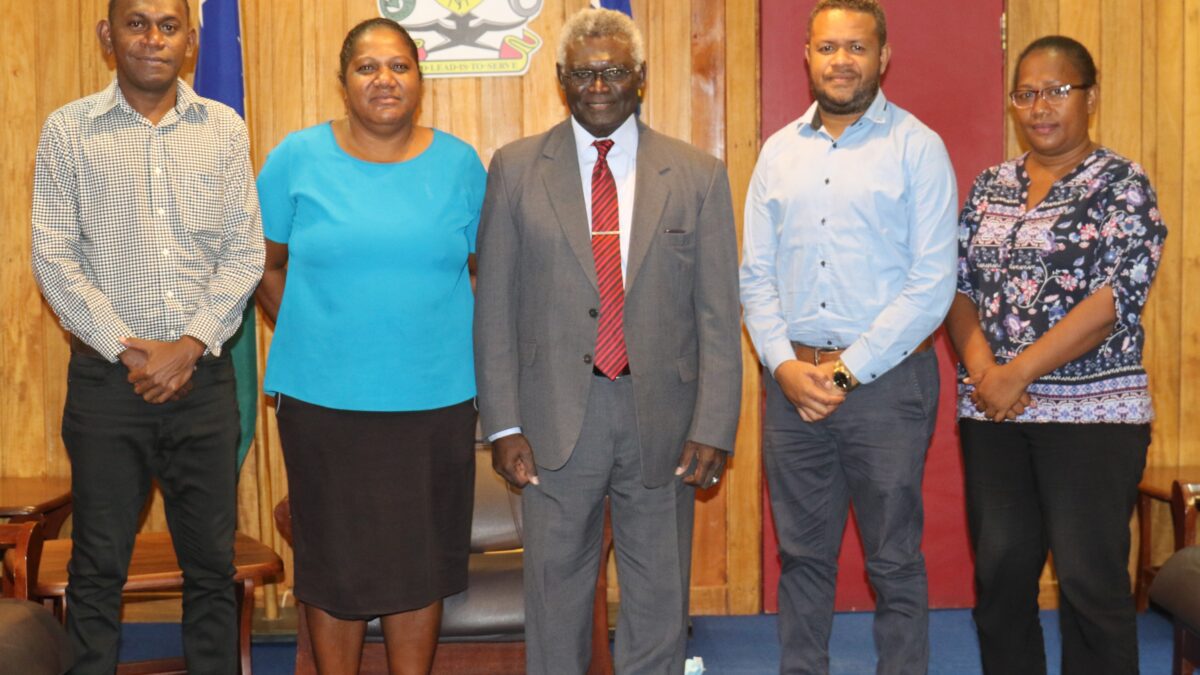 Prime Minister Sogavare and members of the MASI executive

MASI president Georgina Kekea thanked the Prime Minister for availing his time to meet with MASI.

Ms Kekea also updated the Prime Minister of the current plans of the MASI Board and the challenges faced by the media industry in the country.

The MASI president also acknowledged the Prime Minister who is also the patron of MASI for recognizing the important role played by the media in the country.

She said a Media Practitioner’s Bill is the way forward for the media industry.

“As a responsible body, MASI would also like to regulate and accredit journalists so that we can be seen as professionals and we can also face consequences for our mistakes,” she said.

She adds the Media Practitioner’s Bill must not be seen as imposing restrictions on freedom of expression but rather it is to safeguard the work of journalists in the country.

“The journalism profession is the same as all other professions and must be regarded and respected as such”, Ms. Kekea said.

MASI Vice-President Douglas Marau added that this Bill will encourage media practitioners, through MASI, to formulate codes of practice to govern their conduct.

Mr Marau also highlighted that MASI acknowledged the concerns raised in Parliament by the Prime Minister on the need for ethical reporting.

He said these sentiments were not only raised by the Prime Minister but many other leaders in our society.

“That is why, this proposed Bill will also help to promote media ethical standards and also hold individual journalists accountable if the media code of conduct are breached,” he said.

Mr Marau also informed the Prime Minister that the Pacific Islands News Association (PINA) Summit, which was postponed in May last year, has been further delayed because of the Covid 19 pandemic.

He said Solomon Islands will still host PINA when the situation returns to normalcy.

Prime Minister Sogavare in response has acknowledged the important role media play in the country.

The Prime Minister said Solomon Islands is a country that continues to uphold free media and people are free to share their views; but must be done with great responsibility.

Prime Minister Sogavare is also impressed with the ongoing consultations done by MASI on the proposed Media Practitioners Bill, stating that it is the way forward.

Prime Minister Manasseh Sogavare also accepted the invitation by MASI to be guest of honor at the Media Freedom Day celebrations on Monday 3rd May 2021.

Meanwhile, the Prime Minister has also affirmed his continuous support for the annual ‘Prime Minister’s Scholarship Award’ for this year.

The scholarship award is an initiative by the Prime Minister Sogavare as patron to grant government scholarship to journalists each year based on recommendations by MASI.